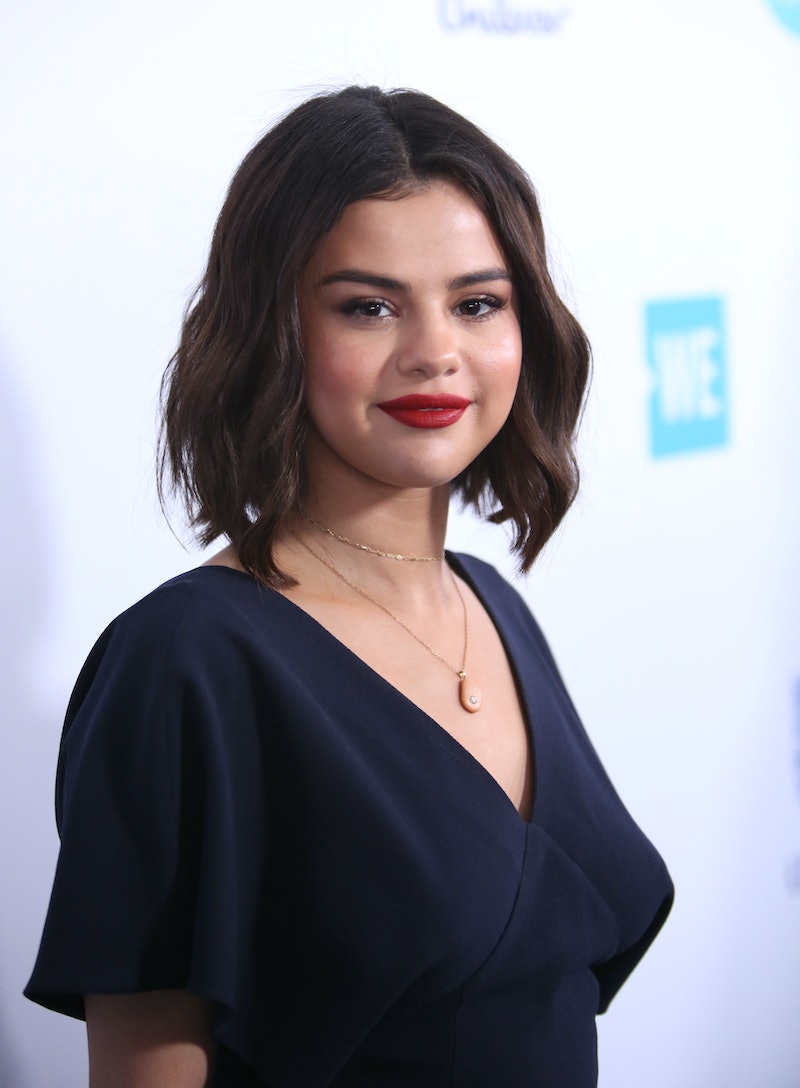 Selena Gomez just dropped a brand-new single "Back To You" on Spotify, along with a lyric video on YouTube. Catchy and instantly memorable, it's an early contender for song of the summer. So, is Selena Gomez's new song about Justin Bieber? The lyrics describe a dramatic up-and-down relationship, which gives fans a few ideas. Gomez and Bieber have dated on and off since 2010, when they had their first date at an IHOP restaurant in Philadelphia.

In between, they've dated a number of other high-profile celebrities, with Gomez reportedly inspiring songs by both Bieber and rumored ex The Weeknd. An earlier hit by Gomez — titled "The Heart Wants What It Wants" — is about her previous relationship with Bieber, so is "Back To You" a sequel to it? It certainly seems that way.

In "Back To You", which Gomez wrote for the upcoming 13 Reasons Why Season 2 soundtrack, the singer describes a relationship that keeps breaking her heart — before it puts it back together again. It's like a more mature sibling to "The Heart Wants What It Wants." In the earlier song, the actor and pop star was resigned to loving Bieber no matter what. With "Back To You," it seems she's celebrating it. Regardless of what happens in their time apart, Gomez finds it reassuring that she ends up with this person — presumably, Justin Bieber — again. One catch: The couple reportedly broke up a few days before the May 9 release of the song, according to Us Weekly.

Here's a sample of "Back To You" lyrics that really make it sound like Gomez wrote the song about Justin Bieber:

"We never got it right

Overthinking every word and I hate it

'Cause it's not me, and what's the point in hiding?

Everybody knows we got unfinished business

You could break my heart in two

But when it heals, it beats for you

I know it's forward, but it's true:

I wanna hold you when I’m not supposed to.

When I'm lying close to someone else,

You're stuck in my head, and I can't get you out of it.

If I could do it all again, I know I'd go back to you"

Unless there's another person Gomez has had an on-again, off-again, life-changing, heart-breaking-and-healing-and-breaking-all-over-again relationship with that isn't Justin Bieber, this is definitely a song about him. It's made all the more poignant by the fact that Gomez reportedly broke up with Bieber early in May. An unnamed source claimed to Us Weekly:

“Selena started seeing the bigger picture when it came to their relationship, like what was more important: her general happiness and her family and friends approval, or her being together with Justin, where no one really supported their relationship. She obviously chose happiness and her friends and family and is so thrilled about her decision-making process. She feels more empowered than ever and is looking forward to this next chapter.”

Again, this insight comes from an unnamed "source," so it should definitely be taken with a grain of salt. However, the lyrics also seem to back up the quote, especially the "we never got it right" line.

The "Back To You" release also includes a new video from Gomez, and the video features a Bieber lookalike. At this point, she'd have to work pretty hard to convince fans the song isn't the saga of Selena and Justin. While "Back To You" is a single from a forthcoming soundtrack, Gomez has also talked about having a full album on the way. This is likely just the first of many Gomez songs listeners will be analyzing this summer.