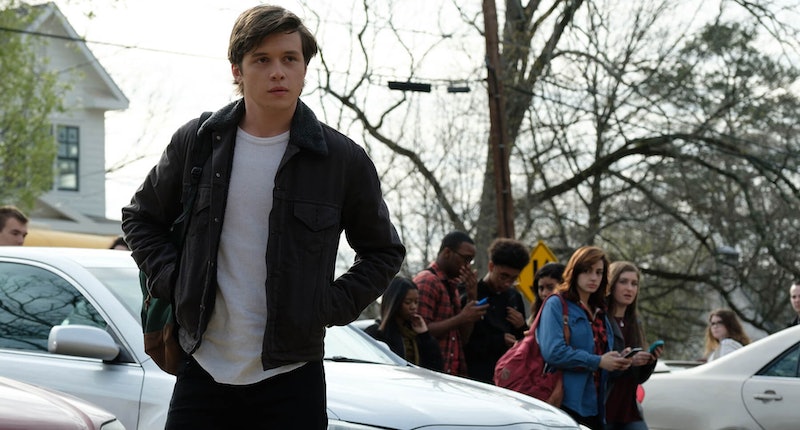 Spoilers for Love, Victor episode one. It's Pride Month, which means that all types of LGBTQ content will be given the spotlight all throughout June. One of the most notable has got to be the new Hulu series, Love, Victor. The series, which premieres on June 17, is a spinoff of the acclaimed 2018 rom-com Love, Simon. That movie was considered a landmark film for LGBTQ media, as it was the first mainstream studio film to depict a gay love story in a high school setting. With the movie's stellar reviews and enormous popularity, it would seemingly make sense to see Simon in Love, Victor as well. But does the character show up in the spinoff, or are the two shows not that closely related?

Love, Simon tells the story of — you guessed it — a kid named Simon. Portrayed by actor Nick Robinson, Simon is a 17-year-old closeted high schooler who hasn't told a soul he's gay. That is, until an anonymous kid purportedly from his same school starts posting online that he, too, is secretly gay. Simon begins to develop feelings for this online mystery man, leading him on a path of self-discovery.

Love, Victor tells a similar tale. It's about 16-year-old Victor, who has just moved to the town where Love, Simon took place. He is confused about his sexuality, and for advice, he begins writing Simon — who is now regarded somewhat as a minor celebrity in the town. This set-up allows the movie character to feature pretty prominently in the series, as Robinson is reprising his role as Simon for Love, Victor. The character's voice for sure will be heard in every episode as the series' narrator, and he is also rumored to perhaps appear on-screen in a cameo.

While fans of Love, Simon will no doubt be happy to hear that Nick Robinson is involved in Love, Victor (he also serves as an executive producer on the series), it should be noted that the two projects have some considerable differences, mainly in the realm of representation. In the movie, Simon was a white kid from a relatively wealthy family. His parents were happily married and liberal, and there really wasn't a ton of danger awaiting him when he decided to come out of the closet. Love, Victor, however, is another story.

Victor, portrayed by Michael Cimino, is Hispanic and a person of color. His family is not wealthy, and they don't live in a fancy house. His family is religious and conservative, and are far less welcoming toward homosexuality than Simon's family was. Victor's parents are also on the road to divorce, which adds another destabilizing factor to his home life that Simon simply didn't have to deal with. In other words, Victor faces challenges that are far greater and more numerous than what Simon went through, which should make his eventual victories feel that much bigger by comparison.

Love, Victor has some pretty strong ties to Love, Simon, but it's not just a rehash of the same story — even if it does feature the voice of Simon throughout.

More like this
Pamela Anderson’s Dating & Marriage History Could Be Its Own TV Series
By Jake Viswanath
Pamela Anderson's Sons Brandon & Dylan Have Their Own Hollywood Careers
By Arya Roshanian
Wait, Is Barney Stinson Related To Sophie On 'HIMYF'?
By Gretchen Smail
The Mysterious Gunther Corporation From 'Gunther’s Millions' Has Dissolved
By Brad Witter
Get Even More From Bustle — Sign Up For The Newsletter
From hair trends to relationship advice, our daily newsletter has everything you need to sound like a person who’s on TikTok, even if you aren’t.