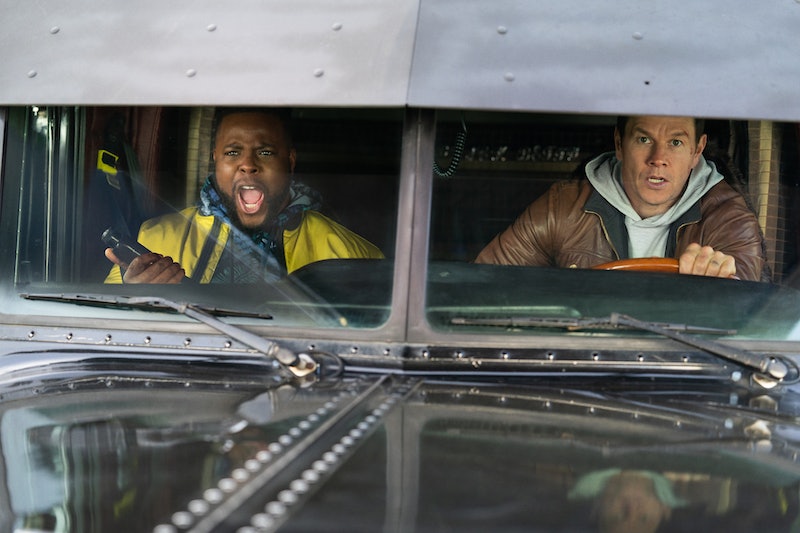 The Mark Wahlberg and Winston Duke-led action comedy Spenser Confidential premieres on Netflix on Mar. 6. The film takes its inspiration from a mystery novel of the same name, which has undergone several adaptations. It's been turned into to a television show, made-for-TV movies, and now, a big-budget action flick. In case you need a little help understanding all these prior iterations, here's our breakdown on the origins of Spenser Confidential.

At the center of Spenser Confidential is Spenser (Wahlberg), a loose cannon ex-cop from Boston who partners up with his MMA fighter pal, Hawk (Duke) to solve crimes. Also along for the ride is Spenser's ex-girlfriend, Cissy (Iliza Shlesinger), and together, the three take on a case involving some of Spenser's old colleagues, who have mysteriously turned up dead. Opposite Spenser's crews fight for justice is an inmate named Squeebe, played by musician Post Malone in his first acting role.

Spenser's roots lie in a series of detective novels written by author Robert B. Parker between 1973 and 2011. Parker wrote over 40 novels in the series, with four of them having been released posthumously. Two years after Parker's passing in 2010, author Ace Atkins picked up the series. Atkins' second novel for the franchise, Robert B. Parker's Wonderland, forms the basis of Spenser Confidential.

And as previously mentioned, this film isn't the first time Spenser's been pulled from page and put on screen. Spenser: For Hire, a television show based on the detective starring Robert Ulrich, ran on ABC for three seasons between 1985 and 1988. Ten years later, Joe Mantegna took up the Spenser mantle, bringing the character to life in three made-for-television movies on A&E between 1999 and 2001.

In the trailer for the Netflix adaptation, Spenser and Hawk start out at odds with each other. Spenser's just been released from prison only to find out he's got a new roommate, Hawk, at the house he shares with his friend, Henry. But eventually they grow to become partners and pals.

Duke touched on that blossoming friendship between Spenser and Hawk in a chat with Variety, saying, "The overall message is that family is family, no matter how you make it. A lot of us are born with family, some of us inherit family, some of us create family and this movie is a family story." The film's co-writer, Sean O'Keefe, agreed, saying, "It’s a movie about brotherhood between these characters, Spencer and Hawk, the likely bond that they form over the course of the movie."