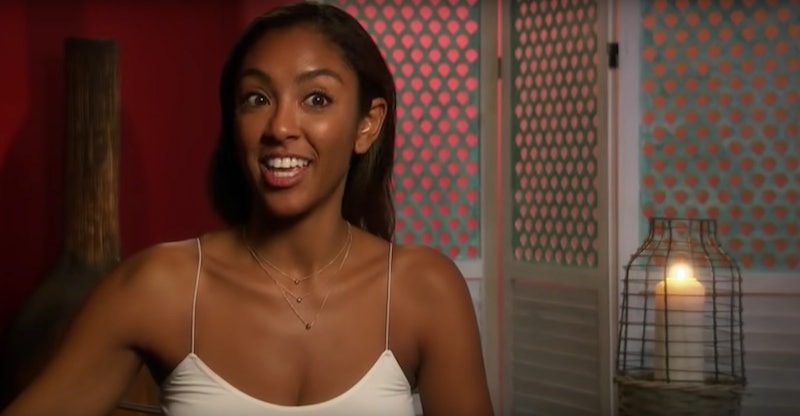 Tayshia was a frontrunner all season on The Bachelor, but now that Colton and Cassie seem to have thrown this season completely off the rails, things don't look great for her. It seems likely that Colton will break up with Tayshia and Hannah G. when the show returns, and she'll have to make some alternative plans. So is Tayshia dating anyone after The Bachelor?

Unfortunately right now, all we can do is speculate. The women of The Bachelor are sworn to secrecy regarding what happens during their time on the show until it airs, so she definitely isn't at liberty to divulge if she's got a new man in her life. But her social media does promise that regardless of her relationship status, Tayshia is living it up. Her latest Instagram post shows her soaking up the sun on the beach, with the caption "Never taking a moment for granted."

She can also be seen in her feed out for drinks, traipsing through Paris, and hanging out a New York Knicks game. It's unclear if there's an Instagram boyfriend helping her nail these shots, or if she's taking a breather from dating after all the drama Colton turned out to be. But either way, she's having a good time.

Tayshia has been a standout contestant in more ways than one — not only did she fall hard for Colton, but she also reflected on her painful divorce, making her one of the only divorced contestants we've seen speak much about that chapter of their lives. In an Instagram post after the episode aired, she said how much that divorce conversation with Colton meant to her:

"It proved that I am stronger than I ever thought I was because I opened up about my biggest “failure” and it made me EXCITED for the life I have ahead of me!!! I owe this revelation to Colton, as he’s the one who challenged me out of my comfort zone and pushed me to want to be the best version of myself. He didn’t just listen to my story, but he comforted, empathized, and respected me, and those are qualitIes of an amazing man!"

She definitely seems to have learned a lot about herself throughout The Bachelor, which could serve her well in future relationships. She's always seemed very poised, self-aware, and mature, even despite her few spats with some of the other women in the house. All things considered, Tayshia seems like she has tons of qualities that would make her a great partner for whoever she ends up with.

And who knows! Maybe Colton will have a change of heart, realize Cassie isn't ready for a relationship or simply isn't into him as much as he's into her, and go back for Tayshia or Hannah G. Maybe Tayshia and Colton are living happily ever after as we speak! OK, probably not. But Tayshia and Hannah G. don't deserve that, anyway. Hopefully whoever comes into Tayshia's life next will do so for the long haul, and won't be jumping any fences.