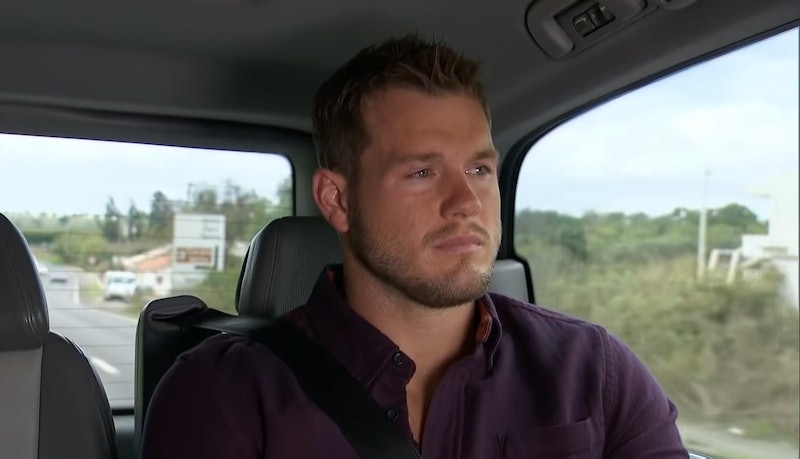 Colton jumping the fence and seemingly leaving The Bachelor doesn't just mark a shocking end to his season — it's also a huge first for the franchise, as no Bachelor has ever quit before. Many contestants have left the show for a number of reasons over the years, including Elyse, Sydney, and Heather this season. But Colton is the first lead to ever break up with the reality TV show. And while you might think the top brass at ABC and The Bachelor would take issue with Colton's decision, it turns out they're nothing but supportive. After all, The Bachelor is all about Colton finding whatever will make him happy — and it probably doesn't hurt that his conflicted emotions have also made for extremely entertaining TV.

Colton has been keeping quiet about how his Bachelor season will end, but he has been open about his temporary hiatus from the show. The day after his season premiered, Colton told Entertainment Tonight that he really did walk away from the show following that fence jump. "In the moment I was gone. There was no Bachelor," Colton told ET's Lauren Zima (who just so happens to be Chris Harrison's girlfriend).

Colton said that he needed this moment of alone time and self-reflection to process what he had been through, which fans know now was Cassie leaving. "I just needed to be by myself," Colton said. "There was nobody on the other side of that fence, so I needed to get out and just get gone."

Robert Mills, ABC's senior vice president of alternative series, specials, and late-night programming, also spoke to ET about Colton's quitting. He noted how when he had heard about it, he found this first for the franchise exciting. "To be honest, I got kind of excited. It's something we've never seen before. To be more than 20 seasons in and have something new that no one's seen before play out is actually great," Mills said.

ET also got the insight from a former Bachelor himself, Nick Viall, on the situation. Nick joined Zima for her "Roses and Rosé" recap show for Colton's sixth episode. Zima asked if Nick ever considered leaving the show and he replied, "There were certainly moments where I wanted to. I think every lead has that moment." You can hear Nick discuss the pressures that the Bachelor and Bachelorettes feel at 18:30 in the below video.

Harrison confirmed Nick's assertion that many of the leads have considered quitting at one point or another to ET in an interview before the infamous fence jump aired. "I mean, it happens a lot. It happens more than you think," Harrison said. "There's varying degrees of it, there's varying degrees of getting fed up in how you express your anger, in how you express your emotions. [Colton] happens to be the most athletic SOB we've ever had, so he was able to express it like an Olympian [by jumping over a fence and quitting], but they all get there."

While no other Bachelor or Bachelorette has ever been as officially done as Colton was, Harrison did say the situation made him think of Bachelorette Rachel Lindsay. "Rachel is someone who comes to mind, who was unbelievably headstrong. Being a lawyer, I think she was just more authoritative and more articulate about it. And while she's also athletic, she kind of expressed [her frustration] in different ways," Harrison said.

The host and producer added how this headstrong-ness is important so that the lead ensures they are getting what they want. "One thing I love about any Bachelor or Bachelorette is when they're headstrong, and they're independent and they want things their way. This is their life, and I know it's entertainment, and I know we're shooting a show, but this really is their life," Harrison said. "They all kind of get to a pushing point where it's so serious for them that they just want things to stay on course. And when they feel like they're losing control, they fight for it back. And Colton was fighting for it, and kudos to him. I like that. I like to see the fight."

Even though he's the first lead to do, everyone in Bachelor Nation seems to support Colton's right to quit the show. But, in the end, Colton saw his famous role through. And you'll get to see how Colton's quitting and the aftermath plays out during the two-night Bachelor finale.