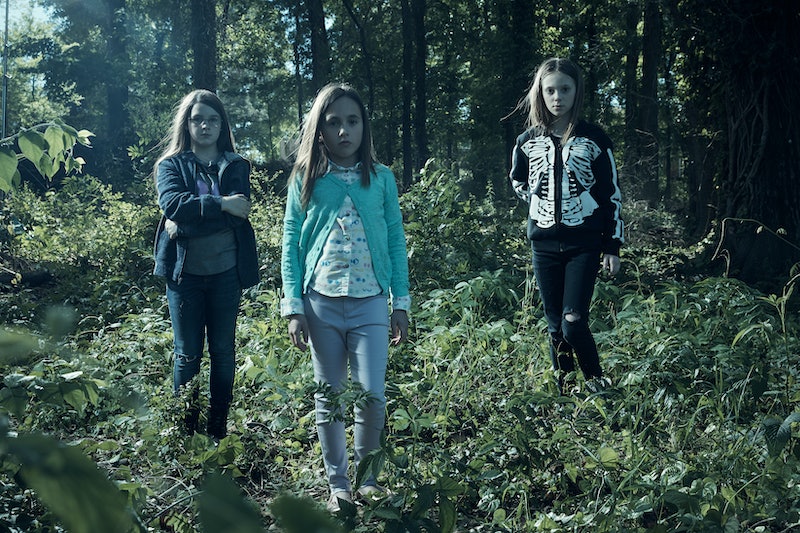 Lifetime is no stranger to movies about shocking murders. Sometimes, these dramas are simply creative tales, but the network’s upcoming movie Terror in the Woods is a horrific true story about two young girls whose addiction to a spooky Internet fable led to an unthinkable murder.

According to ABC News, 12-year-old pals Anissa Weier and Morgan Geyser lured their friend Payton Leutner into the woods and stabbed her 19 times in May 2014. Investigators said the girls were inspired by Slender Man, a fictitious character who kidnaps and kills children. Anissa and Morgan read fictional Slender Man stories on the horror website Creepypasta, believed he was real, and wanted to impress him by killing Payton, even though she was Morgan’s close childhood friend. The incident became widely known as the "Slender Man stabbing" and shocked the town of Waukesha, WI.

The aforementioned ABC News report also reveals that Payton survived the stabbing and was able to crawl from the woods to a nearby path. Luckily, a biker named Greg Steinberg spotted her lying in the grass and the wounded girl was able to give him vital information as he called 911 for help. While Payton fought for her life in surgery, the police located Anissa and Morgan on a nearby interstate ramp. According to the report, the girls said they were on their way to find Slender Man so they could live with him in his mansion. They were arrested and charged with attempted first-degree intentional homicide, as reported by The Chicago Tribune.

The Terror in the Woods synopsis reveals that Anissa and Morgan’s names have been changed to Rachel (Ella West Jerrier) and Kaitlyn (Sophie Grace) and the horror character is Suzerain, a clawed monster who lures children into the forest. Their parents think it’s a harmless ghost story, but the girls believe that Suzerain would hurt their families if they don’t offer it a blood sacrifice. So, they decide to stab their friend Emily (Skylar Morgan Jones) with a pair of scissors.

Emily survives the attack and the investigation brings up deeper questions about the Internet and mental health issues. Obviously, the Lifetime is taking some major liberties with the real-life story, but that’s not uncommon for a dramatization. Payton’s family doesn’t appear to be affiliated with this movie in any way and using real names and actual events could stir up legal consequences.

The film’s trailer takes a brief look into the psyche of Rachel and Kaitlyn as they begin to concoct their murder plan. The girls are talking outside of school and Kaitlyn asks Rachel if she ever sees things that aren’t really there. Kaitlyn says she has seen him (Suzerain) and warns Rachel that they have to kill someone to protect their families.

Scenes of the girls are interspersed with clips up an unidentified figure and several adults crying, presumably the girls’ parents. It’s a harrowing conversation between two innocent looking girls as they swing on the playground. Rachel and Kaitlyn are then seen in the woods with Emily as one of their voices counts down to the fateful moment. The clip is jarring and makes you think twice about the effect that dark parts of the Internet can have on kids. This Slender Man stabbing inspired story will definitely terrify Lifetime watchers. The network will dive into this horrifying true crime when Terror in the Woods premieres on October 14.