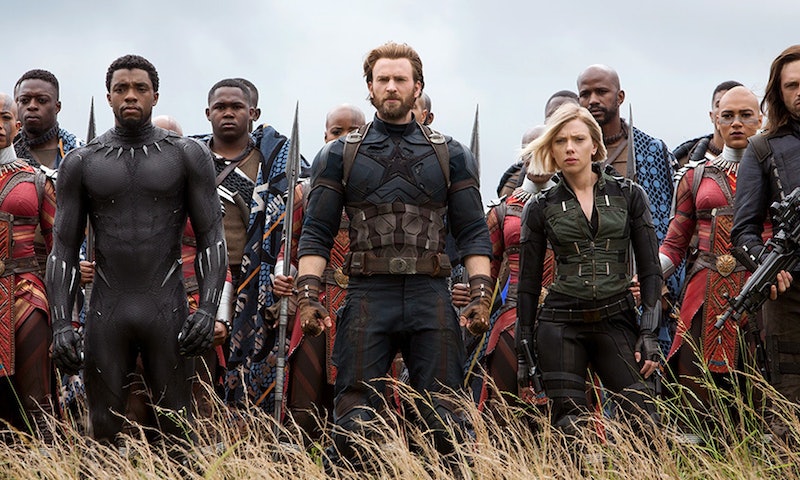 Without a host this year, the fate of the Academy Awards is in danger. Well, kind of. Some viewers are likely skeptical about how the show will proceed sans a trusty leader — earlier this year, though, there was speculation that superheroes might end up saving the day. So, is The Avengers cast at the 2019 Oscars? It's probable that some of them might, ahem, assemble for the occasion, and they could end up being a pretty significant part of the show.

After Kevin Hart decided to step down from hosting the Oscars in the wake of his ill-fated Twitter controversy, it wasn't clear whether or not the Academy would end up replacing him. But now that Hollywood's biggest night has finally arrived, and we know that the show will officially go on without a host.

So, how will they navigate between all of the categories, speeches, and performances? Who knows. Viewers won't have long to wait and see, but back in January, The Hollywood Reporter suggested that the cast of The Avengers would be on hand to help.

At the time, according to a source for the outlet, the Oscars were considering "a rotating cast of stars to introduce various segments." The source also reported that there would be "as many big-name cast members from Marvel's sprawling Avengers franchise as possible."

Now, there are a lot of actors in the Avengers world. Like, a lot. In fact, a total of 20 films featuring the franchise's many characters have been released over the course of the last decade, with three more to come in 2019. As for which of them will show up at the Oscars, though, there are at least a few that fans can count on.

Both Brie Larson and Samuel L. Jackson from the upcoming Captain Marvel movie (Jackson appeared in Nick Fury as well) were previously confirmed to be presenters this year, and have already been spotted walking the red carpet.

There are a ton of other stars from the Marvel universe who will be presenting at the show as well, including Chris Evans (Captain America), several members of the cast of Black Panther (Chadwick Boseman, Michael B. Jordan, and Angela Bassett), and Sam Rockwell (Iron Man 2).

Just because all of those Marvel stars are listed as presenters, though, doesn't necessarily mean that they'll all be presenting separately. They might be, of course — but what if, as THR predicted back in January, they'll be ushering segments in and out as a group? Or, better yet, in their Marvel costumes? OK, that last one is probably pretty far-fetched, but there's really no way to know for sure until the show actually starts.

It'd definitely be cool for fans to see all of their favorite superheroes on stage together at the Oscars tonight. If it doesn't end up happening, though, it's not like it'll be the end of the world or anything. And even if it was the end of the world, there'd be plenty of them around to save the day.