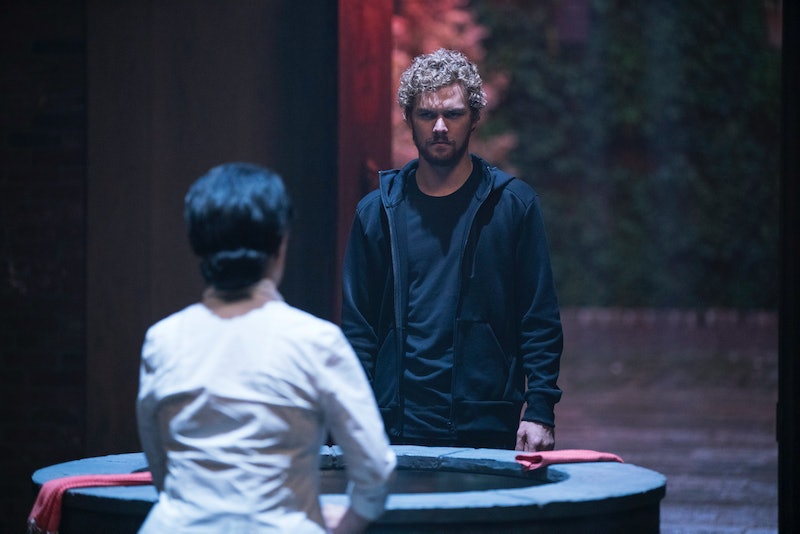 Iron Fist Season 1 introduced the conflict between the mystical city of K'un-Lun and underground organization The Hand to the Marvel Netflix Universe, but the criminal crew may not be around for Season 2, premiering Sept. 7. While the Hand may not be entirely eliminated on Iron Fist, events that happened between the show's first and second seasons do indicate that the organization is now merely a shadow of its former self.

For better or worse, it's nearly impossible to be an Iron Fist fan if you're not also a fan of the rest of Marvel's family of Netflix shows. Between Seasons 1 and 2 of Iron Fist, the story of Danny Rand continued in the crossover miniseries event The Defenders and in the second season of Luke Cage. While Danny Rand's appearance in Luke Cage offered some minor character development for the hero, fans who go into Season 2 of Iron Fist without watching The Defenders will be surprised to see that the criminal organization that Rand had sworn to defeat has already been bested. The Hand as Rand knew it seems to only be a memory in Iron Fist Season 2, but it's still possible that a new power could rise in the future.

The Hand were the lifelong enemies of the Immortal Iron Fist, but fans of the Marvel Netflix Universe were first introduced to the organization as the nemesis of Daredevil, who were collaborating with Wilson Fisk. As such, the defeat of the Hand in The Defenders is a win for Matt Murdock as much as it is a win for Danny Rand, In fact, the plot of The Defenders seemed to focus more on Murdock's connection to the organization, as the Hand's ultimate weapon, and eventual leader, was the resurrected Elektra — who came back to life as the Black Sky.

Elektra, working with fellow Hand leaders Madame Gao, Bakuto, and Murakami, tricked Rand into opening a passageway at the bottom of a hole buried beneath the Midland Circle tower so that the Hand could harvest material from dragon bones that were there to construct a resurrection elixir. The Defenders' ultimate plan to stop the Hand came to a close when they set explosives off at the base of Midland Circle, burying the remaining members of the evil organization.

While it seems that the Hand are dead and gone, one key detail may have been forgotten amongst the dragons and the Black Sky and the resurrecting —there are possibly still Hand agents in K'un-Lun. Season 1 of Iron Fist ended with Rand discovering that K'un-Lun had vanished and finding the corpses of Hand agents at the city's entryway. The implication is that the Hand managed to make their way into K'un-Lun, and that some are still there, unaware that their leadership has been killed. A new leader of the Hand could emerge should the lost city return, but until then it seems that Danny Rand and his allies are finally done with these villains.