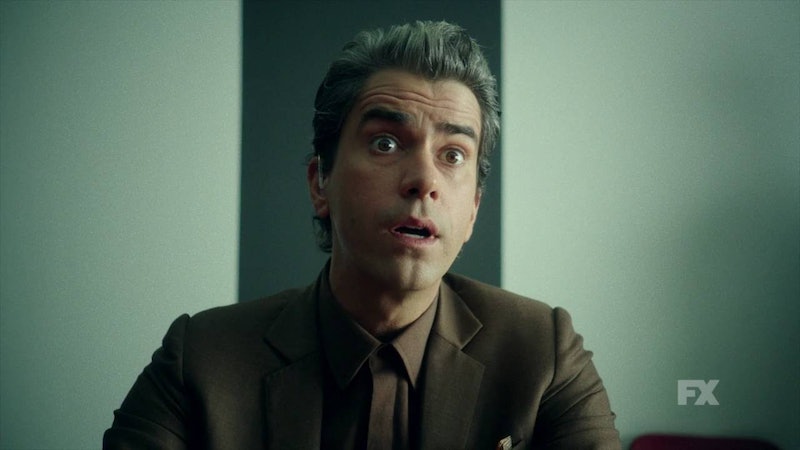 Hamish Linklater appeared briefly in the Legion pilot episode as an interrogator from Division 3, but wasn't seen since. In Wednesday, he's back, and has undergone quite the physical transformation since David's escape. Is the Interrogator on Legion an X-Men villain? He definitely looks the part.

At the end of the episode, Division 3 operatives swarmed Summerland, ready to capture David and kill just about everyone else. Half of the Interrogator's face has been badly burned, and his salt and pepper hair is swept to the side, wilder. He looks like the unmasked Phantom of the Opera, or Harvey Dent from DC comics.

Now that we know David's parasite is the Shadow King, a Marvel character, it's worth speculating whether or not other antagonists have been lifted from the comic page. There is one Marvel character called Interrogator, but he doesn't seem to share much with this guy. As far as I can tell, there aren't any characters like this. If this is a Marvel origin story, I'm not familiar. Characters with severe burns like Wade Wilson and Brock Rumlow have already been brought to life, in Deadpool and Captain America: Civil War respectively. We'll have to keep watching to see if anything, like a name, is revealed — but I think this is a new character who just happens to fit well into a comic book story, much like the other mutants that David has encountered.

Either way, I'm glad he's back. I liked Linklater's character a little more than the Eye. Whether he is a Marvel character or someone new to the X-Men universe, this proves that Division 3 won't quit. Now that they've found Summerland, the stakes are higher for David and everyone involved on Legion.