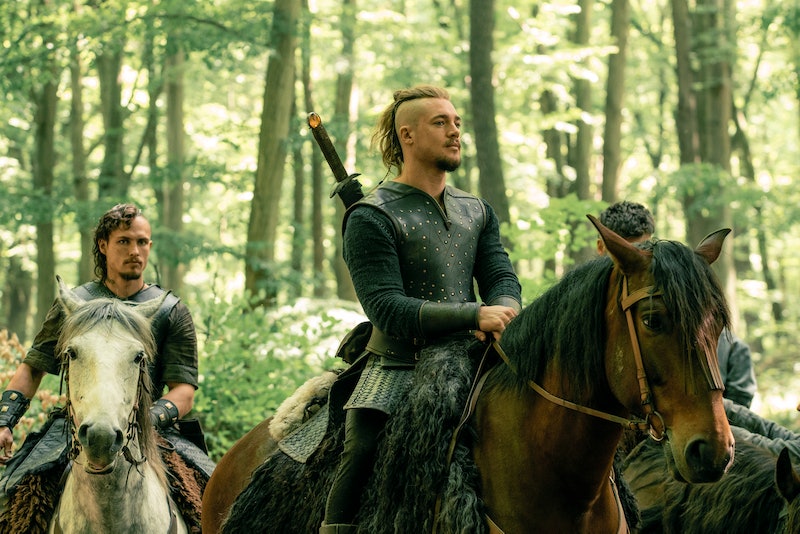 On April 26, viewers can return to the intricate world of The Last Kingdom when Season 4 premieres on Netflix. As you settle in to watch the continuing clash between the Anglo-Saxons and the Danes, you may find yourself asking, is The Last Kingdom based on a true story? While the show is an adaptation of the historical fiction novels The Saxon Stories by Bernard Cornwell, there is a grain of truth in Uhtred's journey to claim his birthright.

The series takes place during the period right before the birth of the United Kingdom, and when it comes to the reign of Alfred the Great, the show has proven to be fairly historically accurate even as it uses a mix of real figures from history as the basis for its main character, Uhtred. Season 4 will continue to mix blend history and fiction even as it moves past Alfred's death to chronicle the events in The Pagan Lord and The Empty Throne, books seven and eight in Cornwell's series.

In a 2015, Cornwell revealed in an interview with Medievalists that while he enjoys including historical elements in his novels, he considers himself a storyteller first. "I never forget that I must be primarily a storyteller, not an historian," he said. "The history will always take second place to the plot. I suspect (hope) that people read historical novels for entertainment, not education, but they can still be portals to history. A good historical novel should entice some readers to discover more, but it isn't my job to educate!"

The Netflix series seems to follow the same philosophy. Ultimately, The Last Kingdom's primary goal is to entertain and remain faithful to Cornwell's book series. Cornwell is passionate about history himself, and it was delving into his own ancestry and realizing how few people truly understand how England came to be that inspired the story.

In Oct. 2015, Cornwell told The Guardian of the series, "It's about the origins of England, how these different kingdoms come together, and it is told through the eyes of this fictitious character, bringing in ideas of revenge, identity and quest, mixing that with real history."

The show's hero, Uhtred, is fictional, but he interacts with many important figures from England's past, including the now deceased Alfred and his son Athelstan. A big part of The Last Kingdom's appeal is the way it mixes history with fiction to tell a story that is brutal, daring, and, above all, compelling. There's no need for the series to stick entirely to the facts. It can encourage viewers to delve deeper into the birth of England without turning itself into a history book.

Like all of the best historical fiction series, The Last Kingdom knows when to draw on the momentous battles and trials of the past, and when to embellish history with well-earned character moments. For history buffs, the series truly does present the best of both worlds.

This article was originally published on May 5, 2017