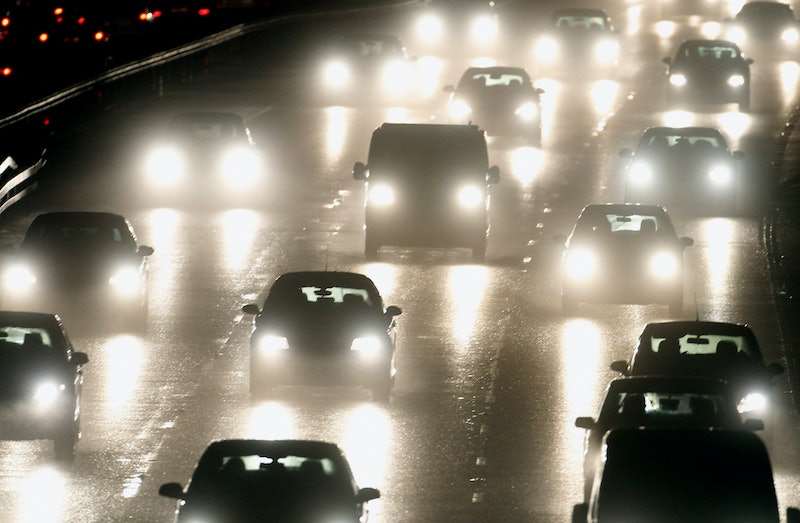 Being stuck in traffic is never fun, but most of us probably don’t assume that these kinds of hold-ups are caused by ghosts. According to one man, however, the M6 motorway in the UK is haunted — and the spirits that hang out around the road might be responsible for the rash of collisions drivers frequently experience while traveling along it. Whether you believe him probably depends on whether or not you believe in ghosts in the first place; it is, however, an interesting entry into the “haunted road” genre of alleged paranormal phenomena, so let’s take a closer look at the claim.

Originally opened in 1958, the M6 is currently the longest motorway in the UK, according to Cumbria tourist site Visit Cumbria. 370 kilometers (about 230 miles) in length, it runs from Rugby, through Birmingham, past Manchester, all the up to Carlisle, just south of the Scottish border. It’s also notorious for the number of traffic accidents that regularly occur on it — and no one really knows what’s causing them.

Mike Brooker, who describes himself on his public Facebook page as an international psychic medium, said he became interested in the M6’s issues for both general reasons and personal ones, reported Cheshire Live on Sept. 13. The reputation the M6 has for being “statistically … one of the worst ‘accident black spots’ on any motorway network in the UK,” as Brooker put it, is intriguing enough on its own; additionally, however, he told the news outlet, “I personally know people who have lost their lives and families who have been affected by accidents on this stretch of motorway.” As a result, he has begun investigating incidents pegged to the M6 — and he’s got a theory about what might be behind them: “I am leaning towards the theory that it can be connected to Saxon involvement,” said Brooker. “There are reports of a Roman burial ground and that there was an historic clash between Scottish and English armies. There are so many variables and possibilities.”

Brooker did acknowledge that “there is no clear evidence either way to support or substantiate” his theory; he did, however, note that “what is clear is that something is very wrong to cause so many accidents on what is to all intents and purposes [a] fairly straight stretch of road.” He added, “I personally believe there I something supernatural that has attached itself to this particular stretch of motorway,” citing that “science… is at a complete loss to explain this plethora of accidents [and] incidents” as his reasoning. “There is perhaps an alternate explanation,” he said. It’s not clear whether that explanation involves drivers being distracted by the alleged spirits haunting the road, or whether the spirits might actually be directly causing the accidents, but, well… maybe some things are better left unanswered.

The man isn’t wrong about the M6 being prone to collisions, crashes, and other accidents; indeed, there have been so many over the course of the motorway’s history that the Manchester Evening News even ran a feature on the phenomenon in September of 2017 titled, “Why Are There So Many Crashes On The M6?” According to this piece, the area of the M6 with the most issues is the stretch in Cheshire between junctions 16 and 20, which runs from the town of Crewe to the village of Lymm: At the time of publication, there had already been over 70 accidents on that part of the road in the eight and a half months since January — which, the paper noted, averaged out to around one crash every four days.

The Manchester Evening News piece offered up a few possible explanations. In 2015, for example heavy roadwork began between junctions 16 and 19 geared towards turning it into a “smart motorway,” which has resulted in narrow lanes that might not be equipped to deal with the amount of traffic that flows along them on a daily basis. (The work is ongoing; completion on this section of the road is expected in March 2019.) It’s also possible, as one woman observed to the Manchester Evening News, that the exit for junction 19 and an exit slip road to a service station are too close together, causing congestion at best and collisions at worst.

Is there any truth to Brooker’s claims that a Roman burial site or the slaughter of the Scottish army might be related to the M6’s issues? The answer is… complicated. Britain was under Roman rule between 43 and 410 AD; it’s also well-known that one of the greatest legacies from this period is the network of roads the Romans built across the country, many of which are still in use today. Furthermore, Scotland and England have a well-documented history of conflict, including lots of battles and wars having been fought on both sides of the border.

However, I haven’t been able to find any evidence suggesting there’s a Roman burial site on or near the junction-16-to-junction-20 stretch of the M6; the closest thing to a burial site nearby is the chambered cairn known as the Bridestones — but that’s Neolithic, not Roman. I’m also not totally sure what battle Brooker thinks may have occurred there — maybe the Battle of Preston, which occurred in 1715, but that’s much further north than the section of the M6 in question here.

Another more likely possibility is an event that occurred after the Battle of Worcester, which happened in 1651; Worcester is pretty far away from Crewe and Lymm, but it’s believed that when the Scottish army were retreating from the fight, they were set upon by the inhabitants of Sandbach. The dead resulting from this conflict were reportedly buried north of Sandbach in Piper’s Hollow, at a site that was later occupied by the now-defunct Saxon Cross Hotel — Piper’s Hollow being in the right area for this theory, according to Google Maps (it’s right off the M6 quite near Crewe).

I could have missed something, of course — I’m far from an expert here — but that’s what I’ve come up with so far, for whatever it’s worth.

Even so, though, it’s worth noting that the M6 has long had a reputation for being haunted. People have reported seeing groups of ghostly Roman soldiers traveling along the road near the M6 Toll for years, according to a piece published by Birmingham Live in 2006; others say they’ve seen a spectral truck driving the wrong way; and still others claim they’ve spotted phantom hitchhikers at the side of the road.

Also, there’s been another crash — and it happened just this morning: According to the Liverpool Echo, Cheshire police confirmed that a three-vehicle collision between junctions 17 and 18 occurred at around 10:45 a.m. local time. No injuries have been reported, but the accident is causing significant delays.

If you’re planning to be traveling along that stretch of the M6 today, you, uh… might want to find an alternate route.