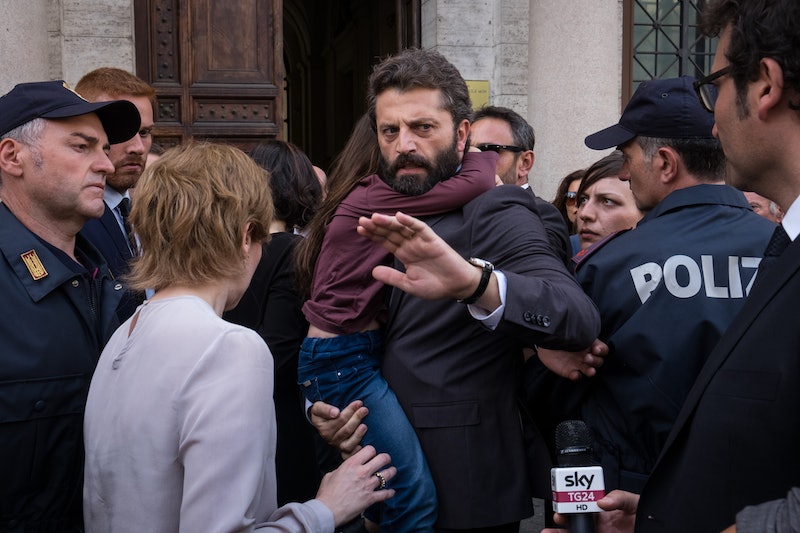 New Italian TV show The Miracle is captivating viewers across the globe and, y'all, it's not difficult to see why. The beautifully shot and mysterious-as-hell show is one of the bloodiest out there at the moment — but not in the way you might expect. This is not some grizzly-AF murder-spree type deal with violence upon violence. No no no. As wild and shocking as this show is, one can't help but wonder, is The Miracle based on a true story?

Well, I will get straight to it and say that The Miracle is not based on any specific true story, but the history of statues allegedly crying tears of blood is definitely a thing in the Catholic church.

Although the whole "weeping statue" phenomenon was first recorded centuries ago, according to Encyclopedia.com, it began to resurface in a big way in the middle of the 20th century, around the time of World War II. The site explains that there are multiple versions of the weeping statue, but not all are crying blood. It states:

"Statues and pictures of Jesus Christ, the Virgin Mary, and the saints have appeared to bleed, and they bleed in significant ways, from the hands or the brow, places where Christ was wounded during His last days on Earth, or from the eyes, as if weeping."

Although the claims are often turn out to be disproven, a statue that cries blood always garners a lot of attention. Especially from devoted followers who believe the tears are a sign from God. Some even believe that the tears have healing powers.

Speaking about the inspiration behind The Miracle, Sky Italia's chief of content, Andrea Scrosati, explained that the show aims to go beyond belief, disbelief, and everything in between. In an interview with Variety, he said:

"There have been a lot of crying Madonnas in Italy. If you go to the place, everybody will tell you it's true, but in their heart they know it's not. But what happens if it's actually true? How would politicians react to this? How would the church react to this? There is obviously money involved. And the characters that interact with this event, their lives are completely affected in ways that you would not expect."

The Miracle was written by Italian writer Niccolò Ammaniti, who is a well-known novelist in his native Italy and around the world. The show was, of course, made in Italian, but English subtitles are available. The story of The Miracle beings when a bleeding figurine is found. With the figurine's veracity being confirmed by several people, the powers that be are in a fearful state. Not only that, but it seems that the statue appears to be able to control them. Let's be real, politics could make anybody's eyes bleed but, in this instance, it's the statue that is low-key in charge. Filmed and based in the busy hive that is Rome, The Miracle is a vision of what could happen if peoples' belief systems travelled full circle.

The Miracle is available to stream now on Sky Atlantic and Now TV.