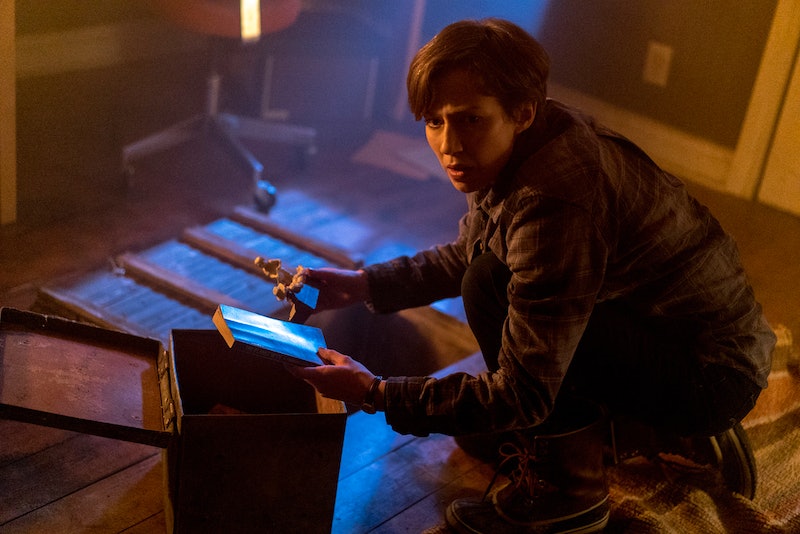 One of the weirder, seemingly superfluous details of Fargo Season 3 comes to the forefront in the spectacularly odd May 3 episode, which focuses on the backstory of Ennis Stussy, née Thaddeus Mobley, and his adventures in science-fiction writing. But is The Planet Wyh a real book? And what about the bizarre events that transpired around the book's success?

The pulpy paperback is first discovered by Gloria Burgle after her stepfather is murdered, hidden in a box under the floorboards of his house. Viewers see the book again — along with a newspaper clipping about Mobley winning an award, and a trove of other books with bizarro titles like The Plague Monkeys, Space Elephants Never Forget, and Organ Fish Of Kleus-9 — in the second episode. And in "The Law Of Non-Contradiction," Gloria travels to the City Of Angels to do some digging into her stepfather's secret past.

It turns out that, in 1975, Mobley traveled to Los Angeles to accept the prestigious Singularity Award for Best Science-Fiction Novel at the Golden Planet Awards. A producer named Howard Zimmerman quickly approached the naïve author about turning the book into a movie; but as Mobley wrote check after check and no progress seemed to be forthcoming, it eventually became clear that the whole thing was a scam to fund the lavish lifestyles of Zimmerman and his actress girlfriend. Enraged, Mobley assaulted Zimmerman and practically left him a vegetable, fled California, and changed his name to Ennis Stussy — inspired by the brand name of his hotel room toilet.

Sadly, a quick scan of your local library (or, let's be realistic, Amazon) will reveal that there's never been an author named Thaddeus Mobley nor a book called The Planet Wyh. But that doesn't mean there aren't inspirations behind the fictional novel. It's apparent that the Golden Planet Awards were based off of famous real-life sci-fi awards like the Nebulas or the Hugos — most likely the latter, given the strikingly similar shape its trophy takes (a golden rocket).

In 1975, the Hugo Award (and the Nebula, in fact) for Best Novel went to The Dispossessed by Ursula K. Le Guin. (Other nominees that year included such sci-fi legends as Philip K. Dick and Larry Niven.) There doesn't seem to be any clear link between The Planet Wyh and The Dispossessed; one tells the story of a lonely robot observing the pointlessness of existence over the course of millennia, while the other is a utopian novel about the invention of the ansible on the far-flung planets orbiting the star Tau Ceti thousands of years in the future. (The ansible is a fictional device that can instantaneously relay communications regardless of distance; dreamed up by Le Guin, it has since gone on to appear in the works of other notable authors such as Isaac Asimov and Orson Scott Card.)

The story of Planet Wyh is played out in animated vignettes throughout the episode, narrated by Gloria with voice talent provided by Fargo actors Ewan McGregor and David Thewlis, who are otherwise unseen this week. The vignettes follow Android Minsky on his aimless adventures through the passage of time; and it seems almost certain that the robotic protagonist got his name from scientist Marvin Minsky, who was a pioneering mind in the field of artificial intelligence and co-founded MIT's AI lab. (He also just passed away last year, making this a very melancholy tribute to a brilliant and formative mind.)

As for the animated sequences themselves, I think they're reminiscent of the Oscar-nominated short film World Of Tomorrow, by filmmaker Don Hertzfeldt. Both Planet Wyh and World Of Tomorrow share their sci-fi genre, simplistic hand-drawn animation style, and jarringly nihilistic themes. Android Minsky's continued childlike insistence that "I can help" are similar to the naïve and distracted mumblings of Emily Prime as her clone takes her on a tour of the future. (While Planet Wyh may have been inspired by World Of Tomorrow, but credit for the animated sequences in this episode of Fargo goes to Floyd County Productions, the same animation studio that produces Archer, also for FX.)

Although the inspirations behind this bizarre storyline may become clear upon examination, what remains frustratingly unclear is just what the heck The Planet Wyh — and this entire, hour-long detour to Hollywood — has to do with the grand scheme of things in Fargo Season 3. Is this all leading up to a connection with Season 2's puzzling UFO? Or are Planet Wyh and Thaddeus Mobley simply some of those random but lived-in details that make Fargo feel so specific and true to life?

Viewers will just have to wait and see; with seven episodes left to go in Season 3, there's still plenty of time for everything to come full circle.