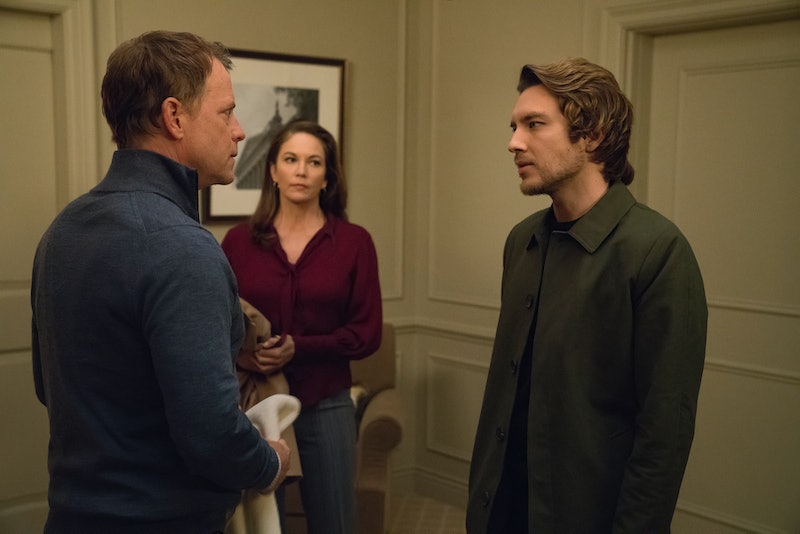 House Of Cards is down an Underwood, but two new players in the series seem to have more power than either of the Underwoods could ever dream of. House Of Cards season six introduces Annette and Bill Shepard, played by Diane Lane and Greg Kinnear, who have a seemingly infinite amount of money and resources as well as the Shepard Freedom Foundation, which they run. The Foundation is not real, much like the Shepards themselves, but the Shepard Freedom Foundation in House of Cards may be based on the organizations associated with one of America's most powerful siblings.

The sibling duo of Annette and Bill Shepard aren't happy with the fact that new President Claire Underwood won't bend to their will like her husband used to, which sets up most of the conflict for the series' final season. Although the Shepards aren't real, they share a great deal in common with the real-life sibling partnership between Charles and David Koch, two business figures who have been heavily involved in American politics, according to Time. The Koch Brothers are both heirs to Koch Industries, a conglomerate that includes companies ranging from Koch Chemical Technology Group to Koch Pipeline, and even Matador Cattle Company.

In addition to their companies, however, the Koch family also oversees a variety of charitable organizations under the banner of Koch Family Foundations. The range from the Koch Cultural Trust, which donates money to artists and art organizations, and the education-focused Charles Koch Institute. While The Shepard Freedom Foundation seems to be mirrored after the Koch Brothers' more charitable enterprises, House Of Cards explores the sinister possibility of charitable foundations being a front for political action.

Viewers first see this when the Shepard Freedom Foundation makes an appearance on the ground after a national emergency is declared in Ohio. Whether or not the state of emergency was necessary is debated among the presidential staff, but the Shepard Foundation is seen on the ground in Ohio handing out bottles of water and providing support. Those who engage with the foundation on the ground in Ohio are encouraged to download an app onto their phone, supposedly so that citizens can be involved in the foundation's humanitarian efforts. However, the show quickly reveals that the app is simply a way for the Shepards to collect data on the American public. While their foundation may have "Freedom" in the title, it's clear that the last thing the Shepards are interested in is letting the American people have freedom from corporate powers.

While Frank Underwood long wished to be the most powerful person in the world, he made the crucial mistake of misunderstanding that those that have a legacy of being powerful are not always history's most powerful figures. In the world of House Of Cards, it is people like the Shepards, hiding behind massive corporate influence, who are truly the most powerful people in Washington. Now that Claire has stepped into Frank's shoes, she is clearly making it her mission to remove herself from the influence of the Shepard's, no matter how many water bottles they hand out or how "helpful" their charitable organizations are.