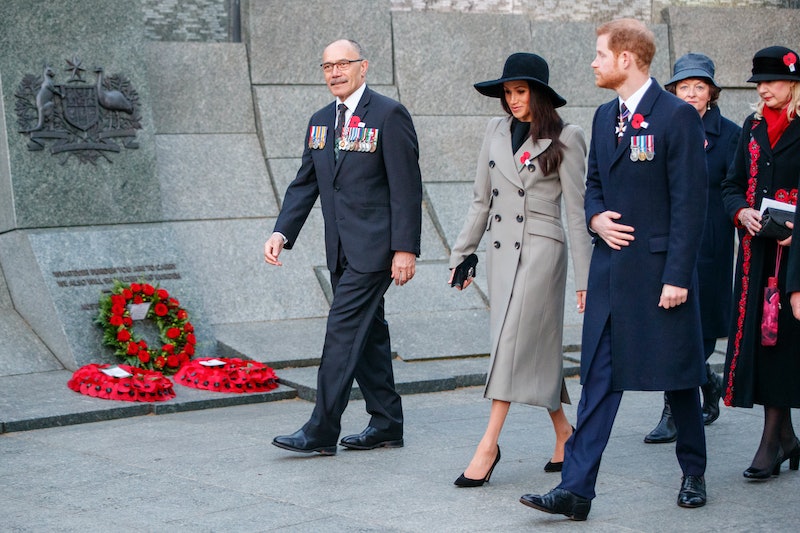 We are so close to the royal wedding you can almost smell it. If you haven't been cataloguing each aspect of Harry and Meghan's impending nuptials and/or Google Mapped the distances between various wedding venues you may still have a few questions about the events set to take place on May 19th. Like, for instance, is there a royal wedding reception.

In fact, friends, there will be not just one, but two royal wedding receptions. But before we dig into those details, let's recap. The wedding kicks off on Saturday, May 19th, at noon London time, which means if you're watching on the East Coast, it starts at 7 a.m. — and it starts at 4 a.m. on the West Coat, I'm so very sorry. The ceremony itself will be held at St. George's Chapel in Windsor Palace, which has hosted over a dozen royal weddings in the past. According to Town & Country, Edward VII married Princess Alexandra of Denmark at St. George's Chapel; Queen Elizabeth II's son Edward married Sophie Rhys-Jones at the chapel, and Prince Charles and Camilla Parker-Bowles had their marriage blessed at the chapel (they were married in a civil ceremony at the Guildhall, also at Windsor). And as recently as 2008, Queen Elizabeth II's grandson Peter Phillips married Autumn Kelly at the venue.

About 600 people are expected to attend Harry and Markle's ceremony, (though it appears Markle's father, Thomas Markle, Jr., will not be one of them.) After the ceremony, the couple will greet the public in an open-topped carriage as part of of a horse-drawn procession that'll take them all through Windsor and its surrounding neighborhood. If it rains (and it's not supposed to!) they'll take a close-topped carriage ride instead.

Then, it's onto wedding reception #1. That will be held at St. George's Hall, also located at Windsor Castle. It's the biggest room on the premises, and features gorgeous cathedral ceilings, stained glass windows, and decorative coats of armor, per a 1992 remodeling. Though Queen Elizabeth II tends to use St. George's Hall for slightly smaller state dinners, the venue, which was also where Prince Charles and Parker-Bowles's reception was held, will be able to hold the 600 invited guests.

A luncheon will be served at the reception, with Buckingham Palace reporting the food will consist of local produce delivered from farms across the United Kingdom. Dishes include fresh greens like asparagus, elderflower, and chocolate truffles.

Post luncheon, Entertainment Tonight reports that Harry and Markle will have a "first reception" in three rooms at Windsor Castle: St. George's Hall, the Waterloo Chamber, and the Grand Reception Room. There will, I am told, be cake, designed by pastry chef Claire Ptak.

And if that weren't enough wedding time, at night Prince Charles is throwing a much more intimate affair for the couple, at Frogmore House, also at Windsor Castle. Only 200 guests have been invited to the event, i.e., guests that weren't just invited for diplomatic reasons. A dinner will be served, though it's not clear exactly what—the Mirror says the event will be staffed by different caterers, and there have been rumors swirling about ice cream and food trucks. At Prince William and Kate Middleton's 2011 wedding, the evening reception did indeed feature an ice cream truck and a bacon and sausage sandwich truck, so truly anything is possible.

Though the day's menu details have not fully been released, you can expect everything to be top tier. Not just because this is a royal wedding, mind you, but because Markle's a food perfectionist, and this is her day. She's not serving you boring fish, okay?