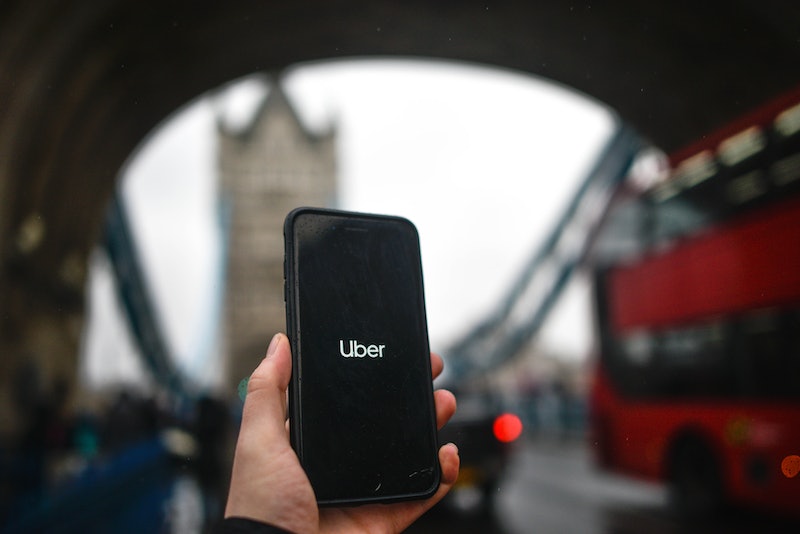 Uber has been operating in London since 2012 and seven years on, as we near the end of 2019, you'd be hard pressed to find anyone who doesn't have the app on their phone. However, the service hasn't always had the smoothest ride (pardon the pun), with previous licensing problems making its future in London unsure. And it looks like Uber is facing the same problems again. So, is Uber available in London right now despite the November 2019 ban? And what does the future hold for in terms of operating in the UK capital?

As Bustle has previously reported, Uber first found itself in trouble with the UK capital's transport authority back in 2017 when Transport for London (TfL) stated that the company could not hold a private hire operator licence due to issues with "public safety and security." TfL believed Uber's driver background checks and their handling of reported criminal offences, among other issues, were cause for concern. However, Uber appealed the decision and was eventually granted a 15-month license in June 2018. In September 2019, Uber was the granted a two-month extension on that 15-month license, which ended today (Monday Nov. 25). Now TfL have said that the app is not in a "fit and proper" state, so their licence will not be renewed.

So, what does all that mean for us Uber users? Well, the company are planning to appeal today's decision and, according to Sky News, this means that you'll still be able to use the app in London, with Uber saying they will "continue to operate as normal" at this time. So you shouldn't notice any changes to your app. Reuters reports that "the Silicon Valley-based company ... has 21 days to appeal and can continue to take rides during the process, which is likely to include court action and could drag on for months."

According to BBC News, Sadiq Khan has said, "I know this decision may be unpopular with Uber users, but their safety is the paramount concern. Regulations are there to keep Londoners safe."

TfL have noted that one of the reasons for today's decision was that they had "identified a pattern of failures by the company including several breaches that placed passengers and their safety at risk."

"TfL’s decision not to renew Uber’s licence in London is extraordinary and wrong, and we will appeal. We have fundamentally changed our business over the last two years and are setting the standard on safety. TfL found us to be a fit and proper operator just two months ago, and we continue to go above and beyond."

If the ban holds, London won't be the first UK location to have gone Uber-less, with Brighton and York both having previously banned the app from operating in their cities too.