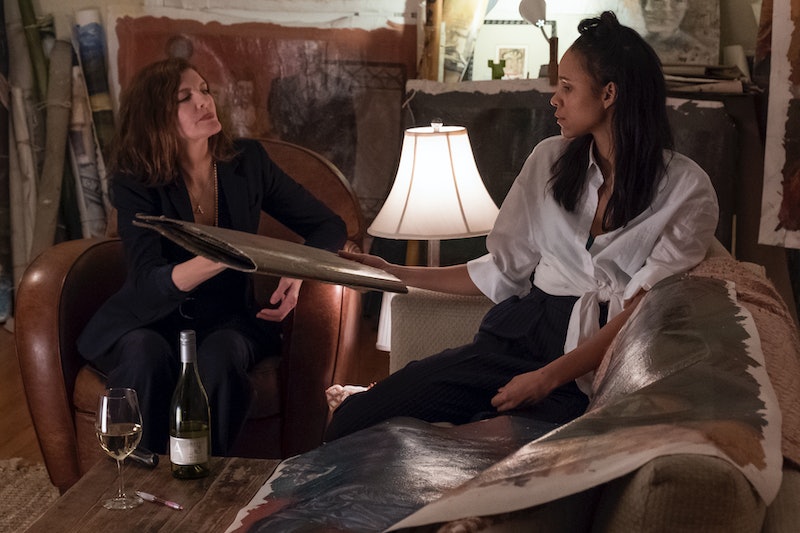 Art critic Morf Vandewalt (Jake Gyllenhaal) is used to judging work, but in upcoming horror film Velvet Buzzsaw, out on Netflix Feb. 1, the artwork's judging right back. Vanderwelt and former punk-turned-art world bigwig Rhodora Haze (Rene Russo) conspire to turn pieces by an unknown artist named Vetril Dease into the next big thing, burnishing their own reputations and lining their pockets nicely to boot. But the eerie images the artist left behind in death take on a disturbing life of their own in the art market, infecting other pieces in the collections around them with murderous intent. It's clearly a satire of art world cliquishness and greed, but is Vetril Dease in Velvet Buzzsaw based on a real artist? While Dease wasn't a real vengeful artist, there are several references to real spaces, works, and people in the film, so let's break it down. Spoilers ahead.

The "newly-discovered" artist Vanderwelt declares fascinating without really caring about his intent literally put his body and soul in his work. It's discovered that he was mixing body fluids into the base paint, his paintings become conduits for his spirit to take revenge on shallow art world folk who only care about prestige and money, not the meaning or emotion of the works they glibly trade.

Gross as it may seem to some, there's a long history of artists using body parts and fluids in their work. Andres Serrano's 1987 "Immersion (Piss Christ)", a photo of a crucifix suspended in the artist's urine, was still raising hackles in 2013 when Huffington Post reported that members of the Catholic League were protesting it. Starting in 1991 artist Marc Quinn cast his own blood into frozen busts of his face for his work "Self," and there's a strong history since the '70s of artists using menstrual blood in installations and works, as Hyperallergic details.

The works infected by Dease's vitriolic paintings in Velvet Buzzsaw include sculptural pieces by famous (and highest-selling) modern artist Piers, played by John Malkovich. A recovering alcoholic whose work has taken a nosedive since he got on the wagon, his large, shiny sculptural pieces and level of pop-culture awareness and popularity mirror sculptor Jeff Koons, whose bright, metallic balloon dogs and recent gazing balls are strikingly similar in design. Another pop-art painting that leeches its color to attack and tattoo a gallery-goer looks like one of Damien Hirst's 'Splatter' series.

Interestingly, director Dan Gilroy, who worked with Gyllenhaal and Gilroy's wife Russo previously on Nightcrawler, named a specific and well-known modern art space as the inspiration for Velvet Buzzsaw's entire concept. Speaking to Vanity Fair, Gilroy says he came up with the idea of being attacked by art when he found himself alone at upstate New York's Dia: Beacon gallery of contemporary art. "It was the Tuesday after Christmas, at about 5 o'clock in the afternoon, and no one was there... I wound up in the basement in a video installation with, like, dentist chairs and rats running around. And I just thought, ‘Man, this would be a great place for a horror movie."

That piece was Bruce Nauman's 'Mapping The Studio I (Fat Chance John Cage), a way for the artist to map leftover parts and workspaces of works completed and incomplete, and you can still see it at Dia if you're in the area. And don't worry — the odds of you getting attacked by modern art in any sense except mentally is slim to none. As for Velvet Buzzsaw, the comeuppance of art on those in it for money might make you feel better about only being able to appreciate, not afford, the works.

More like this
9 Films About Mental Health To Watch On Netflix UK
By L'Oréal Blackett and Sophie McEvoy
'Doctor Who’s New Star Is Already Huge On TikTok
By Maxine Harrison
What’s New On Netflix: A Victoria Justice Rom-Com & The Return Of David Letterman
By Arya Roshanian
Where Is Dr. Cline Now?
By Morgan Leigh Davies
Get Even More From Bustle — Sign Up For The Newsletter