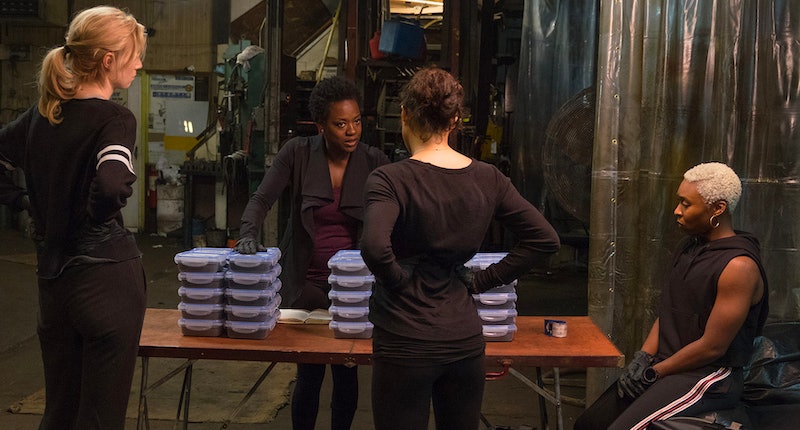 True crime is all the rage right now in the world of entertainment. Whether it's TV series, movies, podcasts, or books, people just can't seem to get enough of hearing about actual crimes in their pop culture. The abundance of the genre means that almost every crime drama may sound, on some level, like it's based in reality. Take for instance the new film Widows. It's about a group of widows who continue their deceased criminal husbands' crime spree in dramatic fashion. But is Widows based on a true story like so many other pieces of entertainment these days, or is it a work of fiction?

Widows is not based on true events, but it's not an entirely new story, either. The film has got some heavy hitters behind it, as it's directed by 12 Years a Slave helmer Steve McQueen, who co-wrote the script with Gone Girl author Gillian Flynn. With those two calling the shots, one can expect a riveting story, but the pair's inspiration is actually pretty surprising. Rather than drawing inspiration from a true crime event, one of Flynn's novels, or a classic film, McQueen and Flynn crafted Widows as a remake of a British television series of the same name that aired in the early 1980s.

Movie versions of old TV shows aren't exactly unheard of, but they often — at least in recent years — tend to gently lampoon their inspirations. Think of dramatic TV shows like Starsky & Hutch, Baywatch, and 21 Jump Street — they've all been adapted as feature-length comedies decades later. Widows, however, is going a different route. Rather than turning its source material into a farce, the new film is actually ratcheting up the drama to levels unseen in the first incarnation.

The original Widows aired as two six-episode seasons in the U.K., one in 1983 and a second in 1985. The series begins with criminal Harry Rawlins and two of his associate robbers getting shot and killed in a heist, with a presumed fourth member of their crew having betrayed them. The deceased men's three respective widows then get together and decide to take over their late husbands' crime business, enlisting the help of a fourth woman to complete their gang. Major spoilers for the miniseries and for the movie ahead! After a successful heist, the quartet escapes to Rio, where they learn the identity of the man who betrayed their husbands is actually Harry Rawlins, who did not really die. The sequel series then pits the widows against Harry; with them looking for revenge and him looking to recoup their winnings from the previous season's heist. End spoilers.

The new version makes some changes to the original story, as there are now four robbers who died — and four corresponding widows — as well as a ruthless crime boss tormenting them for the debt owed to him by their husbands. This all adds up to a bonafide crime thriller, as well as some serious Oscar bait. So although Widows isn't based on a true story, it's still going to feel familiar to some. The film is based on a formula that has been shown to work in the past, and that familiarity ought to make the movie a hit with the true crime-loving crowd.

More like this
Florence Pugh Won’t Discuss Harry Styles Sex Scenes In 'Don’t Worry Darling'
By Grace Wehniainen
Here’s Where Manti Te’o Is Now
By Arya Roshanian
Everything To Know About 'The Hunger Games' Prequel Movie
By Grace Wehniainen and Radhika Menon
What's New On Netflix: A Third '365 Days' Movie & Lili Reinhart’s New Film
By Arya Roshanian
Get Even More From Bustle — Sign Up For The Newsletter