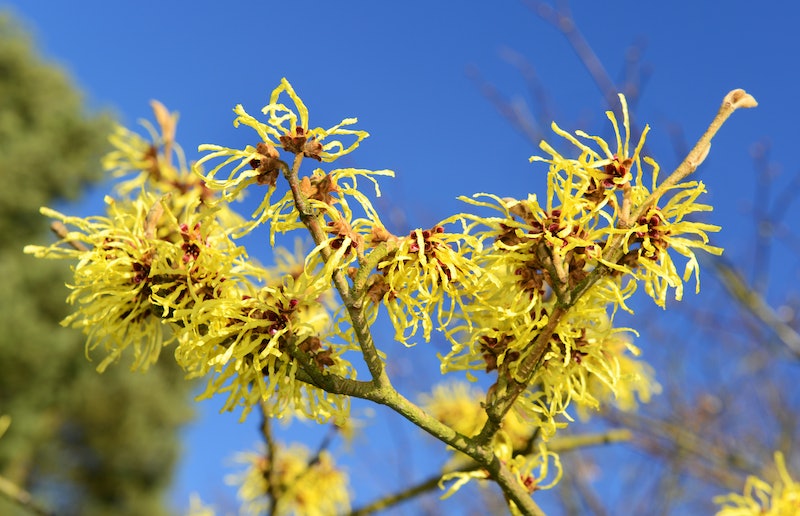 Yes modern science is super great and has a heck of a lot of benefits, but you know what is also rather wonderful? Nature. Heck yes, and humans have been turning to nature for remedies since forever. So in a way natural methods of relieving ailments and discomforts have been around longer than science. Take for example witch hazel. It has so many uses for a whole bunch of issues. So what is the best way to get that hit of goodness? Is witch hazel edible?

The plant native to America is absolutely edible, however there is not much evidence to prove that eating it has any actual positive effect. Witch hazel is in fact used mainly topically for skin complaints. It is approved not only by many herbalists but also by America's Food And Drug Administration or as you might better know it FDA.

It is often used in toner form, or as a part of a moisturiser or face wash to treat inflamed, irritated skin. According to Allure, it is thought to have a soothing effect and is believed to help remove excess oil, so I am sure if you have ever suffered from acne you have used products containing witch hazel.

Harness your inner witch and get that glow with this affordable AF and gorgeous face wash.

As the Atlantic reports, witch hazel, or hamamelis virginiana as it is known in botanical circles has long been prized by Native Americans because of its healing properties. They have used it in treatment of swellings, skin complaints, bruises, and other things like piles but let's swiftly leave those behind. Ouch.

Now however, you are far more likely to see it in your nearest pharmacy in deodorants, skin care, and so on meaning it is kind of the bomb in terms of keeping your skin nice and healthy.

The plants themselves are winter-flowering shrubs, flowering for a pretty great four to six weeks, which is a wonder in itself. The flowers are super bright fiery colours like yellow, orange, and red and give off a gorgeous scent for you to get right up your snout. Even if they do appear a little spider-like in their shape.

Despite advances in modern science and skincare, according to the Daily Mail, many people still cut witch hazel stems that are then boiled and distilled for medicinal purposes, and the liquid is known as "magic water". So you can say bye bye to nasty old skin complaints and hello to flawless. Well, maybe not straight away but you get my drift.

One really cool and slightly left-field thing witch hazel is used for is water witching. Also known as divining or dowsing, it is one ancient practice that is witchy AF. So basically it's the process of trying to find a water source using a Y-shaped branch from a witch hazel tree or metal rods. OK I know this sounds cray, but according to The Farmers Almanac, this is totally still used today. Although there is little scientific evidence to support its effectiveness.

So hey y'all, the humble witch hazel is not only edible, but will help your skin complaint, and might even help you find a water spring in times of need.