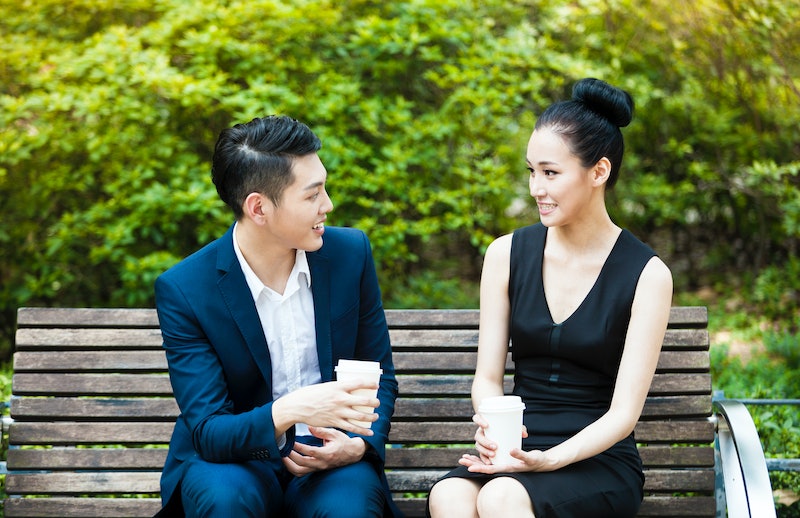 visualspace/E+/Getty Images
By Vanessa Marin
May 15, 2017

We’re always hearing that we could be having better sex, a better orgasm, or a better relationship. But how often do we hear the nitty-gritty of how we can actually better understand our deepest desires and most embarrassing questions? Bustle has enlisted Vanessa Marin, a sex therapist, to help us out with the details. No gender, sexual orientation, or question is off limits, and all questions will remain anonymous. Please send your sex and relationship inquiries to tips@bustle.com. Now, on to today’s topic: what to do if your partner feels too uncomfortable to receive.

Q: “My boyfriend and I have decided to wait to have sex, so we do foreplay stuff with each other instead. The problem is that he just can't relax enough to let me do anything to him — he always ends up taking over or giving up.

I am the first girl he has done anything with sexually. He has no problem doing stuff to me, so I don't think the issue is that he is nervous about being sexual. It’s just that when it's his turn, he tenses up and can't relax — and he acknowledges this, so it’s not just in my mind.

So what can I do to help relax him beforehand? Play calming music? Light some soothing candles? Give him a massage? Or is this just a situation where only the passage of time will make him get more comfortable with receiving?

A: Thanks for the question! Most women are surprised to come across men who have difficulty letting themselves receive, but this is actually a much more common issue than you might think — and one that may come up regarding oral sex, manual stimulation, or other kinds of sex. Receiving can be a vulnerable act for men and women alike, and so many of us struggle with it. Here are seven ways to help your partner get comfortable enough to receive.

Tell Your Partner That You Want To Please Them

When someone has a hard time receiving, there’s usually some part of them that doesn’t really believe that the other person wants to give. Your boyfriend probably rationally understands that you want to please him, but he may have a hard time fully believing it. He may have had this insecurity for most of his life, or he might be especially nervous now that you’ve had a few instances together where he couldn’t relax. He might feel like a “burden” to you, or be worried that he has a limited amount of time to “get it together” before you lose your patience with him.

The best thing you can do is keep telling your boyfriend over and over that you’re genuinely invested in making sure he has a good time, and that you actually enjoy giving. Say something like, “I want you to know that I want to please you. I enjoy taking my time and getting to know your body. It’s OK if you’re feeling nervous, but I want you to know I’m not bothered and I’m not in a rush. I just want to give you as much enjoyment and pleasure as I can.”

You can also tell him specific details about what you enjoy or why you enjoy it, like, “I feel really connected to you when I’m focusing on you” or “I love feeling your penis in my mouth.”

Ask Questions About How Things Feel

As I mentioned before, a lot of people have difficulty receiving, so your boyfriend is definitely not alone. Still, it might be helpful to ask a few gentle questions about what the experience is like for him. Is he nervous because you’re the first person he’s ever been with? Maybe he just needs some time to get used to having a sexual relationship with another person. Or does he have a hard time receiving in other areas of his life, not just the bedroom? Is he always putting other people before himself, or taking care of everyone except for himself? You don’t need to be his therapist, but a few sensitive questions might help him start opening up.

I also want to mention the possibility that a person who has issues with receiving may have been abused in the past — either sexually or physically. This is not something to assume about any person who has issues receiving (or anyone, period), but it is something to be aware of. Male sexual abuse tends to not get a lot of press, but it absolutely does happen. Some abuse survivors have a hard time allowing their bodies to be touched; if your boyfriend ever gets jumpy, skittish, or scared when you try to touch him, that could be a sign of previous trauma.

This is a sensitive topic, so I don’t recommend coming out and asking about it directly; instead, make it clear that you want to hear anything he wants to tell you about his experience.

Play Up The Fairness Factor

Another trick is to allow him to focus on you first. Let him finger you or go down on you. If he feels confident that he’s pleasured you, that may make it easier for him to relax and receive.

In your email, you asked how you might be able to help your boyfriend relax. That’s a question that only he can answer, and, unfortunately, it can be really hard to know what you want or need — especially if you’re feeling nervous or embarrassed. If you were to ask him outright what he needs, he might struggle to come up with answers.

I think you came up with some great suggestions on your own — lighting candles, playing music, or giving him a massage. Rather than asking him to come up with his own answers, suggest all of those things to him, and ask what sounds best to him. It’s often easier to pick your favorite option out of a handful than it is to come up with your own ideas. When you make a suggestion, keep emphasizing the fact that you would genuinely enjoy doing that thing to him, so he doesn’t feel like he’s being a burden to you.

Even after following all of these tips, it’s likely that your boyfriend is still going to get tense in the moment itself. Keep giving him reassurance that you’re enjoying what you’re doing, and you’re not in a rush. Say something like, “I’m having a good time. I’ll stop whenever you tell me you’re ready for me to stop, but I want you to know I’d keep going.” You might feel like a broken record, but he’ll eventually start believing you!

You asked if this is a time issue. It sounds like you and your boyfriend are relatively new to each other, so it probably is a matter of giving the two of you a little bit of time to get to know each other’s bodies. This is also a good bit of reassurance to give your boyfriend. Say something like, “Hey, we’re still getting to know each other. I’m in no rush!”

More like this
The Juiciest “Would You Rather” Questions For Couples
By Alice Broster and Rachel Mantock
9 Signs You Might Be In A One-Sided Relationship
By Lea Rose Emery and Mackenzie Sylvester
How To Spot The Signs You’re Being Love Bombed
By Lea Rose Emery and Mackenzie Sylvester
Are Gemini & Leo Compatible In A Relationship?
By Kristine Fellizar
Get Even More From Bustle — Sign Up For The Newsletter