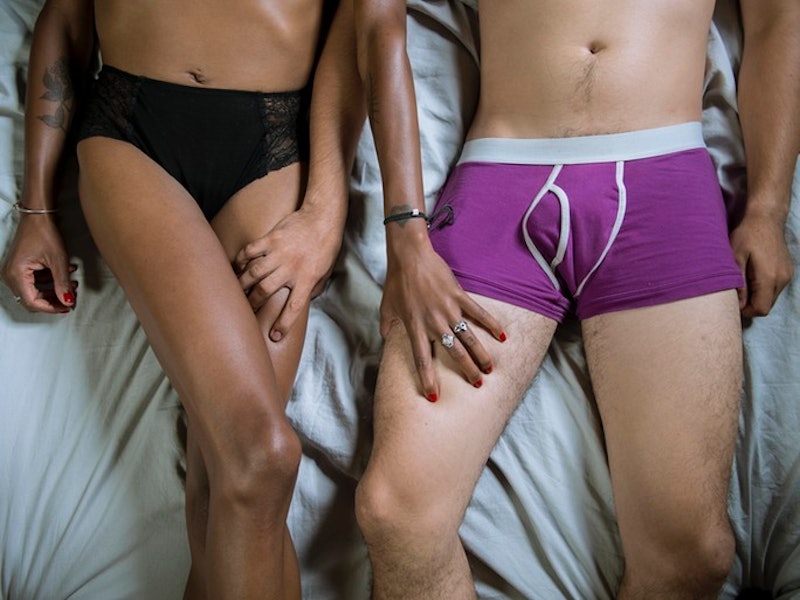 We’re always hearing that we could be having better sex, a better orgasm, or a better relationship. But how often do we hear the nitty-gritty of how we can actually better understand our deepest desires and most embarrassing questions? Bustle has enlisted Vanessa Marin, a sex therapist, to help us out with the details. No gender, sexual orientation, or question is off limits, and all questions will remain anonymous. Now, onto this week’s topic: how to make sex about more than just intercourse.

Q: “My boyfriend is a straight-forward kinda guy, especially when it comes to sex. To him, intercourse is always the main event. We spend a good amount of time on foreplay, which is great, but sometimes it frustrates me that we always seem to be working towards "normal" penetrative sex. It’s so predictable, and I worry he won’t be satisfied if we don’t have it. Don’t get me wrong, I love intercourse too, but it’s annoying to feel like I always know the way the story is going to end.

A: Thanks for the question! You’re definitely not alone. Plenty of other heterosexual women — and men — enjoy p-in-v intercourse, but don’t think of it as the be-all-end-all of sex. Most people tend to default to intercourse, since that’s what we’ve been socialized to believe is the “norm.” Heck, most people even call intercourse “sex,” as though it was the only definition of the word. It’s perfectly fine for your boyfriend to love intercourse, but there’s a whole new world that opens up if you can get yourself to take some of the emphasis off of it.

Here are 13 unbelievably sexy ways to prevent yourselves from defaulting to intercourse.

This is one of my favorite recommendations, especially for couples where one partner is a huge fan of intercourse. Focusing on each other is a fantastic way to take the emphasis off of intercourse, but without making each other feel like you’re missing out on something.

Tell your boyfriend that he’s going to be “king for a day,” and you’re going to spend the entire evening focusing on his body. Get creative, and try out as many of the suggestions below as you can. There’s something so special about being able to just receive from our partners. It’s fun to be given permission to be selfish. Of course, you get to take your turn being king/queen for a day next!

5. Use Only Your Hands

Tap into your boyfriend’s competitive side by telling him, “how about we try only using our hands on each other tonight? Do you think you could do it?” Or, get really serious, and try only using your hands for a week! Say something like, "do you think we could pull this off for an entire week? It could be fun to try..." Don’t forget to use lube to make things even more slippery and fun.

Or, make it a rule that you can only use your mouths on each other. You can get really playful by trying to avoid any hand-on-skin body contact. Of course, feel free to allow hands if you want. A blow-job, hand-job combo might just be the trick to getting your boyfriend to recognize that there are other things just as fun as intercourse.

I could write an entire article just about using sex toys to take some of the emphasis off of intercourse (and maybe I will!). Playing with toys is so much fun that you won't feel like you're "missing out" by not moving on to intercourse. We’re living in the Golden Age of sex toys, and there are so many amazing options out there. Try challenging your boyfriend to see how many times he can get you off with the Minna Life Limon vibrator. Open him up to the joys of backdoor play with the LELO Loki or the JeJoue Nuo. Try a male masturbator, like the Tenga Flip.

You can also try toys designed to heighten your senses and give you that hurts-so-good ache. These can be fantastic accompaniments to hand jobs or blow jobs, or you can really tease yourselves by limiting yourselves to only playing with a specific sensation. Try restraining your boyfriend’s arms and legs with the Sportsheets Under The Bed Restraint System while you give him a hand job or blow job (and toss on a blindfold while you’re at it). Try playing with paddles, like this number from Tantus. Or melt this Jimmyjane Afterglow candle down, and drip the remaining massage oil onto each other’s bodies.

You can bring your fantasies to life by acting out certain roles with each other, and you definitely don’t have to have intercourse to make roleplaying fun. If you're not sure where to start, play “naughty masseuse,” and have one person give an extra special massage to the other.

Absence makes the heart grow fonder, and it also makes us get much more creative. Pretend you and your boyfriend are in a long-distance relationship and can’t do your usual routines with each other. Send each other naughty text messages, Snapchats, or emails. Or set up an X-rated Skype session. You can also find toys that can be operated remotely, like the OhMiBod BlueMotion.

Harken back to your high school days by grinding against each other with your clothes on. The friction will feel amazing for you, and the tension will be great for you both. Tell your boyfriend, “remember when we used to do this?” Challenge yourselves to see who can hold out the longest before trying to rip off each other’s clothes.

You can up the intensity level of dry humping by taking all of your clothes off. Have him sit back on his heels, while you’re on your back in front of him. Spread your legs, and put one on either side of his body. Have him grab his penis and rub it on the outside of your labia. Or you can get on top in typical Cowgirl style, but have him press his penis against his body, and let you grind up against it. Use a quarter-sized bit of lube to help your bodies slide around against each others. You’ll get incredible clitoral stimulation, and the so-close-but-not-quite feeling will drive you both insane. (Of course, you’ll need to wear a condom if the two of you aren’t fluid-bonded.)

More like this
The 19 Best Tweets & Memes About Bisexual Awareness Week
By Lexi Inks
Breeding Kinks Have Been On The Rise Since Roe V. Wade Got Overturned
By Lexi Inks
Are Quality Time & Gift-Receiving Love Languages Compatible?
By Lexi Inks
How To Set Rules If You're In An Open Relationship
By Lexi Inks
Get Even More From Bustle — Sign Up For The Newsletter