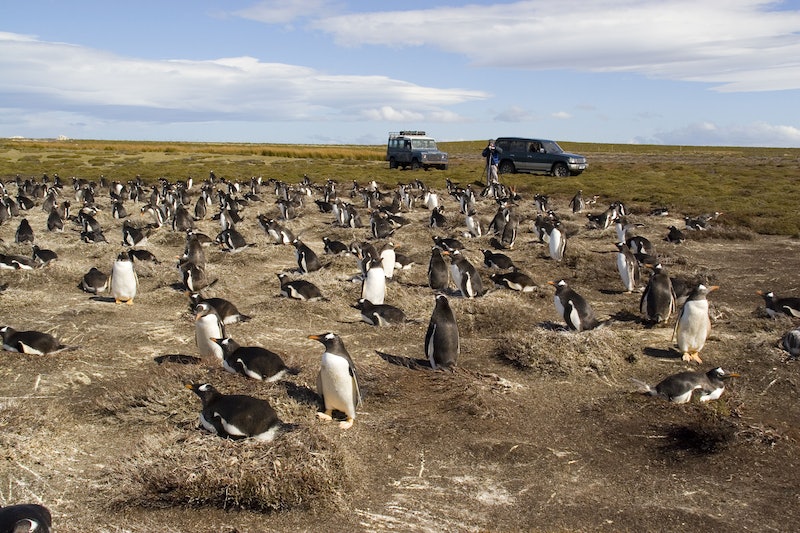 If David Attenborough's years of service have inspired you to want to join the conservationist cause, a rare opportunity has just arisen. An island filled with penguins is now up for sale with its current owners looking for someone willing to keep the island's animal-friendly spirit alive.

Pebble Island forms part of the Falklands, a remote group of islands that can be found off the coast of Argentina. According to the BBC, it is only 20 miles long and four miles wide but houses a huge amount of wildlife including five species of penguins, sea lions, 6,000 sheep, and 125 cattle. Metro reports that the waters are home to dolphins and whales while the island itself has also been registered as an Important Bird Area for the 42 species of breeding birds that live there.

So why on earth are the owners selling this small piece of paradise which features cliffs, a mini mountain range, lakes, and a pebble beach? Well, they don't actually live there, so are finding it too difficult to manage from their home in the UK.

The island was bought in 1869 for the small sum of £400, reports the BBC. It has been passed down through the same family ever since. Until now, that is.

Sam Harris, the great great grandson of the original buyer, told the BBC that Pebble Island "is an amazing place" and that it will be "difficult to say goodbye." It's his mum, Claire Harris, who has put the island up for sale.

"We want it to be developed, and to go to someone who will really care for it. The island produces a lot of wool, much of which goes to the UK, so a farming background would be helpful," Sam Harris told the BBC. "We went to an estate agency to get it valued, but they couldn't value it because we've owned it for so long. There are no recent values on it they can go on. So we're open to offers."

His mother, Claire, commented to Metro that she is hoping someone who already lives in the Falklands area will be open to buying the island, adding: "A foreign person would have to offer a substantial amount more than a Falkland Islander for us to accept it."

You may have thought that owning an island would be like being on a constant holiday, but it requires some serious hard work. If the relaxing part appeals more to you, why not visit Pebble Island for a tranquil break full of wildlife-watching, blissful views, and, most importantly, no other people? After all, it does have two self-catering cottages ready and waiting.