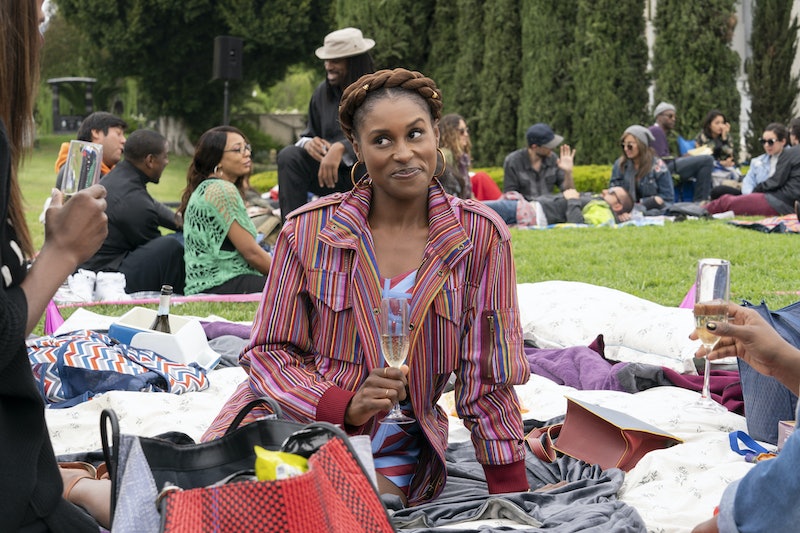 One of the things that Insecure's fans love about the show is how honest it is, whether that means watching Issa make questionable choices regarding her love life or identifying with the girls' attempts to find a place for themselves in this world — or, most infamously, with regards to sex and desire. And that frankness resulted in Insecure helping to destroy the taboo of male nudity by showcasing a whole lot of their male cast onscreen. And according to creator, writer, producer, and star Issa Rae, that's entirely by design.

Speaking at Mipcom in Cannes, as reported by Variety, Rae explained that the decision to feature male nudity is simply an extension of the show's goal of featuring "dark people having sex and being desirable," as well as a result of Insecure's primarily female writing staff. "We’re telling the show through the female lens, the female gaze, which is pretty rare," Rae said. "There’s this male gaze we’ve always been subjected to, and this is an opportunity to reverse that."

And though the show has become known for showcasing some of the more graphic aspects of being a woman in your twenties and thirties, it's that female gaze that makes the show so revolutionary. Even Game of Thrones, which shares a network with Insecure, and its frequent onscreen nudity has come under fire from critics, fans and even the cast itself for not featuring its male cast in their birthday suit anywhere near as often as the female cast. Unsurprisingly, Game of Thrones is primarily run and directed by men, which, intentional or not, results in a male gaze.

All of that honesty is simply part of Rae's quest for authenticity on Insecure. "We don’t want to tell the stories of people who aren’t in the room," Rae said at the event, specifically mentioning how the show's writer's room, made up primarily of women and women of color, has impacted the various aspects of the show. As a heterosexual black woman, Rae writes from her perspective in order to bring truth to the story, which has resulted in a more female lens through which stories are told.

But that idea of giving writers a voice to share their stories extends far beyond Rae's personal experience. "If we’re telling a queer storyline, or this story about judging someone for having this kind of experience, [it’s important] that we have voices in the room who can speak to that as well, who can add to the argument," she explained. "It’s been an amazing process."

Most importantly, Insecure has allowed Rae to tell stories that are "unapologetic," and completely different to anything that viewers have seen before. "Where television in the ‘90s and early 2000s [was] geared to capture the biggest audiences possible, which meant not addressing certain things or being tame with certain storylines, I think with the advent of cable and streaming, the desire to be ridiculously broad … isn’t really important. It’s really about authenticity," Rae explained, adding that "there’s a telling of the truth that there just hasn’t been in the past."

After all, she joked, "even white people are tired of seeing white-people shows. [They're] turning on the TV and going, ‘Aargh, I know this story already.’ It’s overdue."

Simply by being honest to her life and experience — and her desire to showcase those stories that haven't been told in such a way before Insecure — Rae has been able to break down some of Hollywood's remaining taboos. By being true to her perspective and life, Rae has helped to make Insecure a revolutionary show that challenges the norms of television.