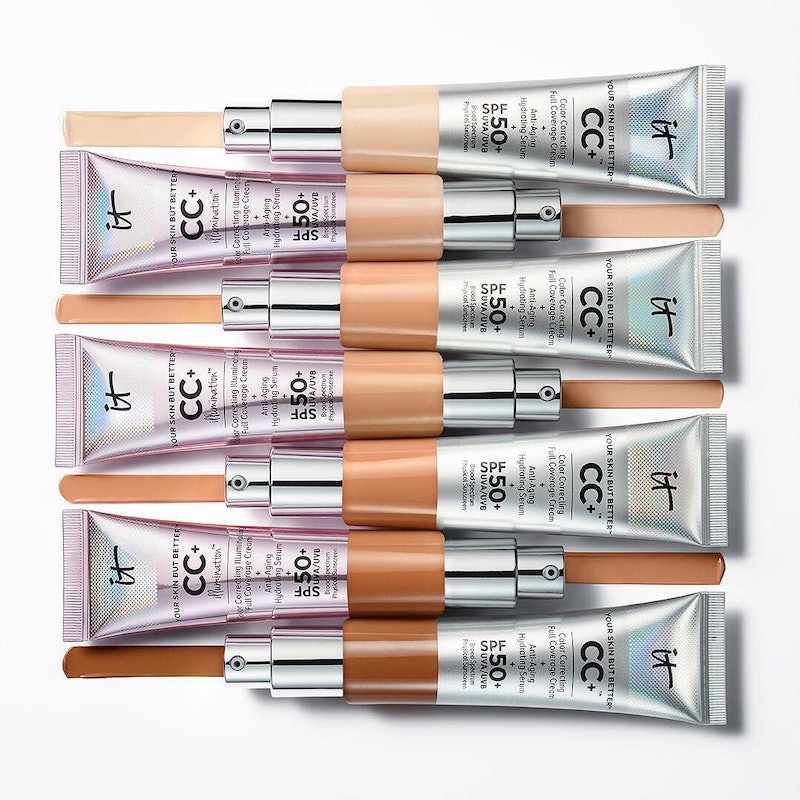 The Fenty Effect may officially be happening. Rihanna's 40 shades of foundation could be forcing brands to reevaluate their range and update for more inclusion. While there's no true way to prove a brand's motivations, IT Cosmetics' recent shade expansion of their CC cream comes on the heels of Rihanna's Fenty Beauty launch. The release also follows outcry from women of color who criticized brand founder Jamie Kern Lima for claiming inclusivity in a viral video while having a range many consider whitewashed.

Bustle has reached out to IT Cosmetics for comment on the reason for their expansion. Regardless of the reason for adding more shades in the CC cream's range, IT is indeed expanding — and it's definitely high time.

Women of color have long been calling on IT Cosmetics to create new colors as well as finesse existing shades' undertones for sometime now. Well-known and respected beauty bloggers like Jackie Aina have been leading the charge, but until now the brand had only added two dark shades in its popular Your Skin But Better line since its launch.

However, a recent post on the @itcosmetics Instagram showed signs of the change fans have been asking for: A boomerang featuring Lima appears to reveal a set of 12 shades of IT Cosmetics Your Skin But Better CC+ Cream, which would be an expansion on the brand's selection of seven shades.

The boomerang directed followers to the the brand's Instagram story, where fans found what appears to be a promotional poster boasting the new shades. Based on the image, the existing seven shades will become 12. The new shades appear to be Fair/Light, Light/Medium, Neutral Medium, Neutral Tan, and Rich Honey.

While the expansion isn't quite as large as many would like, it is a step toward more inclusivity. But much of Instagram remains unimpressed, as proved by comments on the IT Cosmetics teaser post.

Of course, it's worth noting that the only shade added to the deepest section of the brand's range is Rich Honey. The only other darker color added was a neutral undertone of their existing Tan shade.

While the brand is clearly working on crafting more CC creams, the addition of lighter undertones instead of deeper shades may not be sufficient, especially when the outcry after Lima's speech was predominantly that the darker hues specifically needed to be broadened.

Women of color have been vocal that the shade Deep is not deep enough for their skin, meaning that adding tones that aren't darker isn't exactly solving IT's inclusivity problem. In fact, in a video from 2016, Aina cited IT Cosmetics as a brand that need serious improvemenr not just because the undertone in the CC Cream didn't work for deeper skin but because the shade was impossible to correct due to it not being dark enough to begin with.

IT Cosmetics decision to expand — while laudable — shouldn't be without criticism. New undertones for existing shades with only one addition of a deep tone is something, but it's definitely not everything the brand could have done.

With Fenty Beauty launching with 40 shades, HUDA Beauty's Faux Filter dropping with 30, and Maybelline Fit Me's expansion earlier this year, beauty brands are diversifying to fit all women. But not every brand has caught on yet.

Unfortunately, small shade ranges appear to be much more the norm than inclusive lines. Despite strides being made by other brands, the cosmetic industry still has a way to go before shade inclusivity is the norm.

Only time will tell if IT Cosmetics continues crafting more shades. With highly rated skin care products and tons of existing fans, making the brand more inclusive could only be a positive for the company. Kudos to IT for adding shades, but fingers crossed more is to come.

More like this
All M.A.C. Cosmetics Lipsticks Are Buy One, Get One Free Right Now
By Audrey Noble
Rare Beauty's First Major Sale Is Here
By Olivia Rose Ferreiro
This K-Beauty “Wrinkle Bounce” Stick Is Going Viral On TikTok
By Destiny Knight
Doja Cat Shaved Her Head & Debuted Eyebrow Art
By Olivia Rose Ferreiro
Get Even More From Bustle — Sign Up For The Newsletter