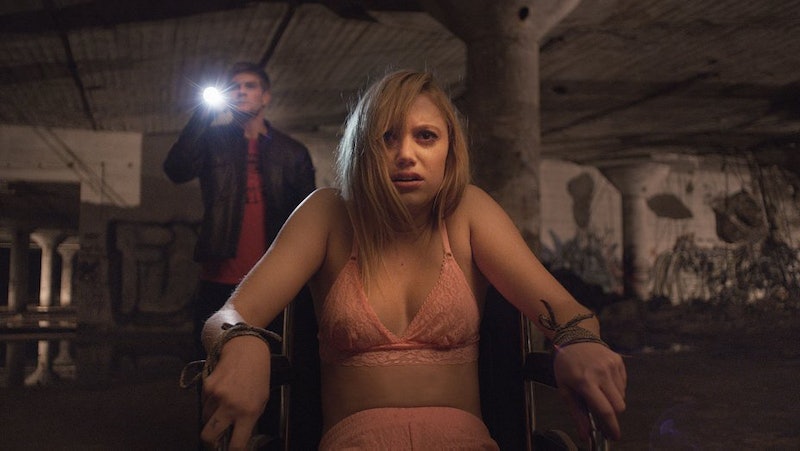 Over the past few years, a sub-genre of horror movies has emerged that's come to be called "elevated horror" by some. The term delineates between horror movies that are gore-based and those that are "idea-based" with more dramatic roots and symbolic messages, used to describe movies like Get Out, The Babadook, The Witch, and Hereditary. Not everyone loves the term; Slash Film's Jacob Knight wrote that there is no such thing as elevated horror. And many fans don't like the idea that one type of horror is more "respectable" than others. Whether or not you choose to make that particular distinction, however, there's a movie leaving Netflix in January 2019 that you have to watch before it goes. 2014's It Follows, one of the earliest examples of this controversial sub-genre, is about to leave the service on Jan. 13. and you should definitely check it out for its subversive commentary on female sexuality, victim blaming, and surviving assault while there's still time.

Warning: This article contains information about sexual violence which some may find triggering.

Directed by David Robert Mitchell, It Follows tells the story of a young woman named Jay, played by Maika Monroe, whose sexual encounter with her boyfriend Hugh leads to terrifying results. After Jay and Hugh have sex for the first time in his car, Hugh knocks Jay out with chloroform and ties her to a wheelchair to explain what she's gotten herself into: There's a creature, a demon of some kind that can take the form of any person and is now going to follow her wherever she goes. If it touches her, it will kill her. The only way to be rid of "it" is to pass it along by having sex with someone else. If she fails, and it kills her, it will come after him again. So really, she has to have sex with someone else, and then that person in turn must have sex with someone else in order for Jay to be truly free.

The image of Jay in bright pink lacy underwear, tied up against her will and held prisoner by a boyfriend doesn't exactly scream feminist, but It Follows' subversive commentary on stereotypical attitudes toward the sexual proclivities of young women is exactly what makes it such a worthy watch.

A classic trope used repeatedly in teen horror films is that if any of the characters have sex, they're bound to become the next victim. "Horror’s heroines tend to be the virginal girls next door who survive because they don’t give it up, while promiscuity leads to bloody ends so often in slashers," writes Jen Yamato in The Daily Beast. It Follows makes that idea of sex=death quite literal; the STD being passed along here is in the form of a sexually transmitted demon, rather than a disease. But rather than give into earlier horror tropes, It Follows takes an interesting twist: sex may kill you, but you also have to have sex to survive.

Throughout the rest of the film, It Follows continues to either overturn or question societal expectations of teenage sexual encounters, and particularly those of young women. That the monster often appears in the form of the characters' family members says a lot about parental notions of shame, what our parents do or don't teach us about sex, and what happens to us as a result. Additionally, the sexual encounters in It Follows are all consensual, though is anything consensual when it's done because of an invisible threat? The lack of enthusiastic or affirmative consent in the rest of the movie is quite a commentary on how young women are viewed after virginity loss.

Yet one of the most interesting things about the movie isn't its STD metaphor or slut-shaming, rather it's its commentary on sexual violence. As Carolyn Elliott writes on Medium, "It Follows isn't about panic over sexually transmitted infections, but rather the realities of surviving sexual assault. It Follows does an incredible job of dramatizing the way that traumatic sexual shame can hijack a human being’s will and desire," she says.

Over at Bloody Disgusting, Brendan Morrow writes, "It Follows is an anti-victim blaming masterpiece that gives a huge middle finger to the genre’s antiquated approach to sex. It’s about a girl who, through absolutely no fault of her own, has her body violated. The world she’s subjected to in the aftermath is complete hell, and there are no easy solutions. Her life has been forever changed, and non-victims will never truly get what that’s like. Such is life as a survivor of rape, and the fact that we live in a judgmental society that is so quick to blame the victim doesn’t make it any easier."

While on the surface, It Follows may seem like it's feeding into the slut-shaming trope, instead, the film "shames culture at large, including the audience—forcing us to follow the outcome of a society defined by the male gaze, parental neglect, sexual abuse and poverty," writes Natalie Wilson at Ms. Magazine.

There are a ton of horror movies that equate the horrors of growing up female with that of supernatural horror. But It Follows adds an additional thread of commenting on society's lack of support for victims of sexual violence — as evidenced by the enormous backlog of rape kits and the multitudinous reasons why women don't report their assaults — and the realities of surviving assault that make it worth a watch.