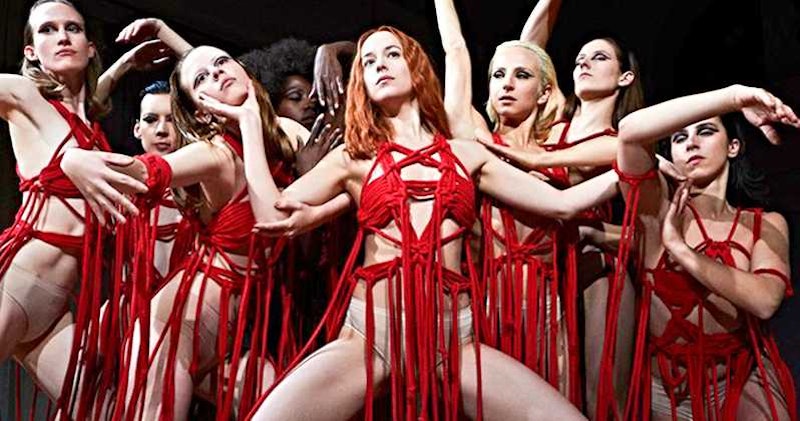 Female adolescence and the horror genre have always been a match made in heaven, or hell, if you prefer. Coming-of-age tales of girls blossoming into womanhood or simply dealing with the unknown aspects of growing up and into their own bodies make for excellent metaphors when put to use in horror movies. As such, there are plenty of streaming scary movies about female adolescence absolutely worth checking out.

This fall bring us three female-led horror films that address themes of female adolescence and emerging feminine sexuality. Lizzie (out now) stars Chloë Sevingy as the famous ax murderer, Lizzie Borden, who has a budding relationship with Kristen Stewart's maid Bridget. Suspiria, a remake of the 1977 Dario Argento horror classic, hits theaters Oct. 26 and stars Dakota Johnson as a young dancer who discovers that her dance academy may harbor evil; as in the original, it looks like the new Suspiria will also explore the "mysteries" of the female body through its use of dance sequences. Finally, Jamie Lee Curtis returns to the role of Laurie Strode in Halloween, out Oct. 19. The 1978 original introduced teen Laurie as what many now deem the original "final girl" of horror, and so it will be interesting to see how Laurie faces off against her murderous nemesis as a grown woman this time around.

These new films are simply the latest on a long list of movies that utilize female adolescence as either a catalyst for horrific events or feature more obvious plot points as metaphors for the mysterious aspects of female coming-of-age, such as:

Brian De Palma's 1976 original adaptation of Stephen King's novel is perhaps the prime example of how a young woman's developing powers are steeped in the repression and release of her sexuality and womanhood. The imagery alone (there's tons of blood) is reflective of things like periods and childbirth.

Robert Eggers' 2016 horror film is a slow burn rather than a jump and scare piece. And while it tells the creepy tale of a Puritan family dealing with a bit of a witch problem, it also boldly touches on the idea that fear of female empowerment and sexual oppression were at the root of the 17th-century witch hunts.

Teen horror movies have long-presented the idea that sex equals death, and It Follows takes that idea to the extreme. Maika Monroe stars as a young woman whose sexual encounter makes her "infected" with a kind of supernatural demon that follows her until she either passes the curse along through more sex, or it kills her. The STD connections here aren't hard to find.

This black and white, Persian-language film follows an Iranian town with a resident skateboarding female vampire who preys on disrespectful men. It's a fun creeper, but also a great takedown of the ideas of what "honorable" young women should be doing with themselves and where they should be when the lights go out.

Available to rent on Amazon or iTunes.

5. Interview With The Vampire

While the story of Louis and Lestat make up the majority of this vampire tale, the movie explores some interesting aspects of adolescence through the character of Claudia (Kirsten Dunst). As a grown woman trapped in the body of a young child, Claudia has desires, experiences, and needs that can't be met in her physical form.

This '90s cult classic might not seem as deep as some of the others, but it has a lot to say about many of the issues teen girls face simply by attending high school. That the four young witches use their powers to enact revenge against bullying, sexual assault, and peer pressure is pretty telling.

Streaming on Amazon via Starz app.

Jess Weixler stars as a young woman who discovers that her vagina is lined with razor sharp teeth, and that those teeth have a mind of their own when it comes to who or what is allowed to enter. The movie toys with the idea of virginal purity, but essentially is a revenge fantasy against would-be rapists and sexual assaulters.

"Hell is a teenage girl," says Needy (Amanda Syefried) in Diablo Cody's Jennifer's Body. Meghan Fox stars alongside Seyfried as a high schooler who becomes possessed by the Devil in a botched virgin sacrificial ceremony. Jennifer uses her newfound role as a succubus to murder teen boys this dark feminist comedy.

This 2008 Swedish film and the 2010 American remake starring Chloe Grace Moretz are both super creepy and poignantly address the unknown changes of one's body that accompany puberty and growing up. The story of a young boy and his female vampire best friend hint at that same mysterious infatuation with female development that many horror films do with the added touch of love and trust.

Streaming on Amazon and Netflix, respectively.

Other films like Natalie Portman's Black Swan and Scarlett Johansson's Under the Skin also utilize sexuality and repressed desires as tools for horror. It's clear why, as the dramatic and often traumatizing elements of adolescence make it ground zero for female-led horror movies.

More like this
Here’s Everything Coming To & Leaving Netflix In August
By Jake Viswanath
What's New On Netflix: A Third '365 Days' Movie & Lili Reinhart’s New Film
By Arya Roshanian
Twitter Is At Odds Over Taylor Swift’s Possible ‘All Too Well’ Oscar Run
By Brad Witter
Revisit 1992’s 'A League Of Their Own Cast' Photos After The New TV Series
By Grace Wehniainen
Get Even More From Bustle — Sign Up For The Newsletter