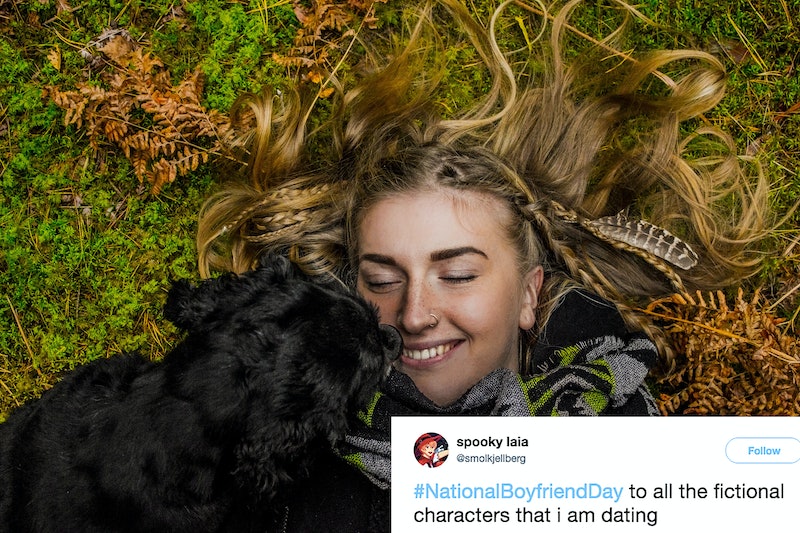 October 3 is National Boyfriend Day. If you're rolling your eyes, suddenly feeling nauseated, and wondering what this world has come to and why, you are not alone. Are relationships not being celebrated enough on Instagram and Facebook? Are men in relationships not given enough attention? Do we really need another day to make single people feel bad about themselves? Have we not been valuing relationships enough as a society?

National Girlfriends Day, also a made up holiday, is actually a day for best friends to celebrate their friendships, not to honor women who are coupled up. So there's no equivalent fake holiday for women in relationships. So really, why do we need National Boyfriend Day?

Sure, it's a meaningless holiday but its existence mirrors the way we prioritize relationships as a society. We treat single people — single women, especially — as though they're incomplete, lonely, and as though there's something wrong with them. Not only do we fail to acknowledge the psychological and physical benefits that come from being single, we tend to disregard the fact that for many people, being single is a life choice — and one they're happy about.

Our culture ignores the idea that being single may be exactly what some people need. “You are able to learn who you are as an individual, and not as a couple [when you're single]," psychologist Dr. Nikki Martinez tells Bustle. "This is an important differentiation. Who we are alone, as a unique human being on our own, is often very different than what we become, or what we allow ourselves to be in a relationship. This is your time to get a firm sense of self, and to promise yourself to never forget it, or let go of it, no matter who you are or are not with."

It's important to start acknowledging that there's not just one road to happiness. "If you're happy, then there's no reason to push yourself to be in a relationship just because society expects it," Kali Rogers, Founder of Blush Online Life Coaching, tells Bustle. "Happiness is not a one size fits all, and can only be measured by the person experiencing it. So if being single makes you happy, stay single! That's all there is to it."

I recently got into a relationship after five years of being single, and while I'm happy with my boyfriend, I can't say that my life is that much different now. But I've certainly taken note of the way people have been treating me differently since we started dating — as if, FINALLY, I've accomplished this major lifetime goal. Friends say, OMG congrats! Tell me everything. Family members seem more pleased with you, as if you've gotten your life together all of the sudden. Acquaintances who haven't seen you in a long time tell you how happy they are for you. I know they're all well-intentioned, but to act like I found this missing piece I had been searching for all my life is just false — and pretty offensive. I don't define myself by my relationship status, so why do people treat each other differently because of it?

Luckily, this holiday is fake and pretty pointless — and you'll be reminded of that when you go onto Twitter and see men praising themselves for treating their partners right. But there's also nothing like Twitter to remind you there's *always* another way to spin something that makes you want to throw up. When the #NationalBoyfriendDay hashtag started trending, it soon became the best way to announce to the world that fictional characters, food, and celebrities are the real boyfriends we should be celebrating today. Here are some of the best: