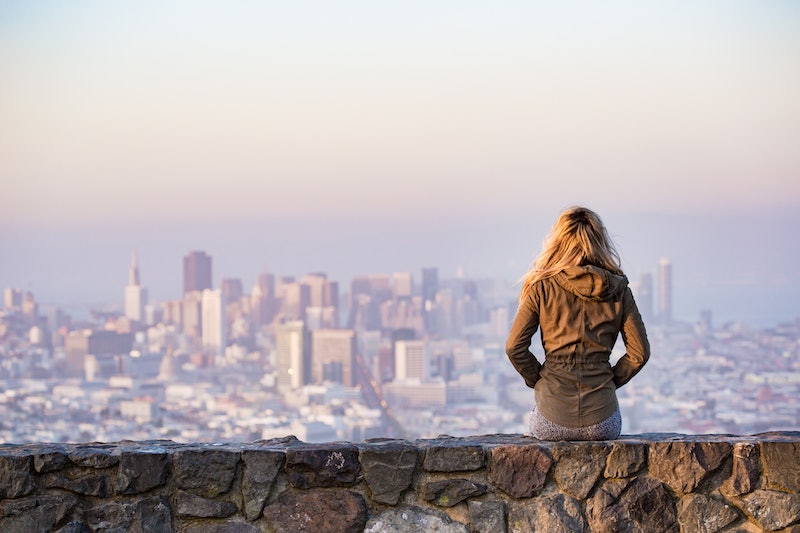 After the most fickle man I’ve ever dated dumped me last October, I decided to give up dating entirely for awhile. It’s not that I don’t love sex and relationships. On the contrary, I thoroughly enjoy good sex, and I often miss how nice being in love can feel. None of this changes the fact that I’ve historically dated people that didn’t treat me very well, though. It’s also true that I’ve got some issues to work through, and I’d rather focus on writing than dating right now. So while I know that I don’t actually need a reason to be single and not dating anyone, I happen to have several good ones.

If you too are currently single AF, then I have some good news: You truly shouldn’t feel required to justify your singleness. In addition to the fact that your relationship status is no one else's business, (unless you want it to be) the health benefits of being single happen to be extensive. Recent research suggests that single people are more likely to be physically fit, self-sufficient, financially-secure badasses than people who aren’t single. As if that’s not enough of a reason to feel good about being single, research suggests that singles are better at keeping in touch with their friends and family than marrieds.

So the next time someone says something like, “don’t you ever get lonely?” or, “but you’re still looking, right?” kindly inform them that being single is literally healthier than not being single.

OK, so let me make this abundantly clear: all bodies are good bodies! Also, size isn't always an accurate indicator of how well someone takes care of themselves. That said, multiple studies and surveys show that single people are more likely to exercise than people who aren't single.

One such study, which looked at 13,000 Americans aged 18 to 64, found that participants who had never been married exercised more than those who had been. What's perhaps even more impressive is the fact that these findings weren't dependent on age or gender, either. So basically, single people of any age and/or gender are more likely to be physically fit than people in serious relationships and marriages. Since regular exercise fights anxiety, depression, and the development of countless diseases, (like diabetes and breast cancer) it's statistically accurate to say that single people are in better shape than anyone else.

Despite what The Mindy Project, Workaholics, Bridget Jones Diary, and dozens of other narratives about single folks would have us believe, single people typically eat healthier than people who aren't single. At least, we eat healthier than people in unhealthy or toxic relationships do. It's not surprising, of course. As dating coach and sex expert Laurel House told YourTango back in 2015, "Unhealthy and unhappy relationships can lead to a variety of hurtful habits and head spaces, including comfort feasting (eating everything and packing on the pounds because you need a “friend”) and control fasting (using food avoidance as a way to control something, anything, in your life)."

Not only do the majority of single people end up with less debt than their married peers, but single women reportedly earn more than women who aren't single. As Business Insider reported last July, "single women between 28 and 30 years old earn $1,349 more per year in individual income compared to their married counterparts." Single women in their 40s out-earn their married peers, too. In fact, single women between the ages of 44 and 46 reportedly bring home $1,465 more than married women of the same age range. Since stress can literally make you sick, and financial stress is the worst, it stands to reason that fewer financial concerns leads to a happier, healthier life.

While I'm not a big fan of wage gaps, it is nice to have statistical proof that single women don't need a partner to provide for them. Clearly, single women are doing just fine for themselves financially.

As you probably already know if you've ever been single as an adult, going solo as a grown-up forces you to be independent. When you're single and grown, rent is entirely your responsibility, and learning how to comfort yourself is essential. These are things most single folks know to be true — but did you know there's actual proof that singles are better at being alone than marrieds?

In an article that hopefully surprised no one, Psychology Today reported that singles are more self-sufficient than their married peers. Singles aren't just better at being alone, though. Research suggests single people are more likely to cherish and benefit from their alone time than marrieds.

Single People Are Better At Maintaining Their Non-Romantic Relationships

As Psychology Today reported back in 2014, people who have always been single are typically more attentive toward their friends, family, and even their neighbors than married people. Additionally, the friendships of single people tend to last longer, and singles are more likely to maintain close relationships with their parents and siblings as adults. On top of all that, research shows that singles are more likely to to have provided regular care for someone who was sick or elderly than their married peers.

Since not socializing enough can lead to everything from depression to inflammation, it's really not surprising that single people who keep in touch with their loved ones are healthier than married people who (generally speaking) spend most of their time together.

Just last August, meta analysis of several studies showed that, overall, single women are happier than married women. Completely unsurprised by this news? Me too. In a society where sexism, rape culture, and government-mandated gender roles are the law of the land, it makes total sense that single women are typically happier than women who are trying to maintain egalitarian relationships in an unequal world.

According to social psychologist Bella DePaulo's recent meta-analysis of past studies on the subject, single women are doing just great. As DePaulo told Today last summer, "Research comparing people who have stayed single with those who have stayed married shows that single people have a heightened sense of self-determination and they are more likely to experience ‘a sense of continued growth and development as a person.'"

I don't know about you, but as an intentionally single lady myself, I couldn't be more comforted and inspired by all of this.