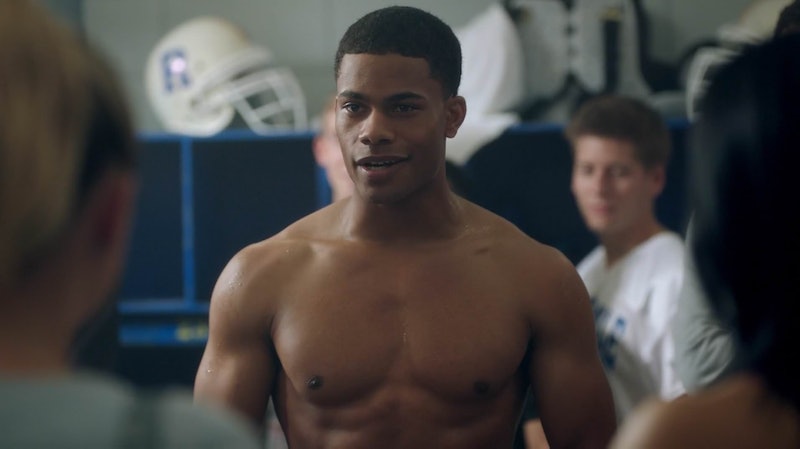 Despite the Riverdale writers' attempts make me feel otherwise, "villain" Chuck Clayton is one of my favorite characters. In fact, it's because of the writers' attempts that that I'm drawn to him. Frankly, Chuck illustrates Riverdale's diversity problem completely — he's a walking, talking embodiment of everything the show is doing wrong. Considering that he's only appeared in three episodes (only two of which actually focused on him) the number of racially insensitive boxes that Riverdale has ticked off with his arc is staggering. But I don't think it's too late for Chuck or the show. Now that Riverdale has been renewed for Season 2, the writers owe it to fans like me to finally confront the series' race problem — and if they want to succeed, they have to start with Chuck.

But before we can map out a plan for redemption, we need to address the problems with Chuck. First seen in brief glimpses and group shots, Chuck Clayton was officially introduced as Veronica Lodge's new love interest in "Body Double." After going on one date with Chuck, Veronica was then horrified to find that he was trying to publicly shame her for sleeping with him, even though she hadn't and shouldn't be shamed for it even if she had. On top of that, she's far from the first woman that he and the football team had tried to shame into silence. A furious Veronica teams up with Betty Cooper to make Chuck admit the truth. And that's when it all goes wrong.

What happens next should be a noble plot about sex positivity, but instead it quickly becomes completely unacceptable when Betty chains Chuck up in a hot tub and threatens to drown him and boil him alive if he doesn't apologize. While doing so, she calls him "boy."

The scene was intended to be a moment of feminist triumph with a side of exposition to set up Betty's very real mental issues. Instead the scene of a chained up black man being called "boy" while being shoved under water by a white woman is instantly soured by those four damaging, racially coded choices.

The chains and the "boy" line ("Good boy, Chuck," in case you've forgotten) are both things historically used in times of slavery to dehumanize black people. Then comes the choice to make Betty and Veronica take revenge by half-drowning Chuck in a hot tub. When I watched the scene, I couldn't help but be reminded of the stereotype that black people can't swim; the origin of that stereotype, of course, comes from the fact that, historically, we were barred from public swimming pools as recently as the 1960s.

On top of that, the act is perpetrated against Chuck by a white woman, and white women have historically held a position of racial power over black men. In the late 19th and early 20th century, it was extremely common to see white men "protecting" white women by lynching black men for as little as looking at white women "the wrong way." In fact, this reasoning was reportedly used to justify violence against black people as recently as the 2015 Charleston shooting, in our allegedly post-racial America. Finally, the revenge storyline is tied up with the red bow of perpetuating the Black Brute stereotype that, according to Ferris State University, paints black men "as innately savage, animalistic, destructive, and criminal — deserving punishment, maybe death... terrifying predators who target helpless victims, especially white women."

And, indeed, the other helpless victim the show chooses to focus on is another white woman: Ethel Muggs.

The next and last time we see Chuck is seven episodes after the Betty incident in "The Lost Weekend." His return could have been a redeeming moment or at least a chance to make him a more nuanced villain (a courtesy given freely to Cheryl Blossom by the Riverdale writers). Instead, Chuck returns to Riverdale High School utterly unaffected by his suspension; so much still a threat that Betty nearly attacks him in the cafeteria when she sees him sitting with Ethel. Later, Cheryl enlists Chuck's help to ruin a small birthday party that Betty is throwing for Jughead, which Chuck uses as an opportunity to expose and mock Betty for her mental issues. Naturally, the scene ends with Jughead punching Chuck in the face to defend Betty's honor.

To recap: The last time we see Chuck Clayton in Season 1, he has been attacked by a white man to protect a white girl from his predatory jokes and sexual insults. The fact that he knocks Jughead flat on his back a second later doesn't mitigate that.

Now, I'm not suggesting that the Riverdale writers were being intentionally racist in their handling of Chuck in Season 1. Some things don't immediately jump out at you as being problematic unless you are a part of the minority group being unfairly represented and can view the scene through the lens of that experience. But that's why I'm certain that it's not too late for Riverdale Season 2 to right Season 1's miserable wrongs.

While we don't know yet how many episodes Riverdale has been renewed for, even if it's another short order of 13, there's no reason the writers can't make room for Chuck (or Valerie Brown, Reggie Mantle, or Josie McCoy for that matter). Plus, Chuck has so much potential. Even if you ignore his comic book roots, what we've learned of him on the CW show could be just as compelling as the arcs of the series' main crew.

Like Veronica, Chuck is a Riverdale transplant, adjusting to being the new kid at a school where his father is also new and untested as the football team's new coach (and I'll remind that you Hermione Lodge is facing scrutiny too, in light of her husband's misdeeds). Chuck is one of six players banned from the football team in the wake of the sex log scandal, and "The Lost Weekend" makes it clear that he's eager for revenge and hasn't learned a thing — not unlike a certain Blossom. Could Chuck have these issues because his relationship with his father is as poor as Cheryl's relationship with her parents? Is he still friends with those six players who were suspended with him? What are the dynamics between them? Could Chuck and this group of unrepentant former football players act as narrative foils to Archie's more wholesome and predominantly white group?

All these questions — all this potential — are why I'm pinning my hopes on Chuck, despite his misdeeds. He's not really a villain; he's a fumbled plot point that Riverdale now has a chance to recover.