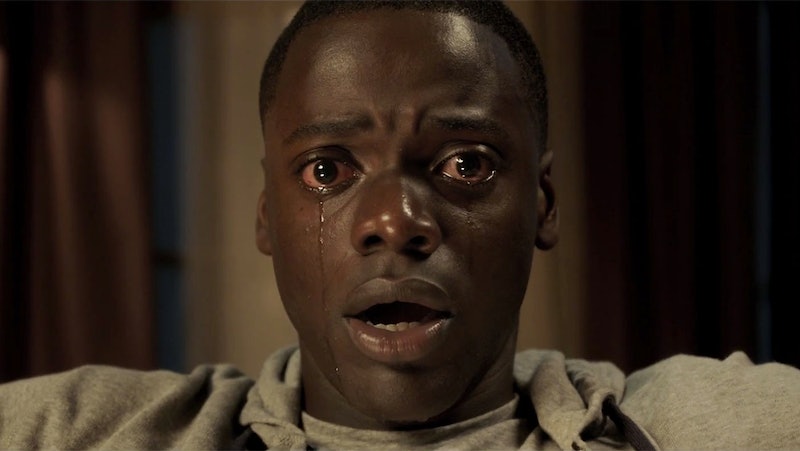 From the outset, Rose is framed as an ideal liberal girlfriend who doesn't acknowledge race. Her colorblindness is so entrenched that when Chris asks her if she's told her parents he's black, she tells him her father would've voted for Barack Obama if he ran for a third term.

Rose's liberal ethos continues when the couple hits a deer — a symbolic buck — on their way to her family's secluded home. When the police arrive, Rose defends Chris when the officer asks him for his license, although he wasn’t driving. She feigns embarrassment when her father uses black colloquialisms, like “my man,” when conversing with Chris, and outwardly groans when she learns they’re visiting during the "whitest" annual gathering at her parents’ estate.

Rose doubles down on her efforts to comfort Chris as strange things begin happening at her family’s house. For instance, she apologizes profusely when her mother, Missy Armitage (Catherine Keener), hypnotizes Chris without his consent. When he notices the strange behavior of her family's black servants, Rose assures him that they're not being abused.

It is soon revealed that Rose lured Chris to her family's home on false pretenses: The Armitage family’s business is hypnotizing Black people in order to sell their bodies to the highest white bidder. Rose's neurosurgeon father, Dean (Bradley Whitford), transplants white people's brains into Black bodies. Chris is the next Black man on the auction block. During that annual gathering Rose claimed she didn't want to attend, Chris is sold to a blind art dealer who desires his eyes as well as his artistic vision.

Rose helps her family trap Chris when he attempts to escape after he discovers that she's pulled a similar trick on several other Black men and at least one Black woman, including the two servants who've made Chris uncomfortable throughout the movie.

Rose is central to the horror. She's a culpable catalyst of racism, not an accessory or a victim.

Historically, white women have been complicit in upholding white supremacy, and Get Out is an allegory for that legacy. Recently, historian Timothy B. Tyson discovered that Mamie Till-Mobley, the white woman who accused then 14-year-old Emmett Till of whistling at her, lied. Her lie led to Till being kidnapped from his home, mutilated, fatally shot, and thrown into a river.

Till's death is central to the arch of the Civil Rights Movement, but unfortunately, it isn't an anomaly. Protecting the supposed purity and sanctity of white women led many Black boys and men to their deaths during Jim Crow, as photography professor Shawn Michelle Smith concluded in her book, Photography on the Color Line.

"The figure of a threatened or raped white woman, evoked as the innocent victim of a 'terrible crime,' was conjured in attempts to justify lynching as the 'understandable' retribution of white fathers, brothers, and lovers," Smith wrote.

The idea that Black people were inherently savage and committed to raping white women fueled lynching in the Jim Crow South, according to Dr. Lisa Lindquist-Dorr, a history professor at the University of Alabama.

"The myth insisted that black men were driven to assault white women, and that, as a deterrent, 'black beast rapists' should pay with their lives," she wrote in her book White Women, Rape, and the Power of Race in Virginia, 1900-1960.

This warped idea about black men's sexuality led to the lynching of almost 4,000 Black people between 1877 and 1950, according to the Equal Justice Initiative.

White women weren't just the justification for racial violence. Often, they, like Rose, championed white supremacy at the expense of marginalized groups. The suffragette movement is an ideal example of how white women have prioritized racial solidarity.

Many suffragettes, including Susan B. Anthony, Elizabeth Cady Stanton, and Carrie Chapman Catt, advocated for lynching and promoted voting rights as a way to strengthen the toehold of white supremacy. In fact, as the New York Times highlights, Catt notoriously said, "white supremacy will be strengthened, not weakened, by women’s suffrage."

The suffragette movement's leaders were so committed to racial purity that they prevented black suffragettes, like acclaimed journalist Ida B. Wells-Barnett, from participating in their March on Washington in 1913. Wells-Barnett wanted the ending of lynching to be central to the suffragettes, but her white counterparts, like Francis Willard, disagreed.

Anna Howard Shaw, president of the National Woman Suffrage Association, even said: "You have put the ballot in the hands of your black men, thus making them political superiors of white women. Never before in the history of the world have men made former slaves the political masters of their former mistresses!"

Rose brings this historical legacy full circle by not only positioning Chris to be auctioned off, but also by befriending a black woman for the same purpose. The movie reveals that the creepy maid is really Rose's grandmother embedded in a Black woman's body.

The preservation of whiteness is Rose's goal, as it seems to be for too many white women. This can be seen in the 53 percent of white women who voted for Donald Trump in the 2016 election. Although the then-candidate admitted to touching women's genitals without their consent, called Mexican men rapists, asked for a "total shutdown" of Muslims entering the US, and campaigned on a promise to defund Planned Parenthood and limit access to abortion, a majority of white women still voted for him.

This allegiance to someone exhibiting xenophobic, misogynistic, and racist qualities shows that a disturbing majority of white women are OK with voting against the rights of Muslim women, women who only earn minimum wage, women who need to have an abortion, refugee women, immigrant women, or women who rely on subsidized healthcare. For them, equality is about making white women equal to white men, not giving all marginalized people equal footing.

This lack of regard for intersectionality — or the post-racialism that Rose and her family display in the movie — shows up contemporarily outside of politics. Meryl Streep ignored that historical context as well when she wore a shirt that read "I'd rather be a rebel than a slave," as if enslaved people had a choice.

White liberal racism is purposefully subtle, but it's no less harmful.

"It’s not a version of racism we see depicted frequently," Williams tells Vulture. "That is the much more subversive version of the story, and thus I think is much scarier, because it’s harder to run from. It’s harder to talk yourself out of."

In choosing to make Rose a villain opposed to a savior, Peele intentionally made Get Out scarier. Racism is even scarier than horror movies, and white women have starring roles.