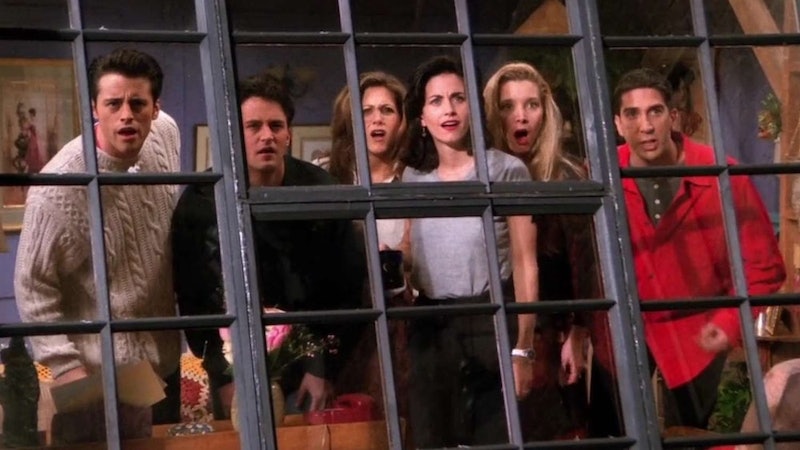 Cue Janice’s signature "oh my God!" catchphrase: iTunes' 24-hour Friends special offer just made owning the entire series a lot easier. The iTunes store is offering a 24-hour deal on Tuesday, Sept. 24 that will allow fans of the '90s sitcom to own the complete series for $29.99. Here's the catch: the offer expires at approximately 9 p.m. PST on Sept. 24, so there's very little room to drag one's feet here.

As Friends prepares to leave Netflix in 2020 for WarnerMedia's HBO Max, iTunes' special provides yet another option that will allow fans access to the hit sitcom. iTunes' special offer comes on the heels of the show's 25th anniversary on Sept. 22. The NBC series, which ran for 10 seasons between 1994 and 2004, followed a group of six friends as they navigated life, love, and careers in New York City, and cemented its core cast — Jennifer Aniston, Courteney Cox, Lisa Kudrow, Matthew Perry, Matt LeBlanc, and David Schwimmer — into the pop culture zeitgeist.

iTunes’ offer joins a series of other tributes that have been rolled out to commemorate the sitcom’s 25th anniversary. To name a few: For September, TBS unveiled a Friends marathon lineup. Meghan Trainor unveiled a cover of Friends’ theme song “I’ll Be There For You” accompanied with a light show on the Empire State Building to honor the sitcom’s legacy. In New York, a (sold-out) Friends pop-up had been set up for fans to immerse themselves in a recreation of Central Perk. And in retail, Pottery Barn and Legos unveiled Friends-themed collections to shop.

On Instagram, several cast members paid tribute to the sitcom with similar posts. On Sept. 19, Cox shared a throwback photoshoot with the cast. “Celebrating a Thursday night 25 years ago. Thank you to all of our loyal fans across the world,” she wrote on Instagram. “You’ve certainly been there for us! I love these guys! @_schwim_ @lisakudrow @mleblanc #seriouslyjen? #youtoomatthew #friends”

Elsewhere on social media, Schwimmer, Kudrow, and LeBlanc (Aniston and Perry are not on Instagram, hence Cox’s "#seriouslyjen?" and "#youtoomatthew" hashtags) shared the same photo with different Instagram captions. Schwimmer wrote, “THANK YOU to all the fans out there!! We couldn't have done it without you." LeBlanc wrote, “Seems like yesterday. Thanks to all the fans for watching." Lastly, Kudrow wrote, "We might be in different places but we are connected."

Amid the series’ anniversary, fans have been calling for a revival amid the reboot renaissance of '90s sitcoms. Friends creators Marta Kauffman and David Crane, however, have largely shut down all hope for the possibility. “We will not be doing a reunion show,” Kauffman said at the Tribeca TV Festival prior to the show’s anniversary on Sept. 13, as per Variety. “We will not be doing a reboot.”

Kauffman continued, “There are two reasons for that. One of the reasons we won’t do a reunion is because this is a show about a time in your life when your friends are your family. And when you have a family, that changes. But the other reason is it’s not going to beat what we did.”

Given that a reboot is out of the question, iTunes' special offer is looking more and more appealing, right?