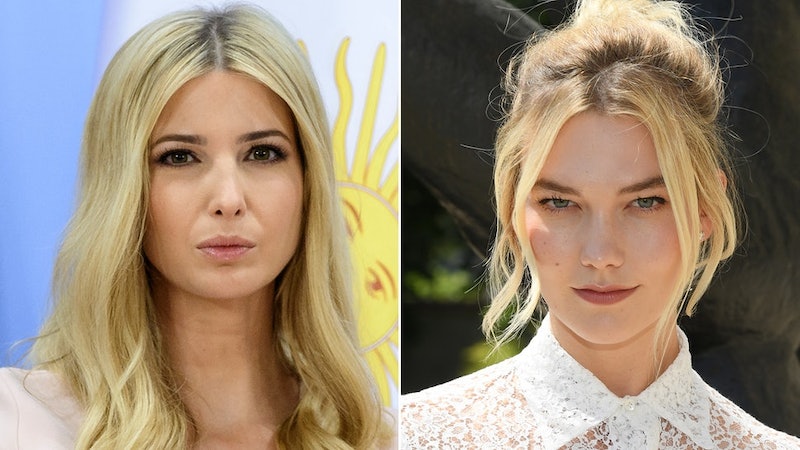 "Oh my gosh, Karlie, it's happening!" Ivanka enthused in a video she shared to both Twitter and Instagram late Thursday. The president's daughter then pans her camera over her shoulder to show the premier of season 17 of Bravo's Project Runway playing on her television. "Amazing," she said while giving a thumbs up to the camera. "Project Runway. Karlie as host."

After more than a decade strutting her stuff on the runway and gracing the pages of fashion magazines, Kloss will continue her foray into television — she's previously worked as a correspondent for Netflix's Bill Nye Saves the World series. In October, it was announced that the 26-year-old former Victoria Secret model would replace supermodel Heidi Klum as the host of Project Runway. According to Variety, both Klum and longtime fashion mentor Tim Gunn had opted to leave the reality TV series in order to develop a new fashion-related show for Amazon.

Look, let's be real. Everyone needs someone to hype them up once in a while — even supermodels with lucrative TV deals. And who better to hype you up than family.

Kloss married businessman Joshua Kushner in an intimate and surprise upstate wedding in mid October, just three months after getting engaged. According to Biography.com, the couple had been dating since 2012. The supermodel's nuptials make her and Ivanka sister-in-laws as Joshua is the younger brother of Jared Kushner, Ivanka's husband. It's unclear, however, if either Ivanka or Jared were in attendance at Kloss' wedding.

While neither woman is known for commenting in depth on her personal relationships, Kloss offered a few subtle comments about her relationship with Ivanka and Jared in a September interview with Vogue. "At the end of the day, I've had to make decisions based on my own moral compass — forget what the public says, forget social media," Kloss, who openly supported Democratic nominee Hillary Clinton in the 2016 presidential election and described herself as someone with "liberal values," told the magazine. "I've chosen to be with the man I love despite the complications. It's frustrating, to be honest, that the spotlight is always shifted away from my career toward my relationship. I don't think the same happens in conversations with men."

"Josh and I share a lot of the same liberal values that guide our lives and the things we stand for," she said later in the interview.

Kloss' new husband is also reported to have political preferences in stark contrast to his older brother. In fact, a spokesperson for the younger Kushner told Esquire in 2016 that he is "a lifelong Democrat." Jared, meanwhile, serves as a senior adviser to Trump.

Despite their purported political differences, Ivanka has appeared to be nothing but welcoming to Kloss. "So much love for you both as you begin forever together," Trump wrote in a retweet of Kloss' wedding announcement back in October.