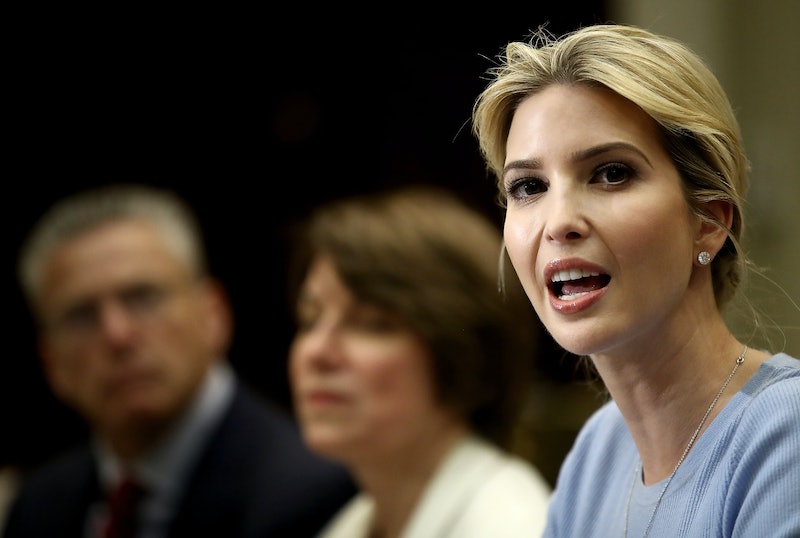 In an interview with People, Ivanka Trump claimed that her father's administration has been subject to "a level of viciousness that I was not expecting," which she was "blindsided by on a personal level." While it's true that Donald Trump's critics haven't been reluctant to criticize him in extremely harsh terms, it was pretty rich to hear the First Daughter and senior presidential advisor express shock at this. After all, Ivanka expressed no qualms about "viciousness" during her father's unrepentantly vicious campaign.

"It is hard," Ivanka said when asked if the Trump administration was having difficulty enacting its agenda in light of criticism. "There's a level of viciousness that I was not expecting — I wasn't expecting the intensity of this experience — but this isn't supposed to be easy. ... I think some of the distractions and some of the ferocity, I was a little blindsided by on a personal level."

In all fairness, politics is an extremely rough business. Any politician who occupies the highest echelons of power is going to be subject to relentless and brutal attacks on a daily basis, and plenty of those attacks will be completely beyond the pale. That's true for any family that occupies the White House, regardless of party.

And yet Ivanka is just about the last person on the planet who should be surprised at the rough-and-tumble nature of politics, given the behavior of her father and, just as pertinently, his supporters during the 2016 campaign.

On multiple occasions during the campaign, Trump told his supporters to knock the crap out of protesters and to "get them out" of rallies, for instance; he is currently being sued for these comments. How about when he lightly implied that assassinating Clinton would be a good idea, or that Ted Cruz's father was involved in the assassination of President Kennedy? And let's not forget the time he mocked Washington Post reporter Serge Kovaleski for being disabled.

The examples of viciousness among Trump's supporters, meanwhile, are endless. The Republican National Convention was full of flagrantly misogynistic anti-Clinton shirts, none of which Ivanka or Donald has condemned. Here's one, which was sold by numerous vendors throughout Cleveland, but there are many, many more examples.

There was also loads of vindictive behavior amongst Trump's surrogates. You had Gen. Mike Flynn leading a "lock her up!" chant during the convention, Rudy Giuliani saying that Trump would be "a lot better for the United States than a woman," and Pastor Mark Burns tweeting an image of Clinton in blackface.

Of course, the point isn't that Donald and Ivanka bear direct responsibility for everything their surrogates have said, as it's very common for a candidates' supporters to go a little overboard in the heat of a campaign. But it's pretty hard to believe that Ivanka was "blindsided" by how vile politics is, seeing as her father rode that vileness straight to the White House. It's almost as if the First Daughter didn't mind political viciousness when she stood to benefit from it — though of course, that's pure speculation.