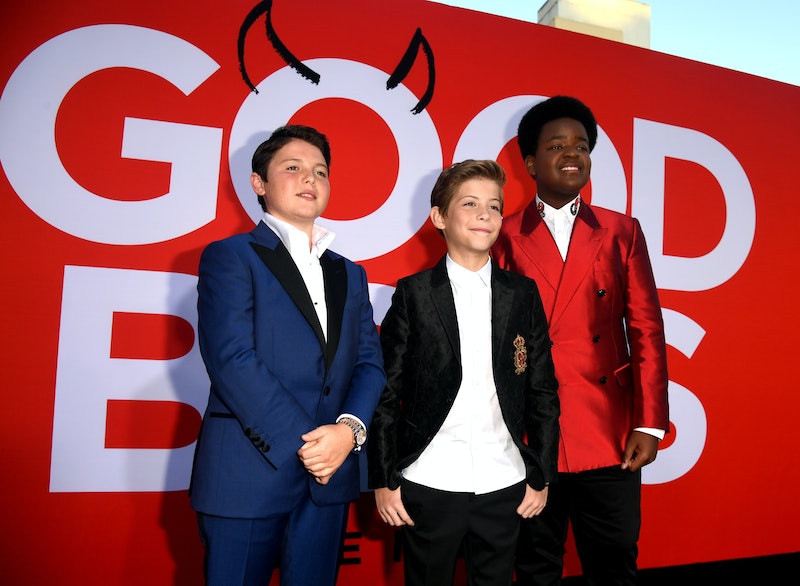 Let's cut right to the chase: Upcoming tween comedy Good Boys features a scene where Jacob Tremblay channels Keanu Reeves. Ahead of the movie's Friday, Aug. 16 release, Vulture shared an extremely delightful interview with Good Boys stars Jacob Tremblay, Keith L. Williams, and Brady Noon. And in that extremely delightful interview, Tremblay revealed that he watched The Matrix when he was getting ready to film one of the action scenes in the movie. Hey, if you are going to watch a movie before you are about to film an action scene, you definitely cannot go wrong with throwing a copy of one of the greatest action movies of, like, all time in the ol' DVD player. (OK, you are right, he probably streamed it.)

This factoid came up when Vulture asked the trio of actors to pick their favorite Good Boys scene to film. Tremblay said,

“My favorite scene would be the paintball scene because we kind of did it in one shot, almost. Everyone was dodging, running under the tables, and the pots and plates were smashing everywhere! And I remember when I was preparing for that, I watched that one scene from the first Matrix, when Neo is shooting the guns and doing the slow-motion flips. You can tell I’m harnessing Keanu Reeves in that one scene.”

Jacob Tremblay channels Neo in a paintball fight scene in the middle of what many have called the junior high version of Superbad. And not only does he harness Reeves, but we will be able to tell he is harnessing Reeves. What a gift to us all.

Speaking of Superbad and checking out classic movies (that segue was smoother than one of Neo's backbends, eh?), two of the three Good Boys boys have indeed seen the 2007 coming-of-age comedy about a pair of high school seniors who end up on a weird, hilarious, and emotional odyssey while trying to procure alcohol for a party; one only watched "some of it." When the Good Boys leads recently sat down with The A.V. Club, Williams and Noon confirmed they have indeed watched all of Superbad. “Yes, me and Brady have,” Williams said. “We watched it together the last day.” Tremblay, on the other hand, saw some of it with his parents, “but not all of it.”

When chatting with The Hollywood Reporter earlier this week, Good Boys producers (and Superbad writers) Evan Goldberg and Seth Rogen addressed the comparisons to Superbad. They noted that there while there are “a lot of the same themes and similar elements,” Good Boys' story and comedic premise are totally different. "This is based on their innocence and it's a similar emotional story, but it's a very different time in life," Goldberg told THR. "Superbad is about these two guys who are ride or die forever, and this is about these kids coming into their own."