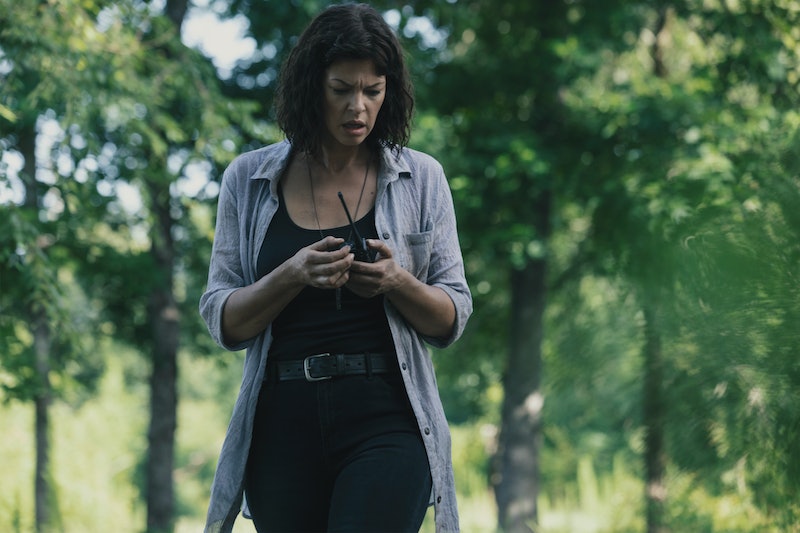 Sure, we learn that the "if you're reading this you're still here" trees were painted by Wes, the lonely traveler attacked by Logan in a previous episode. The paintings, which are unfortunately not a Drake reference due to the zombie apocalypse and all, inspire Alicia to gather the strength she needs to keep going. At the end of the episode, she paints her own tree with an inspirational message that speaks to her: "No one's gone until they're gone."

There may be other tree-painters out there. At the end of the episode, Wes smiles at a "you're still here" message that does not match the handwriting of the earlier one. To be fair, that could have been left by his deceased brother, not another mysterious graffiti-er.

The kids that Alicia picked up were also skilled at stringing together zombified body parts in a way that could be considered aesthetic. The journalist Althea, as a storyteller, is an artist too. Little by little, Alicia is assembling quite the crew of creative types.

How does Jadis, formerly known as Anne, figure into all of this? The revelation on The Walking Dead that Jadis was part of a group that rode around in helicopters and referred to people as either an "A" or a "B" before kidnapping them messed with what we thought was her personal history. It's suddenly possible that she has payed Texas a visit.

Before the apocalypse, Anne was an art teacher who took her students to the Smithsonian. When society collapses, she used supplies from the dump to express herself artistically and started referring to herself as Jadis.

At some point, after leading a bunch of trash people called the "Scavengers" in a Virginia trash pit, she joined the same group that Isabelle belongs to on Fear. There are actually some missing months in the Walking Dead between the time Rick first met the artist to the time they flew away together — the months leading up to the start of the original series' Season 9, actually, which also happen to be about when Fear Season 5 is taking place.

We know that some kind of crossover is coming, and that Jadis/Anne is likely going to factor in to it. When Anne radioed the helicopter (listen above) in her last episode of the original series, Fear The Walking Dead characters can be heard on the other end — including Morgan, Alicia, and the newly clean-shaven Dwight. They're within range, somehow, and any clues about how this is going to go down are valid.

Fear The Walking Dead is exceptionally good at paying connections off: the number of times that beer has come to the rescue alone proves it. Any random encounter could prove useful later. Even if Jadis isn't connected to these artists yet, she may be sympathetic towards them when and if they do finally meet up. The helicopter people are scary — much worse than Logan — and Alicia and Morgan's group are going to need any kind of bargaining chip they can use. Wouldn't it be nice if they all bonded together over art, instead of violence? Trust Fear The Walking Dead to serve up that kind of twist.