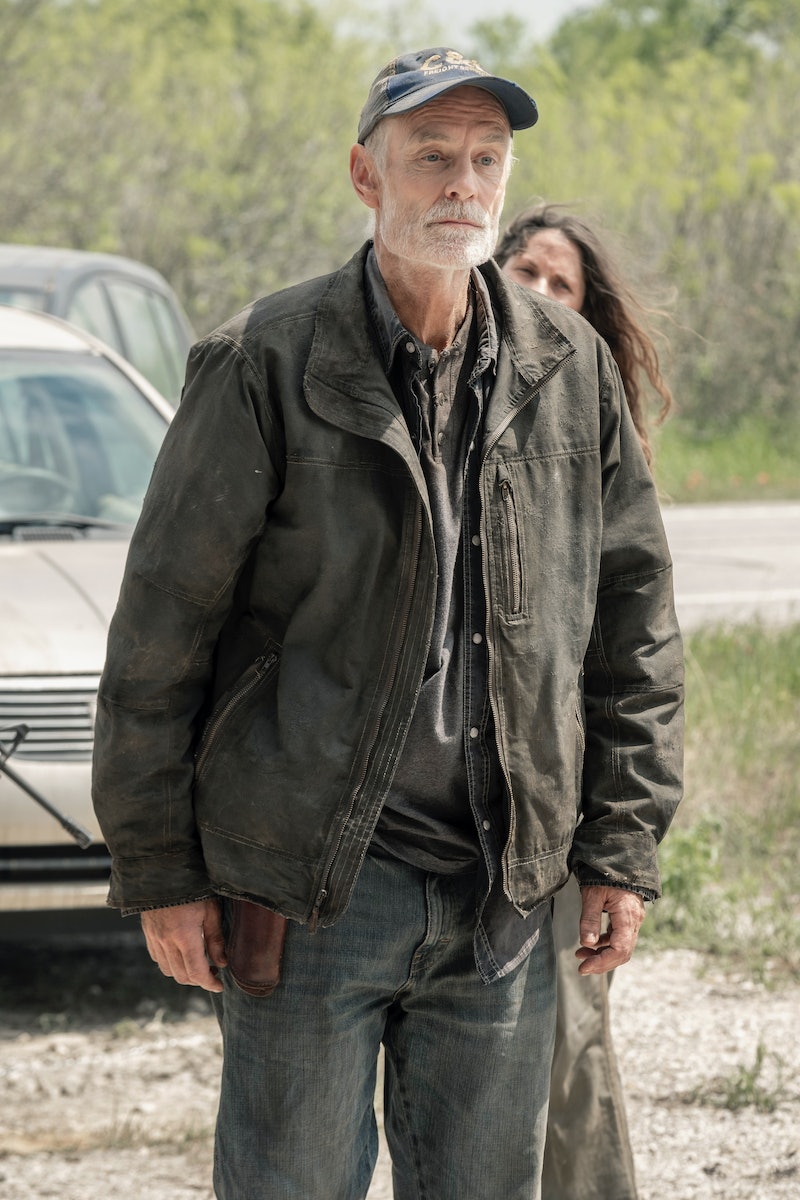 Fear The Walking Dead is getting the word out to survivors, with help from Al and her video equipment. They made a PSA to leave at way-stations with televisions and walkies that encourages folks to reach out for help — and at least one person has already seen the tape. The new guy on Fear The Walking Dead may use Channel 4 and join our heroes soon. That is, if Logan's crew hasn't already scared him off.

At the end of Sunday's episode, the lone survivor is attacked by Logan's group and left without supplies or transportation. His only option now is to call up Morgan and the others and ask for them to pick him up. Logan even encouraged him to do so, as a warning to the do-gooders that they're making more enemies than allies.

It looks like the gang didn't team up with Logan after his proposal to search for fuel together in the previous episode after all, huh? Morgan, Alicia, and Strand's group are on the road helping various people and putting together the documentary footage that makes up the PSA. They're not helping their nemesis with anything. Meanwhile Logan is back with his old people, raiding gas stations and searching for Clayton's oil field. The guy they encounter, this new character, is ignorant of the whole situation.

He kind of looks like the comic book character Heath, who disappeared from The Walking Dead a few seasons ago and has been rumored to return. Then again, he is not wearing Heath's signature glasses, or any glasses at all, so it is doubtful that Corey Hawkins' role has been recast for Fear The Walking Dead. Since the spin-off takes place at a slightly different time and place than Robert Kirkman's graphic novel series, it's not likely that he is based on any other character from the comics, either.

Newcomer Colby Hollman, who Deadline reports was announced as cast at San Diego Comic-Con, plays this mysterious survivor. “The big secret is that there have been other civilizations that have survived the apocalypse,” said executive producer Scott Gimple at SDCC, according to Deadline. “We are about to show a lot more.” That's all Gimple teased about the back half of Season 5 and what Fear has cooked up for Season 6.

"It’s been a wild ride," the actor shared on Instagram, announcing that he was joining the cast. At the very least, this means that his story is not over. There's more to learn about the PSA's first viewer. He didn't look or act like he was part of any civilization. He was at the gas station alone, with no prior knowledge of Clayton or Logan or Morgan. Before Logan arrived and messed up his ride, he was hesitant to use that radio at all. Some people just don't want to be found in the Walking Dead universe. This poor guy just wanted to ride through the apocalypse on his motorcycle, and got caught in the middle of some major Fear The Walking Dead drama. Turning on Channel 4 will lead to his rescue, but picking sides is surely to come with a price.