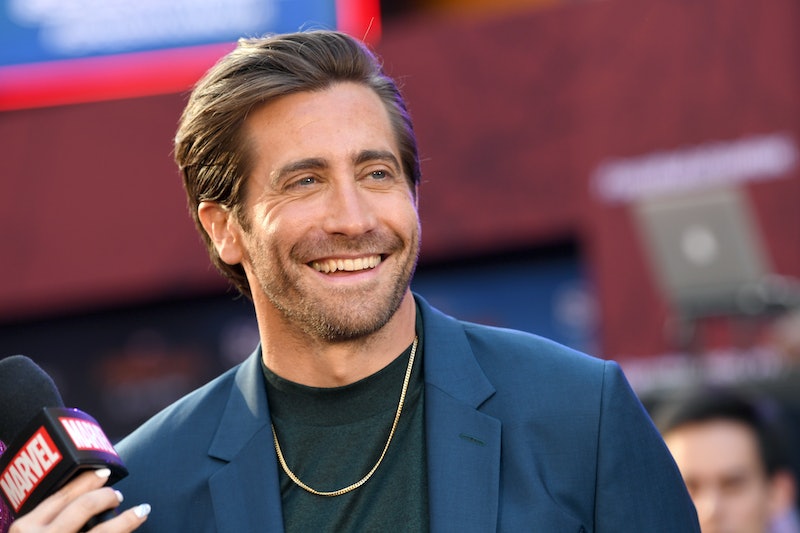 The stars of Spider-Man: Far From Home have been hitting the promotional circuit hard as of late, and their appearances have produced some pretty great moments. During a recent interview with IMDb, for example, Jake Gyllenhaal confessed his favorite superhero movie of all time — and his answer was adorably unexpected.

Gyllenhaal (who plays Quentin Beck, aka Mysterio) and Tom Holland (Peter Parker, aka Spider-Man) have been doing the bulk of the press for their new Marvel film. Together, they've got an undeniably hilarious rapport, but Gyllenhaal, in particular, has been on a notable comedic roll.

There's a good chance that his goofiness stems from exhaustion, as junkets involve constant travel, as well as early mornings and late nights. The whole thing seems like it could get pretty monotonous, too — stars are often forced to answer a lot of the same questions from a lot of different people — so, perhaps Gyllenhaal has decided to combat that by taking a lighthearted approach to interviews. Or maybe he's just a funny dude. Who knows.

Anyway, Gyllenhaal and Holland recently sat down to chat with IMDb, and were asked to reveal their favorite, respective superhero movies. Holland went with Chronicle, a dark thriller about teens that develop incredible powers after coming into contact with a mysterious substance.

And what did Gyllenhaal choose, you wonder? Something similarly eerie? Another movie within the Marvel universe? A film that he, himself, has appeared in? No, no, and no. Not even close. Never in a million years would you be able to guess what he said.

"Is the Care Bears a superhero action movie?" Gyllenhaal asked, likely referencing 1985's The Care Bears Movie. "That's one of my favorites. Of all time," he said, dead-panning into the camera.

Yes, you read that correctly. When asked about his favorite superhero movie, Gyllenhaal's first thought went to the Care Bears. Now, if you stop to think about it, technically, they do all wield special powers. When they harness the "Care Bear Stare," their "belly badges" produce a ray of light that can inflict harm on their enemies. Their enemies typically weren't as devious as the villains you'd encounter in, say, the Marvel universe, but they still had enemies nonetheless.

Touché, Jake Gyllenhaal. It seems like your response wasn't all that bonkers after all. OK, it was a little bonkers, but bonkers in a good way. Not only was his answer totally original, but it also ended up being totally legit. What a revelation.

Holland appeared relatively unfazed by Gyllenhaal's choice, which definitely added to the overall amusement of the whole thing. He barely missed a beat after his costar responded, and proceeded to suggest that Iron Man was another one of the all-time greatest superhero films. Gyllenhaal then nodded in agreement, after which Holland explained — in all seriousness — why he picked the film as a favorite.

Spider-Man: Far From Home hit theaters on July 2, but — fair warning — Gyllenhaal's character in the film is considerably darker than how the actor appears in real life. There's plenty of Jake the Jokester content out there, though, so if you'd prefer to see more of that side of him instead, then go ahead and get to Googling.