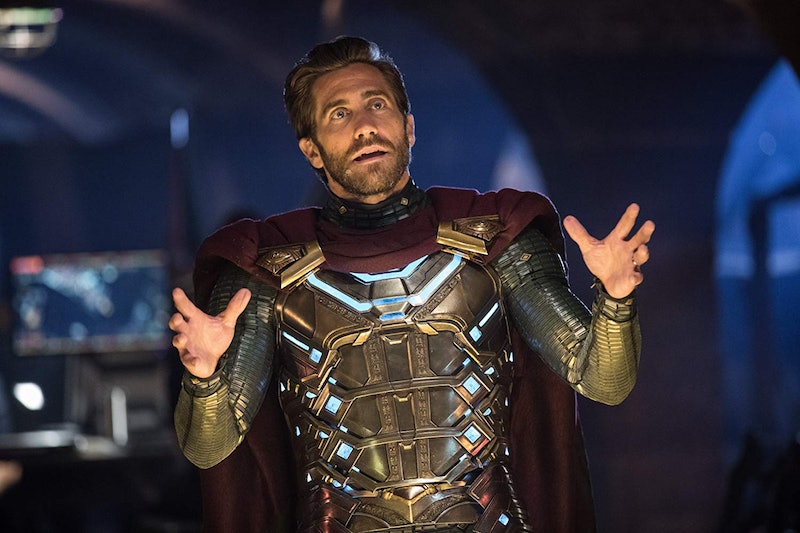 Major Far From Home spoilers ahead. In Spider-Man: Far From Home, Jake Gyllenhaal plays Quentin Beck, also known as Mysterio. While he originally claims to be a hero from another universe, he's really a former Stark Industries employee with a vendetta against Tony Stark (Robert Downey Jr.) and his memory. At the end of the film, it certainly appears as though Beck dies, and that his stint in the MCU was short-lived. But this doesn't necessarily mean Jake Gyllenhaal won't be in any more Spider-Man movies.

With clever tech tricks, hundreds of drones, and an outstanding performance, Mysterio manages to fool Peter (Tom Holland) and the world. So who's to say that he couldn't have used those things to fake his death? Although, this possibility is slim, since E.D.I.T.H., the new Stark A.I. assigned to Spider-Man, confirms the death of the Far From Home villain. But as Games Radar points out, if Beck had enough time to record false video "evidence" of Spider-Man's supposed destructive intentions that also reveals the hero's identity, he might have had enough time to figure out how to save his own life using Stark tech.

And let's not forget that the whole time, Beck was also in contact with William (Peter Billingsley) — his right-hand man and fellow bitter former Stark employee. William is the one who downloads the damning footage that Mysterio recorded while in combat with Spider-Man and presumably got it to J. Jonah Jameson (J.K. Simmons). William could have also helped find the villain a way to escape his fate.

But why would Marvel even keep Mysterio alive? Well, the answer's in the Spider-Man: Homecoming post-credits scene, where Vulture (Michael Keaton) speaks with fellow inmate Mac Gargan (Mac Gargan), a man also imprison thanks to Spider-Man. In the graphic novels, Gargan becomes Scorpion after being experimented on by Dr. Farley Stillwell. (He also eventually becomes Venom when he gets approached by the recently freed Venom Symbiote.) The two prisoners also form two of the Sinister Six — a gang of super villains out to get Spider-Man — and may be the main antagonists of the rumored third MCU Spider-Man movie. The original six also include Electro, Kraven the Hunter, Sandman, and Mysterio.

Far From Home director Jon Watts, however, told ComicBookMovie.com that the Sinister Six wasn't really part of the plan. "We never talked about that for this film. It's just a question of what is the best idea for the story we are telling. Hopefully, the best idea always wins but what's exciting about working with Marvel is that you feel like every idea is always on the table," he said.

So it looks like a Sinister Six plot line is still a possibility, and Mysterio might not be dead just yet. After all, if the MCU multiverse is a thing, then he might be alive in some other timeline. And even if his character is actually done for, maybe we get to see Jake Gyllenhaal in flashbacks that show how Mysterio managed to pull off his last trick on Spider-Man. Gyllenhaal hasn't spoken about being involved in any future MCU films, but that doesn't mean it isn't in the works. His Mysterio is a compelling villain who audiences may not want to leave in the past.