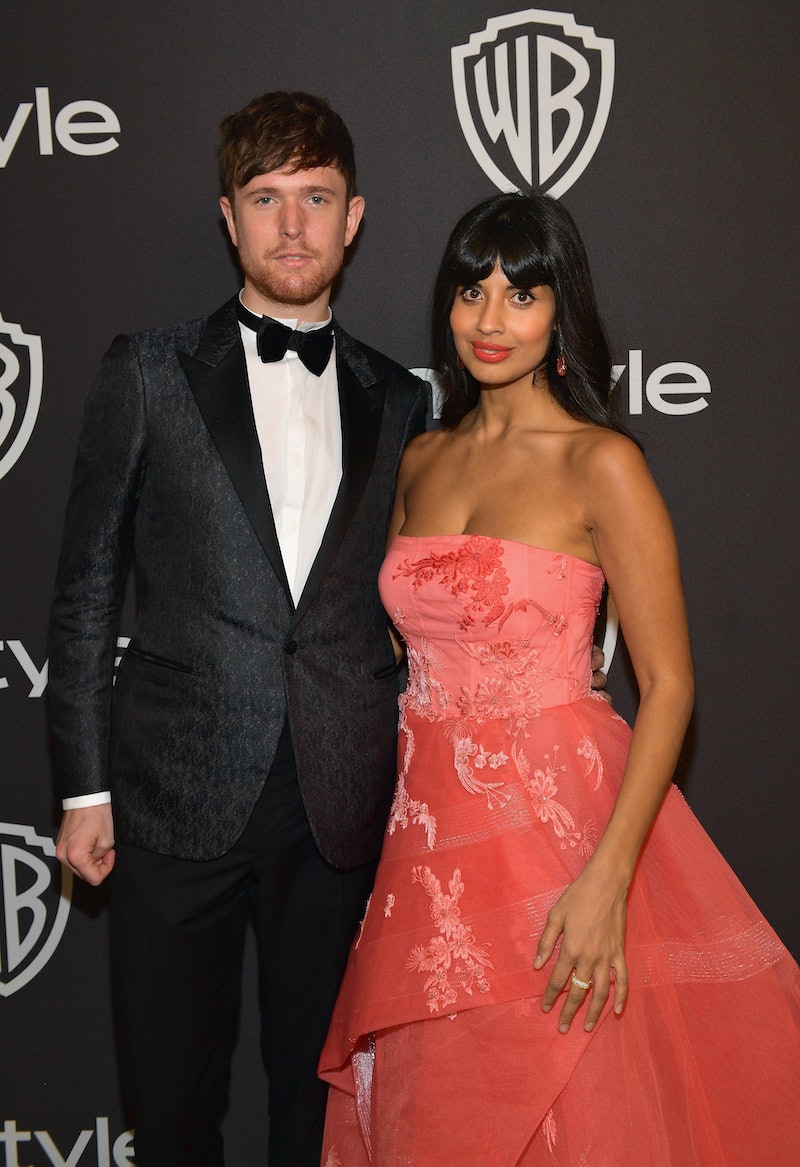 They're not notoriously private, but it doesn't seem like they're interested in peddling their own reality TV show either. They're basically the definition of a low-key celebrity couple. Even so, Jameela Jamil and James Blake's relationship timeline proves that they're committed to each other in a major way.

According to an interview Blake did with The Guardian earlier this year, he and Jamil first started dating back in 2015. They clearly had something special going on from the start, because Blake has confessed on more than one occasion that his most recent album, Assume Form, is directly reflective of the beginnings of their relationship — in a good way, just to clarify. A really good way.

When Blake and Jamil initially crossed paths, he had already garnered a ton of critical acclaim on both sides of the pond. Jamil was a well-known TV presenter in the U.K. at the time, but it wouldn't be long before audiences in the U.S. fell in love with her too.

They're pretty much an entertainment power couple these days — he's award-winning singer and producer, she's one of the breakout stars of The Good Place and super vocal about body positivity— but they certainly don't act like they think they're a big deal. Their respective social media pages pay tribute to one another like any "normal" pair would, which is to say that their posts are super sweet and supportive in a down-to-earth way.

Want proof? There's plenty of it. Just take a look at Blake and Jamil's relationship timeline below.

So, it's worth noting that Blake didn't really start using Instagram until late 2017. He made his first appearance on Jamil's Instagram page long before that, though, in a photo she shared back in February 2015. "Birthday photobooth fun in LA," she captioned the sweet pic, which showed her and Blake looking all kinds of couple-y.

Over the next couple of years, Blake continued to sporadically pop up on Jamil's Instagram page. The pics she posted were pretty low-key, and mostly just showed the back of Blake's head. She didn't really call him out by name in the captions, either, which seemingly suggested that they weren't really looking to make headlines.

While eagle-eyed fans may have picked up on the fact that Jamil and Blake had started dating earlier in the year, Jamil made it officially official on Dec. 31, 2015. "A year spent with my favourite person in the world," she captioned a black-and-white photo of her and Blake hiding their faces with their hands. "Happy New Year everyone. I can't wish it to you later because I will have eaten myself to actual death by about 8pm. Peace out. See you on the other side."

There are undoubtedly plenty of reasons Jamil loves Blake, but her post from December 2017 was a pretty shining example. The actor shared a photo of them looking out a hotel window onto Las Vegas, and captioned the moody shot, "He’s in another country but he sent me a surprise car to pick me up from the airport because he knew I would be tired and cold," Jamil wrote. "Disgusting. He is the best.💪🏽 I’ll 🤮 for you. ❤️"

August 2018: Jamil Shows Love For Blake At The VMAs

In August 2018, Jamil accompanied Blake to the MTV Video Music Awards. The singer joined rapper Travis Scott on stage for his performance of "Stop Trying To Be God" (Blake was featured on the track), and Jamil shared a post-show pic of them together the next day. "Last night at the VMAs," she captioned the shot. "He was 👌🏽. He generally is 👌🏽. I like him. 👍🏽"

Blake released his fourth album, Assume Form, in January 2019. After it was released, the singer opened up on Twitter about his biggest inspiration: Jamil. "To @jameelajamil," he wrote. "I love you and you are the reason this album exists, but now everyone else has it, so I’ll see you at home in 30 mins and we can talk sh*t about everyone," he added in reference to his song, "Power On."

In February 2019, Blake, Kendrick Lamar, Jay Rock, and Future won a Grammy in the Best Rap Performance category for their collaboration, "King's Dead." Blake and company performed the song during the show, after which Jamil shared a photo of the moment before he took the stage. "Walking under the stage before he performed at the Grammys, I look more nervous than him!" she wrote in the caption.

May 2019: They Celebrate Their Fourth Anniversary

Based on some of Jamil's previous Instagrams, it seems like she and Blake first started dating sometime in January 2015. However, in May 2019, the actor celebrated their four-year anniversary by sharing two photos on Instagram. It may be unclear exactly when they started dating, but that doesn't matter too much — their relationship is clearly deeper than a date on a calendar.

She wrote, "4 years deep with this hilarious man. I used to hate the top picture so much because of my 'double' chin, and now I realize I was such a dick for that," she said about the before and after photos. "I’m so happy in that picture and I’m so glad that wonderful day is documented. And I love my chins for being such faithful friends to my biggest laughs. My inner bully is such an arsehole and every day is an exercise to murder it."

Blake escorted Jamil down the red carpet at the 2019 MTV Movie & TV awards in June 2019. While Jamil's show, The Good Place, wasn't nominated for any awards, she and Blake sure did win the night for their starring role as a picture-perfect couple.

So, what's next for this incredibly sweet and talented couple? Who knows. They seem like they're pretty darn happy with the way things are right now, though.