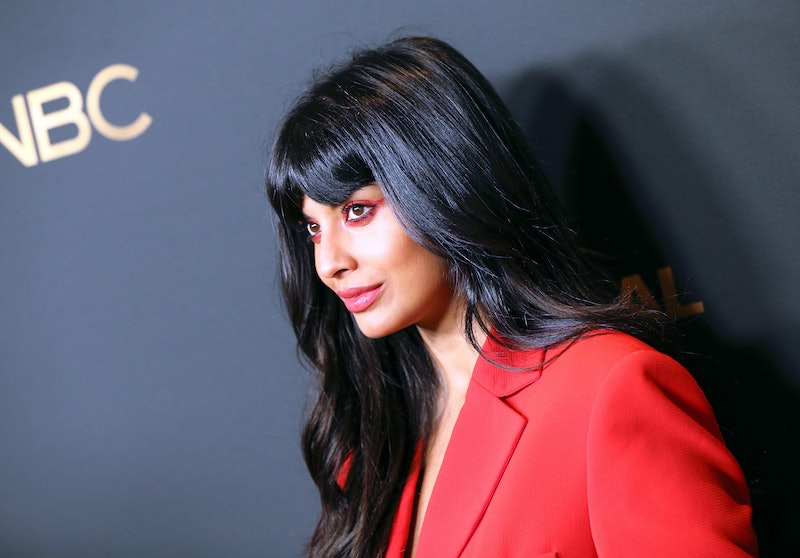 HBO's Euphoria is a hit on many levels. The series takes an honest and often difficult look at the youth of today, their relationships, their identities, their addictions, their struggles, and their triumphs. The show is also influencing fashion and culture. Actor Jameela Jamil rocked Euphoria-inspired makeup while at a Hollywood event this week. She also ran into Hunter Schafer, who plays Jules on the show, at said event.

Euphoria's beauty looks are usually defined by statement eye makeup. That's a critically important convention since it expresses who the characters are and what they are feeling or going through. That aesthetic is crossing over and making a major impact IRL. Jamil's electric red eyeshadow was party-ready and will look very familiar to fans of the show. It took direct inspo from several red eyeshadow looks that both Jules and the character Kat have rocked during the debut season.

Jamil, who is known for her outspoken social media posts regarding the often unattainable and outdated standards of the beauty industry and how those can negatively effect the self-esteem of young people, posted her red hot look on her personal Instagram stories. She also revealed that she did her makeup herself, according to PEOPLE. Furthermore, she captioned her post showing off her red-framed eyes by admitting she had only watched the riveting series once thus far and was already inspired to replicate its style.

Jamil wore the smoky, all-red cat eye to the InStyle Badass Women Dinner held on Aug. 13. She opted for heavy and matte scarlet shadow swept all over the lid and extended a thick, expertly executed wing at the outer corners. She finished the look by smoking out the bottom lash line in the same crimson shade. She buffed it out for a softer, more diffused look. Jamil also went with a barely there face, light lips, and beachy waves. Since her eye makeup was so intense and dramatic, it was best for Jamil balance things out by going neutral with her other features. The end result was absolutely stunning, just like the looks that fans see the beloved Euphoria characters pump on a regular basis.

Jamil's red eye makeup also matched her roomy and loose-fitting blazer and romper. Red eyeshadow can be notoriously tricky to pull off. But Jamil, like Jules and Kat, just gave new meaning to the term "red eye." Jamil's decision to go monochromatic with her outfit and eyeshadow was a boss move. The entire look worked for her — so much so that she should pay it a salary. Jamil might inspire you to create your own unique spin on Euphoria­-style makeup, too.

Later in the evening, Jamil crossed paths with Schafer. The duo embraced in a photo posted to Jamil's Insta story and she even captioned the shot: "Speaking of Euphoria...," since life was certainly imitating art.

Given the show's impact and critical raves, HBO recently made the maroon hoodie worn by Zendaya's character Rue available for purchase on its website. The top is essential to her backstory and now fans can connect with the show even further through a piece of clothing.

Ultimately, Euphoria's influence will continue to ripple through and be felt by the fashion and beauty realms. Jameela Jamil's red eye makeup certainly won't be the first, last, or only time a celeb copies the show's beauty aesthetic.