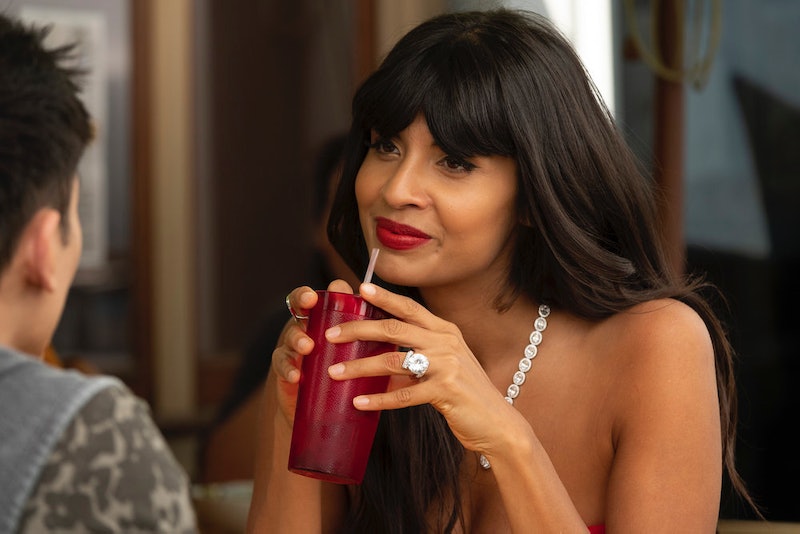 Not sure how Tahani Al-Jamil feels about this news — or her sister, Kamilah, for that matter — but Jameela Jamil's The Good Place Season 4 photos will not be photoshopped. Jamil announced the news during an Instagram takeover with BlogHer, where she explained that she made a deal with NBC to make sure that her promo images for the final season will go untouched. It's a big win for Jamil, an advocate for body positivity and beauty transparency. But, this announcement also begs the question, is this the good place?

While on set at the final photoshoot for The Good Place, Jamil announced via BlogHer's Instagram that she got NBC to agree to "not airbrush her promo photos" that will be on billboards and in magazines and, basically, everywhere The Good Place is, as reported by Stylecaster. As for why Jamil fought so hard for this, she said in an Insta video for BlogHer, "I just don’t want to see that on myself, and I don’t want other people who follow me to see some sort of AI perfect imagery of me."

Jamil's anti-Photoshop stance is nothing new. For years, she's talked about how painful it was to see magazines photoshop her nose and skin to look more caucasian. She went as far to call airbrushing "one of the foulest things to have happened to women" in an interview with the Ways to Change the World podcast.

Along with BlogHer, Jamil is working towards "more responsible advertising for young women that is protective and doesn't shame them into buying products." For the past year, the actor and activist has called out other celebrities like Khloé Kardashian and Cardi B for putting their name on weight-loss supplements and teas, calling it "irresponsible."

On Kardashian's Instagram in March, Jamil wrote, in the now deleted comment, "If you're too irresponsible to: a) own up to the fact that you have a personal trainer, nutritionist, probable chef, and a surgeon to achieve your aesthetic, rather than this laxative product...And b) tell them the side effects of this NON-FDA approved product, that most doctors are saying aren't healthy [...] then I guess I have to.”

Throughout her career, she has taken the approach with her fans that honesty is the best policy. In fact, Jamil has been trying to heal Hollywood of their need to hide the truth about what it's really like to be a woman in the business. She told Bustle last year that "men are told to be successful enough to date a supermodel, women are told just to be a supermodel. This is ridiculous. It’s so empty and boring."

In a separate post from The Good Place photoshoot, she even shared a video with the hashtag #transparencymatters as she removed her "hair-halo," showing off the fake extensions that help her hair look so luscious on the screen. "Behind the scenes on every hair growth candy advert on social media," she wrote, shading those who pretend their full locks are all theirs.

There's nothing wrong with using tricks to add a little oomph to your look, whether it's fake hair or makeup or even a little retouching. But it's nice to see a celebrity acknowledge that what fans so often see in advertisements, on social media, and on screen, isn't necessarily real.

More like this
At 14, Tatiana Maslany Was Obsessing Over Tamagotchis & The Spice Girls
By Gabrielle Bondi
Beyoncé & Madonna’s “Break My Soul” Remix Honors A Group Of Black Icons
By Stephanie Topacio Long
Netflix Reveals First Look At Wednesday In The 'Addams Family' Spinoff Series
By Bustle Editors
'Grey’s Anatomy' Star Kevin McKidd Hinted How Ellen Pompeo’s Step Back Will Change Season 19
By Grace Wehniainen
Get Even More From Bustle — Sign Up For The Newsletter