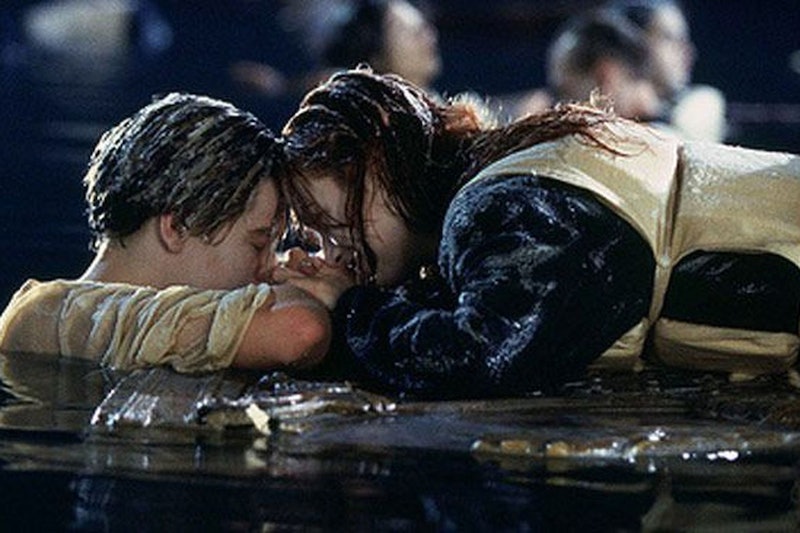 It's a question that dates all the way back to 1997. Could Rose and Jack both have fit on that door in Titanic, in order to prevent Jack's senseless and untimely death? In other words, did Rose really have to "let go?" Really? Come on. Couldn't she have just stopped being a plank hog and scooted over? Here to settle one of the most haunting and polarizing Titanic questions of our time is the director of the seminal 1997 film, James Cameron. He recently gave an interview to the Daily Beast and (once and for all) tried to debunk the age-old theory that there was more than enough room for both Jack and Rose on that door.

"Look, it’s very, very simple: you read page 147 of the script and it says, 'Jack gets off the board and gives his place to her so that she can survive.' It’s that simple." But, is it?

Update, 11/26/17: In an interview with Vanity Fair, Cameron is still holding steady on this opinion, citing storytelling needs and psychics as the reasons for Jack's death. He told Vanity Fair in an article published on Nov. 26:

And the answer is very simple because it says on page 147 [of the script] that Jack dies. Very simple. . . . Obviously it was an artistic choice, the thing was just big enough to hold her, and not big enough to hold him . . . I think it’s all kind of silly, really, that we’re having this discussion 20 years later. But it does show that the film was effective in making Jack so endearing to the audience that it hurts them to see him die. Had he lived, the ending of the film would have been meaningless. . . . The film is about death and separation; he had to die. So whether it was that, or whether a smoke stack fell on him, he was going down. It’s called art, things happen for artistic reasons, not for physics reasons.

Earlier: Titanic truthers have spent 20 years thinking otherwise. Mythbusters even dedicated an episode (2012's "A Titanic Tale") to busting the myth that Jack couldn't have fit on the plank. It was an episode that Cameron appeared on, wherein he declared that we were all missing the point — the point being Jack had to die because it said so in the script. Now, the dream crusher director has some choice words for the conclusion that Mythbusters drew a few years back.

So you’re talking about the Mythbusters episode, right? Where they sort of pop the myth? OK, so let’s really play that out: you’re Jack, you’re in water that’s 28 degrees, your brain is starting to get hypothermia. Mythbusters asks you to now go take off your life vest, take hers off, swim underneath this thing, attach it in some way that it won’t just wash out two minutes later — which means you’re underwater tying this thing on in 28-degree water, and that’s going to take you five to ten minutes, so by the time you come back up you’re already dead. So that wouldn’t work. His best choice was to keep his upper body out of the water and hope to get pulled out by a boat or something before he died. They’re fun guys and I loved doing that show with them, but they’re full of sh*t.

Cameron's original argument on Mythbusters was more of a "Hey, it doesn't matter if we got the prop size wrong, because Jack needed to die so the story made sense and Rose could perish as an old lady, warm in her bed alone, and with her necklace, and her sad memories, and her lots of babies, and everything would be sad, and you would cry." (I'm paraphrasing, but you get it.) From this interview, it sounds like he's changed his tune a bit and really took the time to ruminate over the specifics.

I'm not saying Cameron's wrong; he's the visionary behind the whole story, so he would know the intentions. I'm just saying, can you really break Jack and Rose's all consuming love down to "physics" and "science" and "hypothermia"?