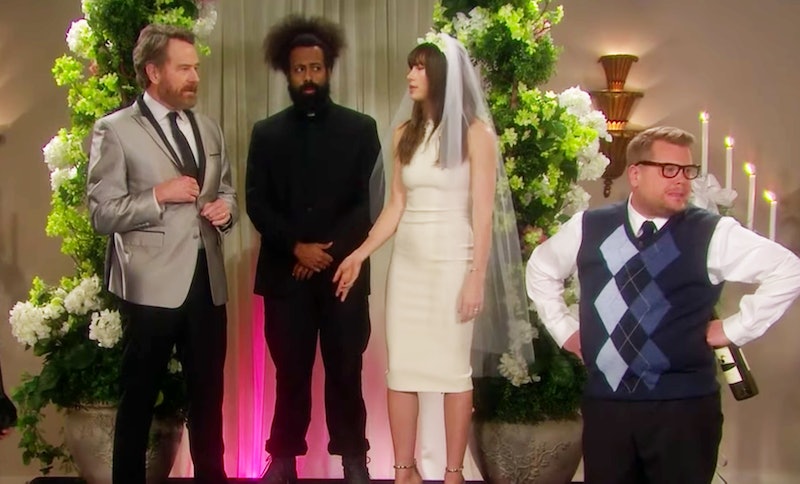 James Corden — patron saint of giving the world what it doesn't even know it needs until it gets it — gifted us a brand new Kanye West-themed soap opera on Thursday night's The Late Late Show, and it's fire. For one thing, this The Bold and the Lyrical segment boasts Jessica Biel as a bride with a whole multitude of wannabe-lovers. For another, her groom-to-be is none other than Breaking Bad's Bryan Cranston. Sure,it felt a little like that one Amy Schumer sketch "Last F*ckable Day" ("I just heard Bruce Willis got engaged to a girl who's 24 years younger than him") with the age gap, but it did make for a delightfully high-octane pairing.

The actual satire part of the sketch made one thing clear, though. While it scored plenty of laughs by shoehorning lyrics from Kanye songs into one chaotic wedding moment — like mild-mannered Cranston uttering lyrics like "I made that b*tch famous" — it never for a moment made me doubt that Kanye's lyrics are gold. Sure, they're intensely dramatic; heck, they even edge into the territory of melodrama. But, in an age in which minimalism rules, whether in music (tasteful lofi electro), decor (when will midcentury modernism every go out of style?), or coffee (in certain trendy cafes, you're considered coffee-illiterate if you order a good bean with milk), Kanye's relentless emoting still feels like a breath of fresh air.

Kanye is most often praised for his talents as a magpie-producer — sampling well-known threads of melody in bold new ways that reinvent the originals. But less lip-service is paid to his lyrics, which I believe are just as worthy of dissection.

The joy of his most recent work, The Life Of Pablo, is the way it lets the listener step into a fantasy. It says, seductively, to forget about the little things. Forget about your unpaid mobile bill, that red wine stain you need to scrub out of your dress, the hundred tiny to-do list items you need to strike off before you can start thinking about the big things: art, God, love, death. It's no coincidence that the song the album starts on, "Ultralight Beam", contains the refrain "This is a God dream." Or that “Feedback” explores the connection between creativity and eccentricity with the line, "Name one genius that ain't crazy.” Kanye isn't afraid to take on big topics in his songs. And he's not going to front and dial things back. He's comfortable with taking up space.

It's perhaps the bigness of Kanye's aesthetic that makes him such a ripe candidate for satire. But, in an industry in which plagiarism is rife, it's refreshing that he still, after so many years and so many different albums, still has his own, distinctive musical voice.