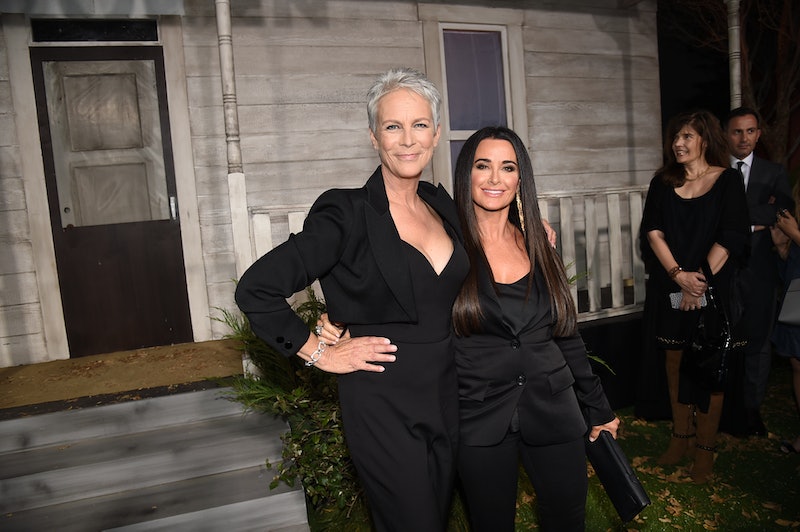 Knowing firsthand how well she can handle the horrors of a Real Housewives reunion, Kyle Richards' RHOBH costars reacted to her Halloween Kills role in the most supportive way. After Richards confirmed she'll reprise her role of Lindsey Wallace from the original 1978 Halloween in an Aug. 30 Instagram post, her castmates — both past and present — from the Bravo franchise shared her excitement. Among the Bravolebrities showing Richards love included: Erika Girardi (aka Erika Jayne), Lisa Rinna, Teddi Mellencamp, Dorit Kemsley (and husband PK Kemsley), RHOBH alum Heather Dubrow, and the often-featured Faye Resnick.

"It’s true 🎃 I am beyond honored and thrilled to be a part of #halloweenkills And reprising my role as Lindsey Wallace," Richards captioned the IG post, which included images of her and Jamie Lee Curtis (who played Laurie Strode) taken 40 years apart. "I have always been so proud to have been a part of Halloween. Bringing Lindsey back is very exciting! #halloweenkills2020"

Girardi and Rinna both used the celebration hands emoji to express their congrats. "This makes me so happy!!! 🙌🏻," wrote the "XXpen$ive" singer, while the latter added, "HOW COOL IS THIS?!!!!! 🙌🏼"

Meanwhile, Mellencamp commented, "Love love love this!" and Beverly Beach designer Kemsley chimed in, "So excited!" As for Richards' longtime pal Resnick, she wrote, "So excited and proud of you Kyle💕💕." Added Dubrow, "🍾🍾🍾🍾 AWESOME @kylerichards18 !!!"

Of course, Richards' family also contributed to the lovefest with daughters Alexia Umansky writing, "THATS MY MOM 😎😌😎😌," and Sophia Umansky sharing Variety's announcement of the casting news in her IG Stories with a text overlay noting she was having a "proud daughter moment." (Richards also reposted one of Sophia's Stories that included the black and white photo of the RHOBH star and Curtis from 1978, along with a hand-drawn heart that she added.) Finally, Richards' sister Kathy Hilton commented, "Oh yeah!!!!!!👹🎃"

Back in July, Universal Pictures announced that it will release Halloween Kills on October 16, 2020, with the final chapter, Halloween Ends, debuting on Oct. 15, 2021, per The Hollywood Reporter. Earlier this week, Variety also exclusively revealed that Anthony Michael Hall joined the Halloween Kills cast in the role of Tommy Doyle, a character who also appeared in the 1978 original, as well as 1995’s Halloween: The Curse of Michael Myers. (Paul Rudd played Tommy in the latter.)

On July 19, Curtis posted a teaser for Halloween Kills on social media, writing: “It ain’t over till the fat lady sings.” Well, my friends and fans....I’m just WARMING UP🔥🔪 Happy Halloween 🎃2020/2021"

The 2020 horror sequel, of course, will reunite her and Richards who appeared together in 1978's Halloween in which Curtis' Laurie babysat the RHOBH star's Lindsey amid Michael Myers reign of terror. In celebration of the film's 40th anniversary last September, Curtis and Richards reflected on the experience.

"I always have that memory of me, on the last day of shooting, of you carrying me all the way back to my dressing room, Richards told Curtis during a 2018 interview with Entertainment Tonight. "I've never forgotten that." (Curtis added that she also has "beautiful memories" of her costar.)

"Making the movie I was never scared, [but] seeing myself in it was terrifying!" Richards added to ET.

It remains to be seen, however, how a confrontation with Michael Myers will compare to a sparring match with one of Richards' adversaries in Beverly Hills. Either way, hopefully Halloween Kills won't leave fans saying, "Goodbye, Kyle!"