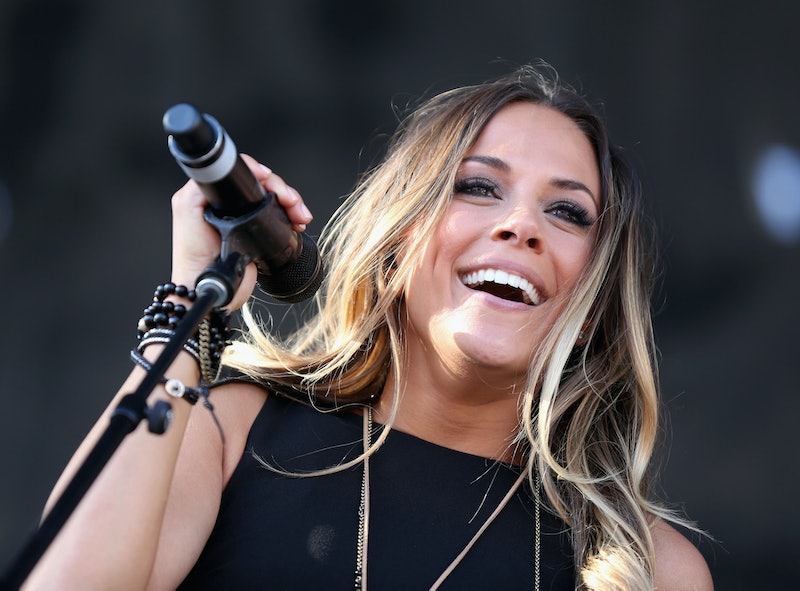 After opening up about suffering several miscarriages at the end of last year, Jana Kramer is pregnant with her second child, the singer confirmed to People on June 25. Kramer and her husband, former NFL player Mike Caussin, have soldiered through some significant ups and downs over the course of their marriage, but now the couple — who just celebrated their third wedding anniversary in May — have truly sunny skies ahead.

"I’m so excited," the expectant star told People. "We lost in October and then we did an IVF cycle and we lost in February, so I want to be able to be like, 'Hey, I know it’s hard but just try to have some hope.'" Clearly, Kramer wants her pregnancy to be a sign of hope to other women struggling to get pregnant. And she's never shied away from speaking honestly about fertility.

Kramer confirmed her pregnancy on Instagram as well, and shared a sweet snap of herself, Caussin, and their two-year-old daughter Jolie. "Surprise! We have a rainbow baby on the way & couldn’t be more excited!" she wrote in the caption. "Jolie is going to be a big sister & we’re becoming a family of 4!" Kramer also revealed her due date in the photo, which included a sign propped up in front of Jolie that read, "Only child expiring November 2018." Cute!

It's been a bit of a rocky road to baby number two, Kramer revealed on her podcast (as reported by E! News). In the June 25 episode of Whine Down With Jana Kramer, the singer admitted that she'd suffered a total of five losses — three miscarriages and two chemical pregnancies — before finally getting some good news.

She and Caussin went through at least two rounds of IVF, but ended up getting pregnant naturally by tracking her ovulation cycle with an Ava bracelet. "I didn’t know I ovulated late and I don’t know if it’s because my cycles are messed up because of my miscarriages," Kramer said on her podcast, "but it said I ovulated on the sixteenth or seventeenth day so that’s what we trusted and I got pregnant."

Kramer first got real with fans about suffering several miscarriages via an emotional Instagram post back in December 2017, and emphasized the importance of sharing her experience with all the other women out there who'd dealt with the same kind of loss. "Today I am 1-3," the singer wrote. "I debated posting this for the exact reason why it’s a silent struggle. I don’t want I’m sorry or sympathy. I just don’t want to feel alone. And I know I’m not."

In an effort to remove the stigma around miscarriages, Kramer's caption (which you can read in full here) continued,

"This unfortunately isn’t my first loss. When I first found out I was pregnant I wanted to shout it from the rooftop but I know for reasons like this we have to wait. So because we don’t tell many, we have to suffer silently...and suffering silently was my thing in the past, but it’s not now. For the women out there who have miscarried in the past and need support and a place to grieve their little one lost or to those in the thick of it like me who are currently grieving and in pain, let us all be there for each other."

While it certainly can't be easy to discuss that kind of loss — especially as a celebrity on a very public platform — hopefully Kramer's honesty in regards to her multiple miscarriages and her new baby on the way will encourage other women to stay positive and keep trying. Congratulations to Kramer, Caussin and big sister Jolie on the happy news about baby number two!