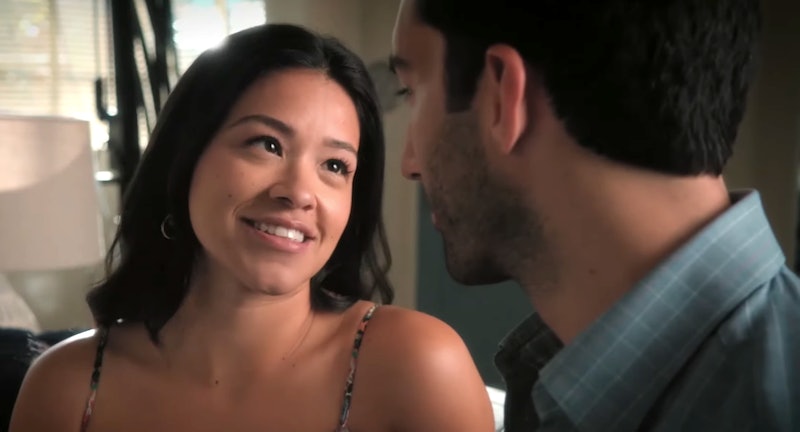 Spoilers ahead for Jane the Virgin Season 5. Jane and Rafael almost miss their wedding in the Jane the Virgin series finale, but the pair end the show in wedded bliss. That means that even though it happens offscreen, they are able to perform their wedding dance. Jane and Rafael's wedding song on Jane the Virgin is played in "Chapter 100" while the pair briefly practices the dance that Xo was teaching them in "Chapter 97." Just like how we never get to see their entire dance, the song's lyrics never play. But "Todo En Mi Vida" by Mexican singer and actor Ximena Sariñana is a pretty perfect song for Jane and Rafael to dance to on their big day.

Jane and Rafael performed an elaborate song and dance number when they got back together in "Chapter 93." So while fans may be disappointed they didn't get to see the newlywed couple's full dance at their wedding reception, we know these two can move together.

One of the themes of Jane the Virgin is destiny. Once, Jane thought her love with Michael was destined to be. But in "Chapter 98," she says that destiny worked in a roundabout way to have Michael end up with his new fiancée Charlie. She also claimed, "Rafael is my destiny," in "Chapter 88" when she decided between Rafael and Michael for the final time. And considering that Sariñana sings in the song everything in her life brought her to her love, you can see why Jane the Virgin would pick this song for Jane and Rafael's wedding.

Another special song featured in the finale is "Una Flore" by Colombian musician Juanes. (Coincidentally, Juanes also has a song called "Todo En Mi Vida Eres Tú" — "Everything In My Life Is You.") "Una Flore" was released in 2014 — the same year Jane the Virgin premiered — and was used in "Chapter 1" during The Passions of Santos as Jane, Xo, and Alba watched. The Spanish-language song acted as the theme for The Passions of Santos, but it also played while Jane kissed Michael and up until Rafael was introduced onscreen for the first time. And then it played again during the end of the episode when the narrator announced that "everything changed" after Jane proposed to Michael and her flower dropped out of her hair.

Knowing how Jane the Virgin ends, the use of the song was a bit of foreshadowing to show just how much things changed when it came to her relationships with Michael and Rafael. And the lyrics are particularly fitting for Jane's journey from virgin to marrying Rafael Solano. "Une flore" translates to "a flower," which was the symbol that Alba used to show Jane how sacred her virginity was. Plus, like snow was for Jane and Michael, flowers are the symbol of Jane and Rafael's love and "Una Flore" is all about the passion and love the flower represents.

One of the legacies of Jane the Virgin is that it showcased Latinx culture on American television in a major way. So these song choices also help to expose Latinx artists like Sariñana and Juanes to more audience members in the U.S. But for the storyline, the lyrics of "Todo En Mi Vida" feel so wonderfully relevant to where Jane started back in "Chapter 1" to where she ends with Rafael in "Chapter 100." It's just a shame that fans will never get to see this happy couple perform their full wedding dance. But at least we know that Jane and Rafael will be dancing together for the rest of their lives.