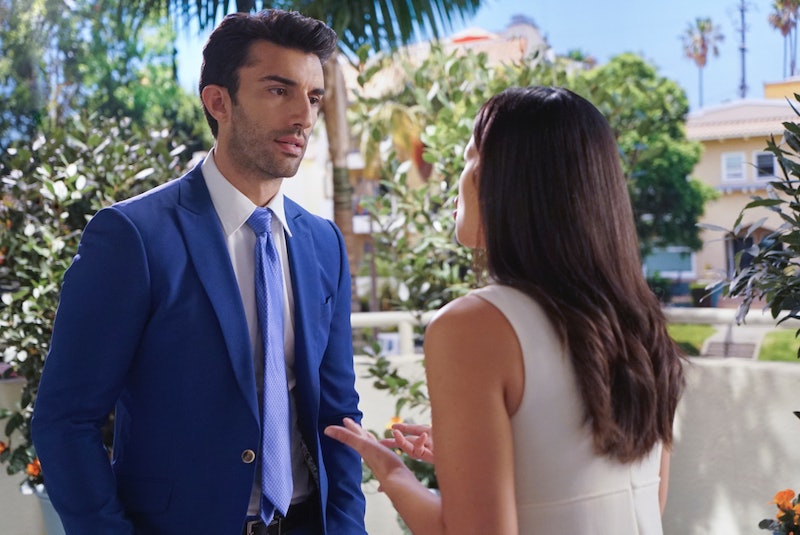 Spoilers for Jane the Virgin Season 5, Episode 13 ahead. After only just getting back together, it seemed that Jane and Rafael were getting married on Jane the Virgin in "Chapter 94." But while Rafael did propose and a small civil ceremony was impending, this on-again, off-again couple decides to throw a bash to ring in their nuptials. That most likely means that the previously-released set photo of Gina Rodriguez in a wedding dress will be at Jane's wedding to Rafael. This celebration of love will be appropriate for the ending of the telenovela-inspired show. But, as "Chapter 94" covers, Jane and Rafael going big with their wedding also shows that this couple is ready to move on from Michael's shocking return.

Everyone in Jane's life is happy for her to be back together and engaged to Rafael — except for their son Mateo. He tells his parents that he doesn't believe they will really get married since they've broken up before. In order to make their son happy, they decide to go to the courthouse for a quick ceremony. But this decision also reflects Rafael's insecurities regarding Michael. With all the directness of an innocent child, Mateo taps into this when he says that his parents are rushing the wedding "so Michael doesn't come back and take Mommy away again." Geez, kid. Way to kill the mood, indeed.

But Mateo bringing this up as bluntly as he does leads to some important revelations for Rafael and Jane.

Raf realizes he wants to know what happened when Jane went to Montana with Michael and that he's still a little wary. And Jane realizes she's rushing the marriage because of her guilt that she left Raf in order to explore things with her husband who came back from the dead. Petra tells Raf he has to get over the Michael thing and trust Jane again. But the real moment this couple needed comes when Jane speaks up for herself.

Rather than be consumed with guilt, Jane defends herself when Rafael says he's not confident she won't go back to Michael. "My husband came back from the dead. It's an impossible, crazy situation — what else could I have done?" Jane tells him. "You know me, Rafael," she adds when Rafael protests. "I had to explore things with him. He was my husband! And I can't feel guilty about that forever." And while it was Rafael's prerogative to protect his heart, this is exactly what Raf needed to hear after breaking up with Jane and unfairly not understanding her need to see if she still had feelings for Michael.

It wouldn't have been right if Jane and Rafael had gotten married before having this conversation. Nor would it have been right for Jane the Virgin if Raf and Jane's wedding had been so understated. So, just as it had seemed thanks to that set photo, Jane will get married on Jane the Virgin again with a big wedding. And this time it will be to the other love of her life — Rafael.

Of course, the narrator mentions their wedding won't go so smoothly and there has been quite a few hints at what could cause problems. First off, the set photo showed Luisa standing next to Jane at the wedding. If Luisa is actually working for Rose, that could spell trouble. Then, Brett Dier will return as Michael one last time, so maybe it will be at Jane and Raf's big day. Plus, Jennie Snyder Urman teased to TVLine that there will be deaths and a pregnancy all before Jane the Virgin is over.

But even if the wedding doesn't go off without a hitch, the one thing Jane the Virgin fans should feel confident about is that Jane and Rafael are going to spend the rest of the series — and their lives — together. Because even all of the telenovela twists thrown their way can't stop their love anymore.