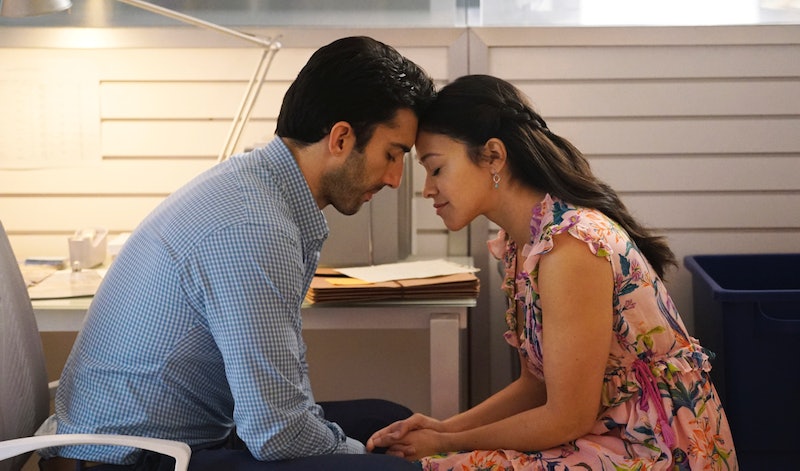 Spoilers for Jane the Virgin ahead. "Sometimes when you're so full of emotion you feel like you might burst, you just have to let it out and sing," Xo tells her grandson Mateo in "Chapter 93." And that's how #TeamRafael must be feeling now that Jane and Rafael are back together on Jane the Virgin. Rafael comes to realize no one will make him as happy as his number one love Jane. Jane the Virgin celebrates this momentous occasion with a musical number and the love-filled song should mark a permanent turning point in the love life of Jane Villanueva. While the musical number had a dreamlike quality to it, it seems like the two are really — finally! — together for good.

Jane already answered the debate over #TeamRafael and #TeamMichael in Season 5 when she chose Rafael over her husband back from the dead. But Rafael wasn't able to let himself love Jane again after fearing he'd lose her to Michael again — that is, until "Chapter 93." Dating Sophia Bush's Julie helps him come to the grips with the fact that he still loves Jane and doesn't want to be without her anymore. So they break into a song-and-dance number inspired by Mateo's school play after kissing underneath their signature tree. While it's their love they are celebrating, Jane the Virgin is a family affair, so they are joined by Mateo, Xo, Alba, Petra, and Rogelio — and, much to Rogelio's chagrin, even side characters like Brooke Shields' River Fields, Krishna, and Milos.

There have been a number of musical numbers in Jane the Virgin over the course of the series. Besides performances by Xo and Rogelio, musical fantasy sequences have been used in scenes like when Jane married Michael ("Go Have Sex, Jane") and when Xo decided to own her own dance studio ("Open a Dance School" to the tune of "Beauty School Dropout"). So it's perfectly in character for the show to have a song-and-dance number — especially when celebrating something so glorious as Rafael and Jane getting back together. Really, the only complaint could be that Jane the Virgin hasn't given us an entire musical episode.

Well, another complaint Michael fans may have is that Jane and Rafael appear to be officially endgame now. Yet, that's been the reality since "Chapter 88," so the show gave viewers a few episodes to accept the inevitable conclusion. Because even if you don't feel like Rafael — who sings, "I've always known that we were meant to be" — it's been clear for quite some time now (arguably, since Season 1) that Jane and Rafael would end up together.

The lyrics in the musical number they sing are, "Everything needs love to grow." And Jane and Rafael have grown so much as individuals and as a couple in large part because of their love — both platonic and romantic — for one another. These two are family no matter what and now with (seemingly) all other obstacles out of their way, they can finally form that cohesive family unit with Mateo that they've been imagining since Season 1. So even if you weren't #TeamRafael before, be happy for Jane that everything in her life right now is love, love, love.

More like this
The Best 'Grey's Anatomy' Intern Moments, From MAGIC to Glasses
By Grace Wehniainen
24 Years Ago, 'Friends' Dropped Its Most Underrated Ross & Rachel Episode
By Grace Wehniainen
Netflix Reveals First Look At Wednesday In The 'Addams Family' Spinoff Series
By Bustle Editors
9 Movies & TV Shows That Prove Stanley Tucci Elevates Everything He’s In
By Jake Viswanath and Radhika Menon
Get Even More From Bustle — Sign Up For The Newsletter