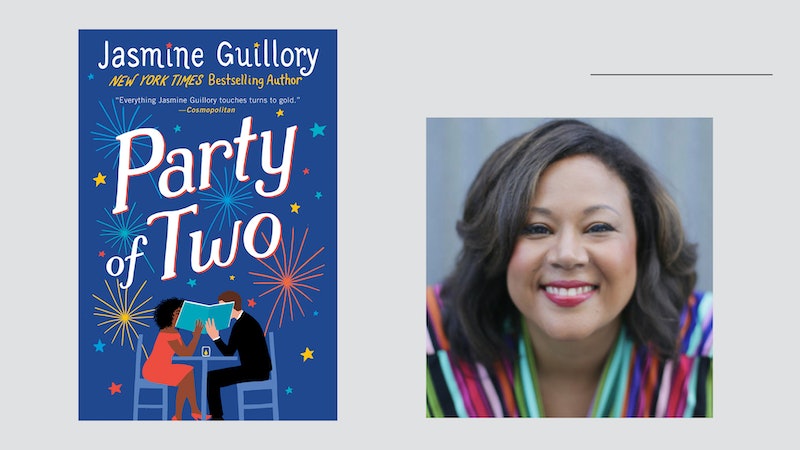 Jasmine Guillory rocketed onto the romance radar with 2018's The Wedding Date, and she hasn't slowed down since. June brings Party of Two, the fifth title in Guillory's rom-com series, which you can start reading right now, exclusively on Bustle. It's the perfect summer read for fans of the 2019 Charlize Theron and Seth Rogen blockbuster, Long Shot, so settle in for some laughs.

Jasmine Guillory's Party of Two centers on Olivia, a lawyer who's only recently made a career move to Los Angeles when she meets Max, an up-and-coming politician, in a hotel bar. Max is too centered in the spotlight for Olivia to ever consider dating him... or is he? As the new couple don disguises and try to trick the ever-curious press, their game quickly spirals out of hand, and what was once a secret may explode, hilariously, into the public eye.

Fans of The Wedding Date will recognize Olivia as the sister of that novel's protagonist, Alexa, but reading the previous books in the series isn't necessary to enjoy Party of Two. Even if you've never read a word she's written, Guillory will win you over with this fantastic new rom-com. Start reading Jasmine Guillory's Party of Two here:

Excerpt from Party of Two, exclusive to Bustle

Olivia turned back to her table to grab her purse, still with a smile on her face. When she’d seen that Senator Max Powell was going to be the keynote speaker for this luncheon, she’d wondered if he would remember her; that was, if he even noticed her in the crowd. And then, in the middle of his speech, he’d looked straight at her, and she could tell from his very unpolitician like grin that he’d recognized her.

If he was a normal person, and not a senator, she would have thought he was flirting with her when he smiled at her like that, and also when he talked to her just now. But politicians were charmers in that way — everyone must think Max Powell flirted with them. That was probably how he’d managed to win the senate seat in the first place.

She tried to put Max Powell out of her mind, and made her slow way out of the ballroom. She hated that she couldn’t accept Bruce’s invitation to be on the board; it was exactly the kind of thing she’d love to do, and would be a great way to get to know her new city. But nonprofit board seats meant hefty donations, and she had to be careful with money right now. She wasn’t in a position to give any more than a nominal amount until she and Ellie truly got this firm off the ground. However, luncheons like this were prime networking opportunities — before she left the ballroom, she’d given out over twenty business cards to other lawyers, and made coffee dates with three people she hadn’t seen in years. You never know which connections could bring new business to Monroe & Spencer.

She got back into the office to find Ellie in the middle of hanging up artwork on the walls. Olivia looked around at the frames on the floor, the tools on the bookshelf, and the glee in Ellie’s face as she banged hooks into the wall with a hammer.

Ellie paused, hammer in the air.

“Absolutely.” She brushed her immaculate hair back. “I love a chance to use a hammer in the middle of the work day. I’m going to have to keep this and a piece of wood and a pile of nails in my office, just to work off my rage for those times opposing counsel tries to talk down to me.”

“‘Tries’ is the operative word there, Ellie. I don’t think anyone has actually gotten away with that in years.”

Ellie lifted a painting and hung it carefully.

“Oh I know, but I still have to be diplomatic and all honey voiced as I hand their asses to them. Sometimes I just wish I could tell them to go f*ck themselves — when those impulses come over me, I’ll just look at this hammer and feel better.”

Ellie looked like the gentle, blond, polite, perfectly coiffed Southern girl that she was. Which is what made it all the more fun when people underestimated her.

She and Olivia made an excellent team.

Olivia sat down at her desk, and spent the next few hours jumping back and forth between emails and phone calls with potential and existing clients, tinkering with their brand new internal filing system, updating their website, and jumping on a quick call with their accountant. Back when she was a big firm lawyer, she’d have only done the client work and nothing else; all of her administrative work had been done for her like magic by her secretary and the firm. But she and Ellie had decided not to have any support staff, at least at the beginning, so they were learning how to do all of this themselves... some of it better than others.

Just before five, Ellie knocked at her open office door with a twinkle in her eye.

“Delivery for you, and it looks fun.”

Olivia looked away from her computer screen for the first time in over an hour and blinked.

“Ooh, is it the pens I ordered?” It made her feel very boring to be so excited, but she really had been looking forward to those pens.

“Nope.” She held up a big white handled bag. “Looks like something from a bakery.”

Olivia stood up from her desk and frowned.

“I didn’t order anything from a bakery. It must be some mistake.”

Ellie held up the delivery slip.

Olivia took the bag from her and set it on her desk.

“That’s weird. Maybe my sister sent me something?”

Ellie’s phone rang, and she rushed to pick it up.

“I’m coming back to see what that is!” she shouted on her way into her office.

Olivia took the bakery box out of the bag. There was an envelope taped to the top and she pulled it open with a smile on her face. What a nice thing for Alexa to do.

To Olivia Monroe — Just in case you’re still in search of some excellent cake. Good seeing you today. Maybe we can do it on purpose next time?

This could not be.

This was her sister playing a trick on her, right?

She flipped open the box. Inside was a big layer cake, covered in chocolate frosting, with Welcome to California written on it in blue.

She looked from the cake, to the note in her hand, back to the cake.

This must be her sister. Except her sister didn’t know she’d seen Max today. No one did, as a matter of fact, except for the people who’d seen them talking for about forty five seconds in the ballroom after the luncheon. And none of those people knew they’d met before. Or what they’d talked about.

Olivia walked back around her desk and sat down, still staring at the card clutched in her hand.

And, in his note along with the cake... was he asking her out?

He couldn’t be, right?

Was a senator asking her out? From anyone else, this note would be an unequivocal yes, but he was a senator!

Was he some sort of scumbag who went around doing this all the time? It had only been — she looked at her watch — four hours in between when she'd seen him at the luncheon and when the cake had arrived at her office. Only someone who was really practiced in this kind of thing would work that fast.

Okay maybe, but he’d obviously remembered their conversation at the bar three weeks ago — did scumbags do that? And if he was a scumbag, why hadn’t he pounced on her at the bar, anyway? She’d had enough experience with men to usually identify the creepy ones right off the bat — she wouldn’t have spent that long talking to him at the bar, gin or no gin, if he’d given her bad vibes.

And yes, fine, she had spent more than a few moments in the last few weeks fantasizing about what could have happened if he’d invited her up to his room. And she had to admit he’d been pretty hot in his very well-tailored suit and tie. Apparently she found both Senator Max Powell and Max in the baseball cap equally attractive.

Who was this guy even? All she knew about him was from the times she’d seen him on MSNBC, where he’d been appropriately respectful to Rachel Maddow and dodged questions about his presidential aspirations, but she needed to find out more. About both his politics, and his personal life.

But before she did any of that, she needed to eat a piece of this cake.

Olivia found a knife and cut a fat slice of the cake. Three layers. Had she mentioned to Max that she loved a three-layer cake the best? She couldn’t remember.

She took a bite, and closed her eyes in a silent celebration. This was exactly what she’d been craving that night — rich, tender, chocolatey cake, between layers of dark chocolate frosting. It was perfect.

Now, to see if the man measured up to the cake.

Jasmine Guillory's Party of Two is out on June 23 and is available for pre-order today.