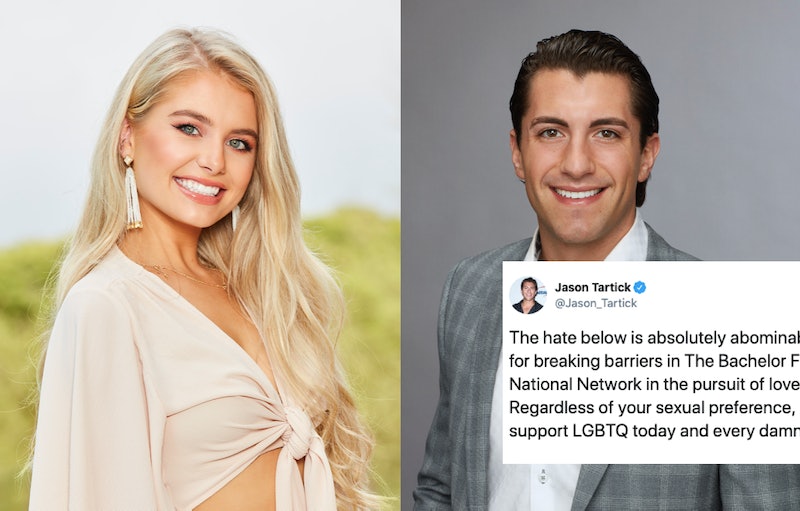 Demi Burnett has received so much love from Bachelor Nation after the Bachelor in Paradise Season 6 trailer revealed that she had found love with a woman. Unfortunately, she's also received some backlash regarding her sexuality. But, her fellow Bachelor alumni have her back in light of the online hatred, as Jason Tartick defended Bachelor in Paradise star Demi on Twitter after she received some ignorant messages concerning her queer identity. And he's not the only one who's speaking out in defense of the iconic reality star.

On July 24, shortly after the BiP trailer was released and Demi opened up about being a proud "queer queen," the former Bachelor contestant tweeted about one of the incredibly disgusting messages that she received from a user on Twitter in which a gay slur was used. In response, numerous members of the Bachelor community, including Jason, took to Twitter to voice their support for Demi and to spread some positivity.

Jason had a strong message for those who wanted to spread any of their ignorance or hatred, as he began his tweet with, "The hate below is absolutely abominable!" He continued to praise Demi for being open about her sexuality on such a national level, as he added,

"Bravo to Demi for breaking barriers in The Bachelor Franchise and on a National Network in the pursuit of love and happiness. Regardless of your sexual preference, love is love is love. I support LGBTQ today and every damn day! #pride"

Demi was totally here for Jason's majorly supportive message, as she responded on Twitter with, "THANK YOU JASON!!! Your support means so much to me." Icons supporting icons? You love to see it. Demi also took to her Instagram Story to share Jason's note, as she posted a screenshot of the tweet, which she captioned with, "We STAN an ally!!!!"

Jason's defense of the charismatic Paradise star came days after the trailer for Season 6 of BiP revealed that Demi had fallen in love with a woman, which is a major moment for the ABC series. In the preview clip for the series, the reality contestant said, at one point, "I don't care who sees this. I know that I love this girl. I'm so happy that I found her and I can definitely picture being with her for the rest of my life."

As previously mentioned, many Bachelor alumni have voiced their support for Demi after the release of the trailer. And their messages of love and support have definitely helped to drown out some of the hatred. From Jason's girlfriend, former Bachelorette Kaitlyn Bristowe, to some of Demi's Paradise castmates, the reality star has so many supporters on her side.

On Twitter, Demi addressed the outpouring of love by thanking everyone who's voiced their support for her open and love-filled Paradise journey. "My DMs are so blown up with love that y’all have drowned out all the hate" she wrote, "It’s 3am and I’m going to bed with a smile on my face. Love you all so much, thank you."

It's so unfortunate to see that Demi has received such ignorant messages after she opened up about her sexuality. But, thankfully, Bachelor Nation has come through with the love and plenty of supportive messages in honor of the reality star to help drown out some of that negativity.